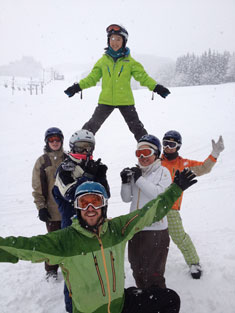 BST students on a field trip to Hakuba.

My father lived through what the Chinese might call “interesting times”. Born in the early 1930s, by the time he entered his 70s he could look back on an unprecedented era of change.

As a boy he learned to plough with a horse; his brothers emigrated from the UK to New Zealand in the 1950s and, just once a year, he booked a long-distance telephone call to speak to them; he watched the assassination of US President John F Kennedy on a grainy black and white 14-inch TV screen—his first.

He never owned a mobile phone or a computer. The world certainly changed in my father’s lifetime, but it is changing so much more quickly in mine.

Throughout his working life, and probably the lives of his father and grandfather too, the skills most workers needed were fairly constant. You had to know your trade, you had to be able to get along with others, work hard, and be professional—which meant being efficient, prompt, honest and fair.

You also had to know how to follow instructions. For a very long time schools have been good at teaching these skills, and no one disputes that we still need them. But the 21st century demands more.

Students of today also need to learn to think deeply about issues, to solve problems creatively, to communicate clearly across a wide range of media, to adapt to ever-changing technologies, and to deal with an almost infinite expanse of information.

The pace of change in our world requires young people to be responsive, proactive—taking the lead when necessary—and prepared to risk making mistakes.

This year the British School in Tokyo (BST) is celebrating its 25th anniversary. A quarter of a century may only be a heartbeat in a country with Japan’s long and distinguished history, but the world has raced on at break-neck pace since Lady Margaret Thatcher declared the school open in 1989, and teachers have had to learn to move just as quickly.

Educators all over the world are now so familiar with the recent concept of “21st-century competencies” that the term has become something of a cliché.

Here at BST, we decided to mark our anniversary by reflecting upon and redefining the education we aim to offer today’s students, by identifying and articulating the skills and personal qualities we feel they will need to thrive in the world they will inherit.

We turned to our wider community for guidance—to our parents and their network, to former students and their parents, and to schools and educational organisations across the world. The result is a series of seven attributes, the hallmarks of a learner who has something of value to offer in tomorrow’s world.

To begin, we believe students should learn balance. I know that it is fashionable these days to talk about passion, commitment and single-mindedness. Admirable though these qualities may be in the right context, it is possible to have too much of a good thing.

A totally committed, single-minded individual with a passionate attitude might turn out to be an Olympic athlete or a brilliant musician; or alternatively, that person may become a blinkered fanatic—or perhaps just a bore.

Let there be no misunderstanding: I am entirely supportive of the wholehearted pursuit of excellence, just not at the expense of everything else.

I know of schools that make it very clear that academic success is all that counts: top grades are all that matter and you can forget about football. These exam factories have their place and I know they often have long waiting lists, but where is the balance?

From this starting point, it seems to be a somewhat natural progression to encourage students to be resilient, inquisitive, thoughtful, independent, self-assured and honest.

These are now the characteristics that define our work and, while the more discerning among you may have noticed that the first letters of the attributes in this list spell out the word British, this is not because we think these are qualities exclusive to a British education; far from it.

These are the characteristics that all young people will need to develop and live by if they are to move confidently and successfully through the rapidly changing world of the 21st century.