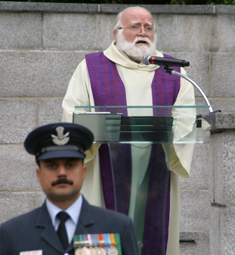 
Whether it is heard at the Cenotaph in Whitehall, London, the Menin Gate Memorial to the Missing in Belgium or at any of the dozens of war cemeteries from Normandy to Singapore and beyond, the Last Post bugle call being played on 11 November never fails to move those who hear it.

The 11th hour of the 11th day of the 11th month was again marked at the only annual Remembrance Day ceremony in Japan, held at the Commonwealth War Cemetery in Hodogaya, Yokohama.

Along with representatives of most commonwealth embassies, the British Chamber of Commerce in Japan, the British School in Tokyo and a number of military associations, Arthur Hawtin, chairman of the Tokyo branch of the Royal British Legion, placed a wreath of poppies before the Cross of Sacrifice in the cemetery.

The ceremony, he later agreed, is always immaculate and poignant.

“This is a very significant war cemetery because it is the only one in Japan”, said Hawtin, a chartered quantity surveyor by profession. “It was constructed by the Commonwealth War Graves Commission for servicemen from commonwealth nations who died in Japan as prisoners of war (POWs) or while they were here with the occupying forces after the conflict”.

Since 1972, when the Tokyo branch was founded, the Legion—motto: “Shoulder to shoulder with all who Serve”—has always been represented at memorial events and, to this day, assists with visits by former POWs or their relatives.

“We are the custodians of remembrance and are very pleased to place flowers on the graves here for people who can’t make the journey by themselves any more”, he said. “The widows of the POWs are all very elderly now, so on birthdays or other special occasions, we will lay flowers, place a cross, a ribbon and a poppy on a grave, take a photo and send it to the widow”.

A member of the branch for 28 years, Hawtin is hoping to attract new members to the Legion, whose membership has dwindled from a peak of around 80 in the early 1980s.

“A lot of people make the mistake of thinking that you had to have been in the services yourself to join the Legion, but that’s not the case at all”, said Hawtin.

“Membership has also declined in the UK so there is a broader membership drive. We have been asked to come up with a three-year plan to increase numbers in Japan”, he added.

Member nations of the commonwealth take turns to conduct the Remembrance Sunday event in Yokohama, with this year’s service organised by the Embassy of India, Tokyo.

Representatives of four religions gave commemorative addresses, with Father Barrie Cairns delivering Psalm 130 and Rabbi Antonio Di Gesu reading Psalm 23—which in part states, “Yea, though I walk through the valley of the shadow of death, I will fear no evil”.

A moving verse from Laurence Binyon’s poem For the Fallen was then read, followed by the crisp notes of the bugler’s Last Post and a two minutes’ silence. Bagpipes were played while the dignitaries placed their wreaths. 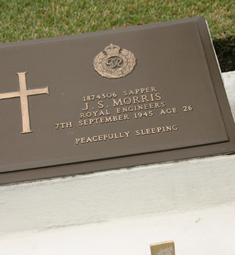 One of many graves in the Yokohama War Cemetery.

The cemetery contains 1,555 commonwealth war burials and commemorations of WWII, including the remains of 53 individuals who have not been identified, as well as numerous special memorials to casualties whose graves have not been located. It also has one grave from WWI and that of a Dutch national, as well as 171 burials from after the war.

The most recent interment is that of Len Harrop, the Australian who was in charge of opening the cemetery and who died aged 95 in February 2011.

The epitaph on his gravestone is a translation of the Latin inscription on English architect Sir Christopher Wren’s memorial in St Paul’s Cathedral: “If you seek his memorial—look around you”.

The cemetery is a carefully tended oasis in the heart of the city, with trees from every member nation of the commonwealth carefully sited around the edges to preserve the tranquillity.

Among regimental badges from the Royal Engineers, the Royal Scots, the Middlesex Regiment and the Royal Navy is that of RAF Aircraftsman Second Class JE Higginbotham, who died on 4 December, 1942, aged 20.

Below it is an inscription that reads, “Whatever else we fail to do, we will always think of you. Mum, Dad and Elsie”.

They shall grow not old,
as we that are left grow old:
Age shall not weary them,
nor the years condemn.
At the going down of the sun
and in the morning
We will remember them.
—from For the Fallen by Laurence Binyon