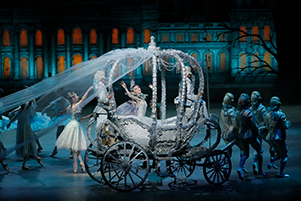 Choreographed by the late Sir Frederick Ashton OM, CH, CBE (1904–1988), famed British choreographer and ballet dancer, Cinderella has been performed by the Royal Ballet, but the National Ballet of Japan is the only company in Japan to have the work in their repertoire. Magical and humorous, this classic story is returning to enchant audiences once again.
PHOTO: HIDEMI SETO