I was sorry to hear that this is the last issue of BCCJ ACUMEN, as I enjoyed being a regular columnist during my time in Tokyo. I want to pay tribute to Simon Farrell for his great contribution to the British community through the magazine, and other roles. And also to David Bickle, who has stood down as the British Chamber of Commerce in Japan’s (BCCJ’s) president. David was a towering figure at the Chamber in so many ways.

I have been back in the UK for just over a year now and am enjoying retirement, though I’m keeping a little busier than I’d anticipated. As you can imagine, Japan remains an important part of my life. Sarah and I even found time to create a Japanese corner in our Surrey garden. 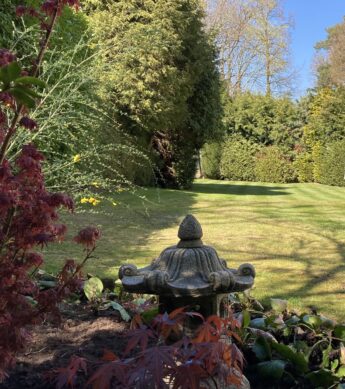 The “Japan Corner” at our Surrey home

One of my favourite roles as ambassador was supporting business, and I’m glad to be able to continue doing this. I am an adviser to several big Japanese companies—Nippon Telegraph and Telephone Corporation (NTT), Mitsubishi Heavy Industries, Ltd. and ESR—and I have enjoyed engaging with them in the UK and Japan and supporting them on a range of issues. My principal business role is as a senior adviser at Stonehaven, the strategic and political affairs company, with offices in London, Australia, Singapore and Dubai. We are working on issues such as trade, climate change and sustainability.

I have been helping them develop their Trade and Asia Pacific practice, which has been exciting. With the UK’s application to join the Comprehensive and Progressive Trans-Pacific Partnership currently underway, there is renewed interest in the region among British businesses. Having lived in the Asia–Pacific for around 20 of the past 30 years, this is something I am keen to encourage.

In January and February, Sarah and I spent five weeks in Australia where I had been High Commissioner from 2011 until 2015, before Tokyo. It was great to catch up with many friends from the government and business communities there.

I was invited to give a talk to the Australian British Chamber of Commerce. Fortunately, I was able to recycle some of my jokes which, unlike the BCCJ, they hadn’t heard before. There is much enthusiasm for the strengthening of the security relationship as a result of the AUKUS agreement, signed by the Australian and British prime ministers and US president last September. The main focus is helping Australia to develop a nuclear-powered submarine fleet, which will significantly enhance its reach and capabilities in the Pacific. This is something that Japan has very much welcomed.

This March I visited the Dubai Expo, postponed from 2020 like the Tokyo 2020 Olympic and Paralympic Games. Both the Japanese and UK pavilions there rightly won much acclaim. I have been interested in Expos since leading the UK pavilion at the Aichi Expo in Japan in 2005. On my last visit to Osaka before leaving Japan, I visited the Expo 2025 headquarters and, from their office, looked over the site where it will take place. I am sure it is going to be a great success. 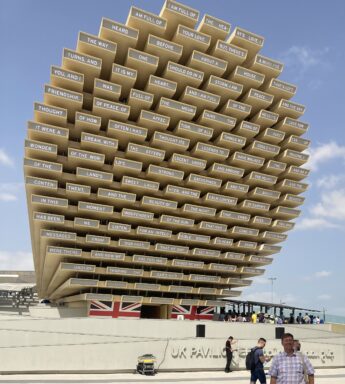 The UK Pavilion at the Dubai Expo in March

I have also been pleased to continue some of the academic links that I was involved in promoting as ambassador. I have been appointed a visiting professor at Keio University, and delivered my first semester of lectures on International Relations in autumn 2021. Sadly, travel restrictions meant these were all done via Zoom. That was disappointing as I would like to have had more direct engagement with the high calibre Keio students. Hopefully this year I’ll be able to be there in person. Preparing the lectures was hard work—I have been a practitioner in the field for decades but found I had to do a lot of background reading to bring the necessary academic rigour to the subject. Sometimes I found myself reading some learned text and thinking “I wish I’d known that when I was an ambassador”. And I had my first “essay crisis” for many years when I had to mark 126 essays in a few days.

I have also joined the Japan Studies Centre at the University of East Anglia (UEA) as an honorary senior adviser. Thanks to the generosity of the Sainsbury family, the UEA now hosts the leading centre for Japanese arts in Europe. It is always a pleasure to go up to Norwich, which was the second-most important city in England during the 14th century because of the wool trade, as attested by the continuing presence of many ancient churches and pubs. Last November I was at the UEA for a lecture by Rebecca Salter, president of the Royal Academy of Art, who learned her printmaking skills when living in Kyoto in the 1970s and ’80s. I have also just been appointed to the board of the UK–Japan 21st Century Group.

Some of you may remember my “Sankyuu Japan” Twitter campaign in my final months in Tokyo, when I introduced 39 of my favourite things about Japan. I decided that it would be a shame to stop tweeting on retirement (though my 30,000 followers might well have welcomed me doing so). But it’s not my place to tweet about government policy anymore, so I have started a new “Go Si UK” campaign, introducing 54 of my favourite things about the UK to a Japanese audience. I’ve written a book about “Sankyuu Japan”, including the sometimes-comical replies I received from Japanese followers. It should be coming out soon. If it sells as well as my book of Japan poems, Fried octopus instead of sticks of rock, I might be able to afford to buy a bowl of ramen next time I’m in Tokyo.

Japan featured large on our TV screens last year, when Tokyo did a great job of hosting the Tokyo 2020 Olympic and Paralympic Games, despite all the constraints of Covid-19. It was pleasing to see both the UK and Japanese teams doing so well. Hopefully, it will have piqued the curiosity of viewers, encouraging them to visit Japan as tourists when they can. 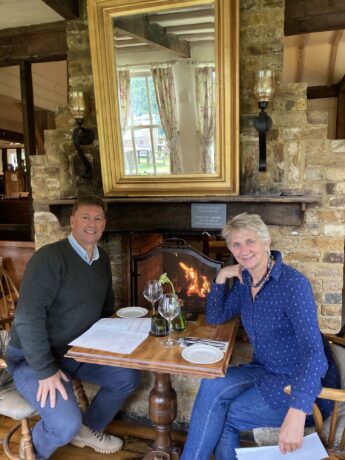 Enjoying an English pub lunch with my wife Sarah

The UK hosted two big international events last year. The G7 in Cornwall in June was attended by Prime Minister Yoshihide Suga. By chance I stood on the same sandy beach at St Ives, a few weeks later, as part of a wonderful Cornish holiday. And new Prime Minister Fumio Kishida headed to Glasgow in November, hot on the heels of his election victory, for the COP26 Climate Change summit. By another coincidence I’d been in Glasgow a few days before, watching a football match with Stuart Gibson, CEO of ESR, and a major shareholder in Glasgow Rangers.

That’s about as close as I get to international summits nowadays. But I know the British Embassy Tokyo is in great shape in the hands of Julia Longbottom CMG (Page 6-7), and I’m contentedly watching from afar, whilst maintaining many links to Japan. See you when I’m next in Tokyo.

Enjoying an English pub lunch with my wife Sarah