Within 18 months, we had gone monthly. Recessions and an earthquake knocked us back, before we recovered to resume 12 issues per year. We finally decided to pull the plug after weighing up damage to the environment and our bottom line: some readers want online only, others want paper; a few want both, but not enough advertisers want either.

Along with most modern media, ACUMEN publisher Custom Media has graduated to an almost exclusively online presence, using innovative, diverse digital platforms such as video, websites, social media and other creative business solutions to help market entry and expansion in Japan and abroad.

My huge thanks and respect to our loyal writers—especially prolific Telegraph correspondent Julian Ryall—editors and photographers for their professionalism and patience dealing with my often-difficult ways. And our much-respected proofreader.

But the main reason we have lasted this long is Robert Heldt. Without advertising, there would have been no ACUMEN. And it has been my friend and co-founding CEO of Custom Media who created, trained, managed and mentored several iterations of our dedicated sales team and selflessly ran the business side of ACUMEN and Custom Media so well for 12 years or so. 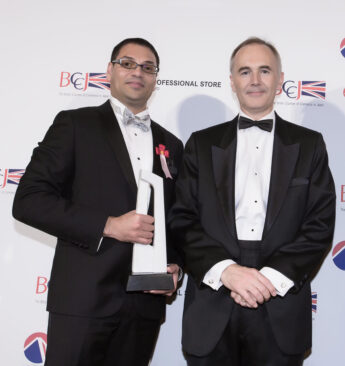 Our largely British-run NPO partners have taught us much about empathy, community and humanity. In alphabetical order, we defer to the amazing founders, volunteers and staff who run Animal Refuge Kansai, Knights in White Lycra, Mirai no Mori, Refugee Empowerment International, Sego Initiative, Shine On! Kids, TELL, and the newest one that promotes the oldest cause, the William Adams Club.

We’ve had a few. As a diverse, family-friendly, monthly membership magazine for the British community in Japan, we had few scoops or, thankfully, complaints. There was the Michael Woodford MBE interview just before his dramatic exit from Olympus Corporation in 2011. He spilled the beans on some creative bookkeeping soon after having been appointed president and CEO, thereby rocking corporate Japan. And it always feels great to beat the opposition as we did in 2014 with the new EU ambassador to Japan. The interview now looks rather dated due to Brexit.

The only letter of complaint we received came in 2012 from “disgusted” of Scotland, who objected to our “explicit” cover image of a Paralympian posing semi-nude with her prosthetic leg for a calendar. By “selling her body” she hoped to fund her dream trip to London 2012. Maya Nakanishi has since been the subject of a book by a respected author, mentored fellow Paralympians, inspired many others, and smashed a few track records.

We also featured internet inventor Tim Berners-Lee and a number of famous actors, musicians, politicians, athletes and other VIPs. And who wouldn’t enjoy sunset cocktails (albeit gin and tonic with no ice or lemon) on Royal Navy ships during historic visits to Tokyo Bay?

And it’s goodbye from him …

Fortunately, except when occasional contributor and former BCCJ Executive Director Ian de Stains passed away in 2018, I have not had to write an obituary for an ACUMEN writer. Until now. Henry Scott-Stokes, who died on 17 April, wrote for ACUMEN until Parkinson’s disease ended his random visits to Custom Media to pitch stories, drop off invoices and enjoy a cup of tea. In the early 1960s, he was the first Tokyo bureau chief of the Financial Times and he later ran The Times office here. Raconteur Henry was colourful, traditional and a rare gent. His most recent piece for us was in our 2012 Queen’s Silver Jubilee special, so it is fitting indeed that Henry’s obituary features in our last hurrah that also marks the 2022 Queen’s Platinum Jubilee.

Incidentally, the Silver Jubilee issue also featured a final foreword by then-British Ambassador Sir David Warren KCMG (2008–12), who returns to write for us in this issue. Despite unfortunately breaking his arm soon after having accepted my request to contribute, Sir David displayed his trademark stoic professionalism by honouring his word to deliver the piece on time and in great form. We also welcome back former British Ambassadors Sir Tim Hitchens KCVO, CMG (2012–16) and Paul Madden CMG (2017–2021), who both kindly agreed to share their anecdotes and best wishes with readers in this issue. And, of course, we are also very grateful that current Ambassador Julia Longbottom CMG agreed to write a special foreword.

Finally, Japan awarded two Britons the Order of the Rising Sun, Gold and Silver Star on 29 April. Our congratulations to Mary Howarth Arden, 75, from London, for helping strengthen the bilateral “relationship and mutual understanding … in the field of the judiciary”. Arden was a justice of the UK Supreme Court and, for England and Wales, a judge of the Court of Appeal and head of International Judicial Relations.

Also gonged was Venkatraman Ramakrishnan, 70, of South Cambridgeshire, for helping promote bilateral “research exchange and science and technology cooperation”. Ramakrishnan is a former president of the Royal Society and 2009 Nobel Laureate in Chemistry.

I look forward to keeping in touch with BCCJ members, as well as BCCJ ACUMEN readers, contributors, advertisers, vendors, partners and other friends.