Avid readers of satirical British news magazine, Private Eye, will know the poems beginning “So, farewell then..” which appear whenever a famous person passes away. The last issue of BCCJ ACUMEN similarly marks the end of an era. President of the British Chamber of Commerce (BCCJ) David Bickle OBE, Executive Director Lori Henderson MBE and even BCCJ ACUMEN are soon to be gone.

I was lucky enough to be British Ambassador to Japan between 2012 and 2016, and can only say that David, Lori and ACUMEN were an integral and wonderful part of the scene then. I arrived just before Tokyo won the bid to host the 2020 Olympic and Paralympic Games, and soon after they had been awarded the 2019 Rugby World Cup, so sport was constantly in the air. 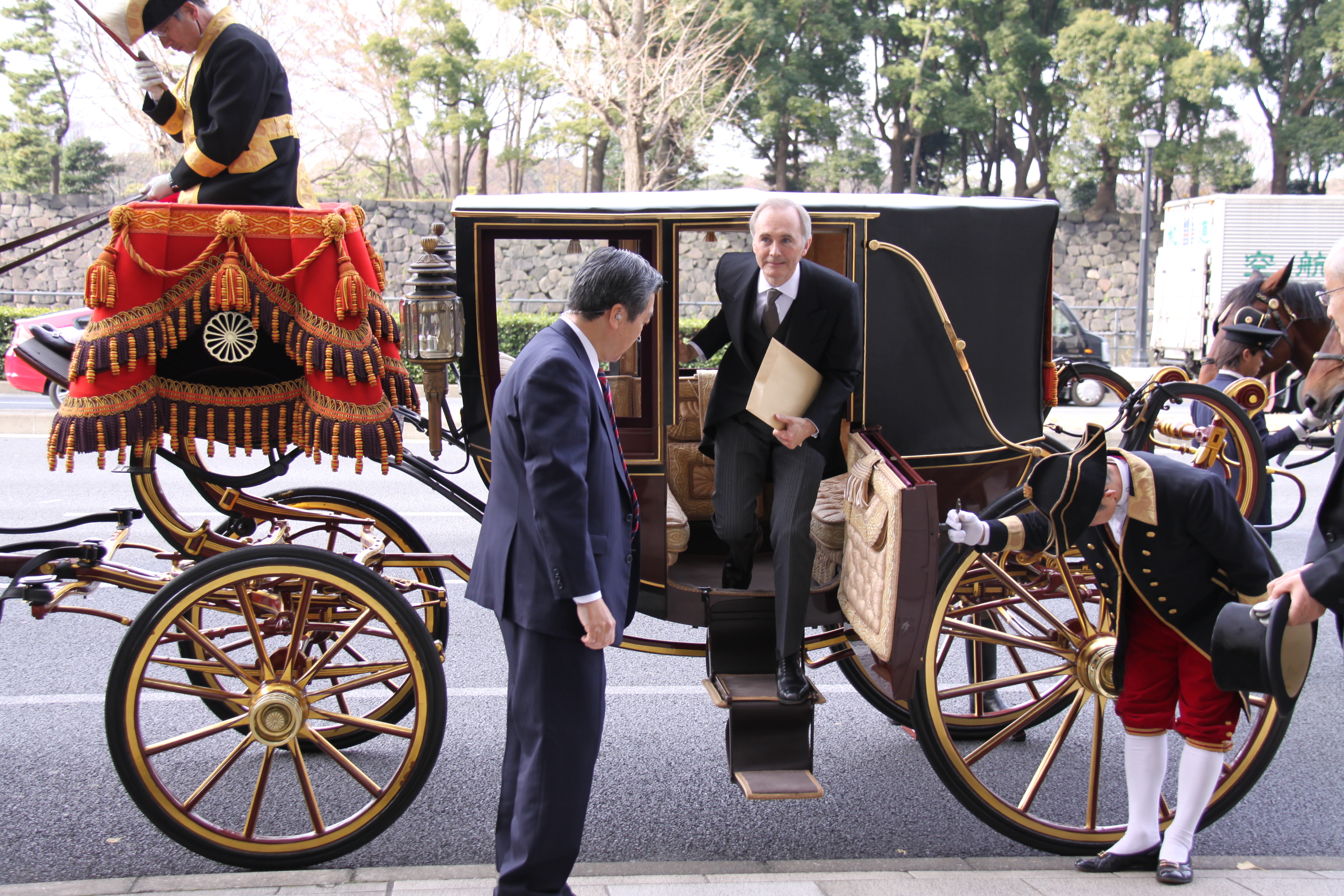 Arriving to present his credentials to the Emperor of Japan in 2012.

It was difficult to forget about rugby whenever David was in the room. He was a constant reminder of the power (to say nothing of the height) of the game. We were lucky enough to have the Welsh and Scottish teams visit during my time. I remember the Scots towering over us all, charming giants. And the Welsh coming to Tokyo and playing Japan only to be beaten—the first time the Japanese national team had managed to win against one of the major league teams. I was in the box applauding the well-deserved victory when I looked over to the Japanese management team—including former Prime Minister Yoshiro Mori—and they were all in tears! Mori described to me how he liked the awkward bounce of the rugby ball, a much better metaphor for political life than the smooth trajectory of a football.

The early days of preparing for the Tokyo Games were also among the most enjoyable. There is a convention that a special bond exists between the most recent Games host and the next host. By the time an Olympics is four years away, most of the big decisions should be already taken, but eight years away, you can take time to think and share deeply. We enjoyed Sebastian Coe’s visits in particular. 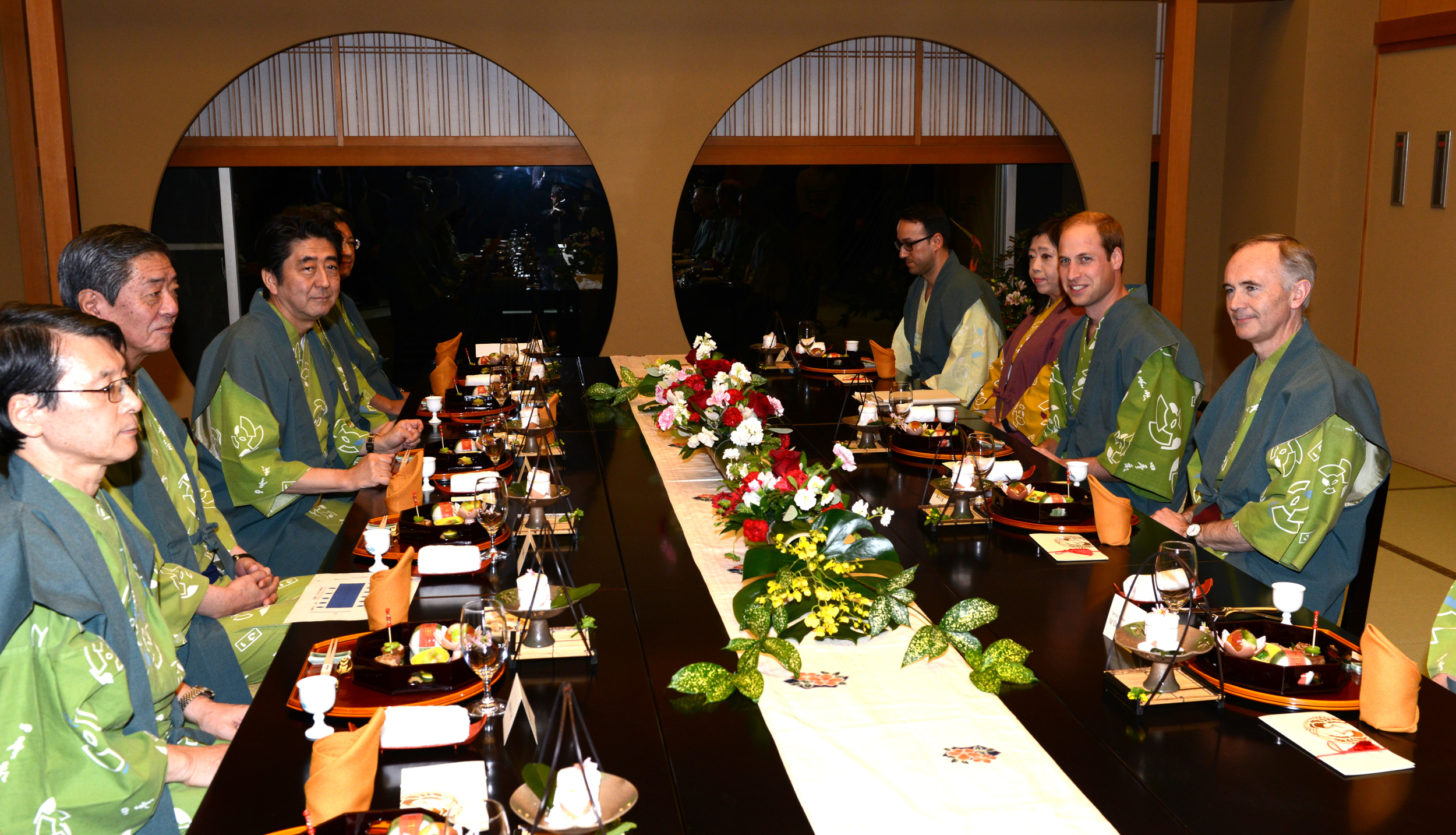 With Prince William, the Duke of Cambridge, and then-Prime Minister Shinzo Abe in 2015.

Less enjoyable was the whole business of Brexit. For my first years the British government, having made the fateful decision to call a referendum, were eager to get widespread support from Japanese investors and politicians for the proposition that Brexit would be a disaster for Britain, and especially Japanese investment in the UK. I duly lobbied hard, and we were very pleased at how many companies and politicians set out in public (in a way which we’d not expected) their grave doubts. All that was to be in vain, of course, and it was in the early afternoon of the results day that we heard that Sunderland, site of the major Nissan Motor Co., Ltd. investment, had voted a clear “no”. The die was cast, and my task for the last six months of my time in Tokyo was to persuade investors and government that the situation was nowhere near as gloomy as I had been confidently predicting only weeks before. History will judge which position was right, but it was a moment when the job of an Ambassador—to reflect the policies of the current government—was particularly challenging.

Being part of the British community in Japan and trying to represent it to the best of my abilities was always a joy and a privilege. HRH Prince William, Duke of Cambridge’s visit was a highlight—including his visit to Fukushima Prefecture. Boris Johnson’s famous tackle of a schoolboy on a Tokyo pavement was, I’m afraid, on my watch. The ups and downs of UK–Japan life were a rich experience. They are behind me now, as I sit looking out over a fleet of punts at Wolfson College Oxford, which I now run. But they, like BCCJ ACUMEN, will remain as warm memories of a special time.