The worldwide spread of Coronavirus has cast a long shadow over all our lives. As I write, many countries including the UK are in effective lockdown, with big impacts on global economic activity. A combination of travel bans by different countries, and massive reductions in airline schedules means that international travel is grinding to a halt. Many events, including the Emperor’s State Visit and the Olympics & Paralympics have been postponed. People fear for the health and livelihood of loved ones.

The Coronavirus, which began in China, first hit Japan signi­ficantly in February. When the US-owned Diamond Princess cruise ship arrived in the Port of Yokohama, it appeared that a passenger who had previously left the ship in Hong Kong had reported positive for the coronavirus. Initially the medical consensus was that the best place to quarantine fellow passengers and crew was on the ship. But as the number of cases on board began to rise, eventually to more than 700, the United States, the UK and other countries decided to evacuate their citizens.

It was a very complex operation. Because of the high poten­tial that the travellers might infect others, it was necessary to establish complicated arrange­ments to handle the disembarka­tion from the ship and transfer to the plane—as well as arrang­ing for a quarantine site on arrival back in the UK. The Embassy went into 24-hour, three-shift working.

Meanwhile, our consular team were in regular touch with the 79 British passengers and crew. We worked to support those who tested positive, were hospitalised onshore and remained behind to recover after the evacuation.

There was much media coverage back in the UK, particu­larly of those passengers who assumed a high profile on social media. I had many Japanese people commenting on my Twitter account, including quite a few who criticised the BBC for referring to the “Japan cruise ship crisis” in a headline, which they inter­preted as meaning a “Japanese ship,” whereas I think a native speaker would under­­stand it as a “ship in Japan”. It was a salutary reminder of the comple­xity of working across cultures and languages.

Since then we have seen a massive increase in incidence of the disease all over the world. Governments in many countries have had to take very tough decisions to protect the health of their citizens and maintain the viability of their health systems. This includes unprecedented measures to restrict people’s mobility, and major economic packages designed to reduce the impact on national economies. It has had a big impact on people’s lives, but our citizens are acting responsibly in respecting the need for social distancing. At the Embassy we have cancelled or postponed many of our planned activities and most of our staff are working from home, assisted by technology in ways that would not have been possible until relatively recently.

Internationally, countries have introduced increasingly strict controls on movement of people across borders, at first extensive self quarantine procedures on arrival, then outright bans. This meant that airlines massively reduced their flight schedules. In March, the UK recommended against all non-essential overseas travel, and then recommended that Britons who lived in the UK but who were currently overseas on holiday or business trips should return urgently to the UK because of the risk of getting stranded. This did not apply to Brits living permanently overseas. Meanwhile Japan removed the visa waiver for travellers from European countries including the UK, which effectively ended tourist visits.

All of this has led to uncertainty among expatriate communi­ties overseas. But many Brits living in Japan have been here for a long time, have Japanese partners and know the local system well. They have lived through various natural disasters and respect the quality of the Japanese healthcare system.

The top priority for the British Embassy and our Consulate General in Osaka is the safety and welfare of British citizens. The situation will no doubt continue to evolve in Britain, Japan and internationally. Please follow local authority guidance including on personal hygiene measures. And continue to check our Foreign & Commonwealth Office travel advice on gov.uk.

February had begun reasonably normally in Japan. As part of our UK in JAPAN 2019–20 campaign, we held our Clean Growth GREAT Week from 17 to 28 February. There were a whole series of events—covering a variety of aspects of clean energy—which brought many hundreds of participants into the Embassy. 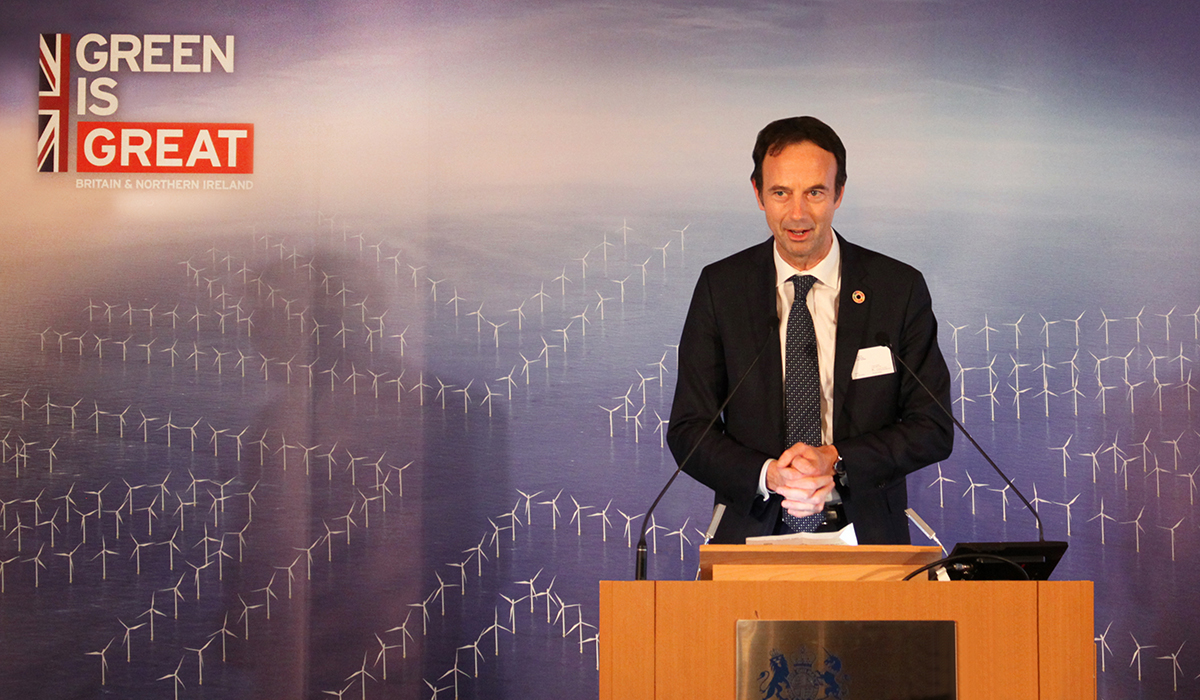 At the launch event, I was able to introduce both Alex Chisholm (above), the Permanent Secretary of the Depart­ment of Business, Energy and Industrial Strategy (BEIS), and John Murton, the UK envoy to the United Nations COP26 climate change conference. They both spoke compellingly about the UK’s commitment to decarbonising its economy and the need for others, including Japan, to increase the level of their ambition in time for the COP26 meeting in Glasgow in November. John made the same point in an interview on NHK.

Other individual events promoted Japanese energy invest­ment in the UK and UK exports of offshore wind tech­no­logy to Japan. We also hosted a seminar on nuclear decommissioning, which has been a big growth area for UK firms here since the Fukushima incident. A trade mission of UK energy firms visited Japan and took part in a seminar on improving access to energy in Africa, in which the Japan International Cooperation Agency and Japanese business also participated. We announced that Japan’s Albatross Technology, which works on offshore floating wind energy, had won our Energy Tech Rocketship Award, giving them a free trip to the UK to identify opportunities to develop their business there. And the British Council launched a climate change essay contest for school students. Perhaps this will help find the Japanese Greta Thunberg?

During the same period, Foreign Office Political Director Richard Moore visited for a range of talks on foreign policy issues—from North Korea to Iran to Syria—with counterparts across the Japanese system. 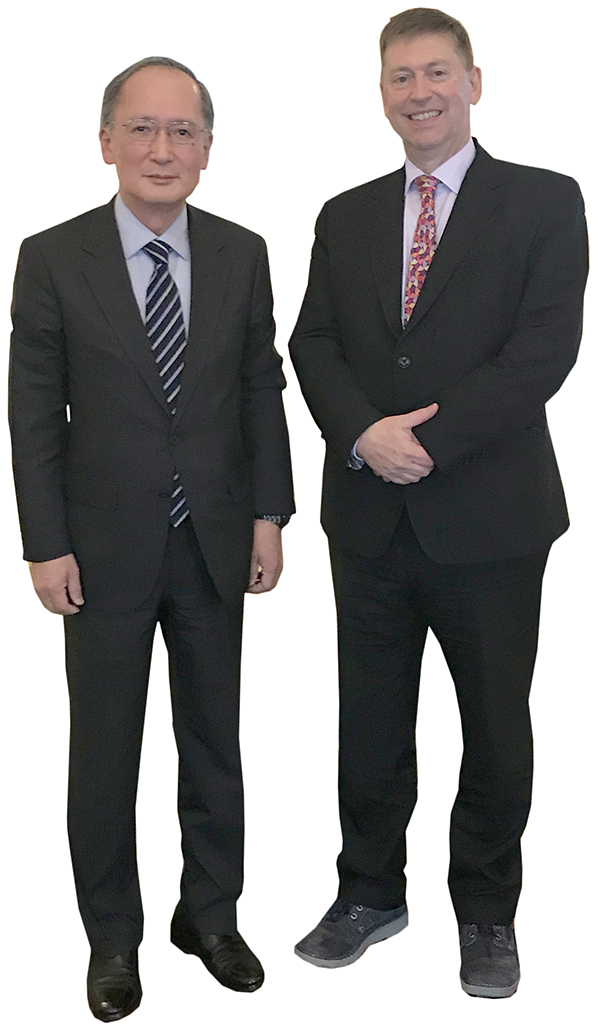 Visits to UK and West Japan

In early March, I was back in the UK for a series of meetings. I had calls at Buckingham Palace. The new Japanese Ambassador in London, Yasumasa Nagamine, kindly invited me round for lunch. He is settling in well in London and enjoying being back in the country once again.

I gave the annual Ambassador’s address to the Japan Society of the UK, hosted by Nomura International in the City, an opportunity to describe what has been happening in Japan over the previous 12 months. I was pleased to be able to report that UK–Japan relations were still going from strength to strength. Afterwards there was a lively Q&A chaired by the Society’s president, Bill Emmott (formerly editor-in-chief of The Economist).

I particularly enjoyed visiting the big Kimono: Kyoto to Catwalk exhibition, which had just opened at the Victoria and Albert (V&A) Museum, with Anna Jackson, who had curated it. It was a fascinating look at the huge impact the kimono has had on global fashion from the earliest days of Japan’s contacts with the West.

I also visited Mitsui Fudosan Co., Ltd., the Japanese real estate giant, for a briefing on their property interests in the UK. Fresh on the heels of their highly successful redevelopment of the former BBC site in White City, West London, they are now working on the plans for a new British Library extension in the dynamic tech hub area around King’s Cross Station, right next to the very impressive Francis Crick Institute for bio­medical research.

In March I visited Nagoya and Kyoto, meeting the Governors of Aichi and Kyoto prefectures, as well as investors, academics and media. We discussed coronavirus, local economic developments and opportunities in the UK.