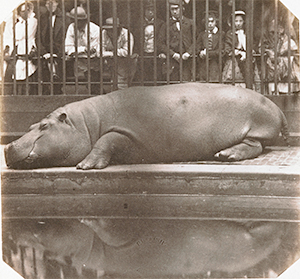 The Origin of Photography: Great Britain

Every spring, the Tokyo Photographic Art Museum holds an exhibition showcasing some of the earliest photographs ever taken. Presented this year will be some of Great Britain’s first, showing the varied developments in photographic culture that took place in the UK during the late 19th century.
PHOTO: DON JUAN, COUNT OF MONTIZON, HIPPOPOTAMUS AT THE ZOOLOGICAL GARDENS, REGENT’S PARK, LONDON, 1852, BRITISH LIBRARY © BRITISH LIBRARY BOARD (C.43.I.7)