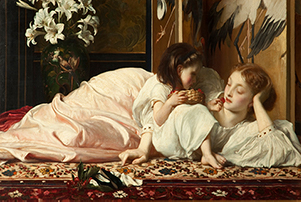 Beginning in 1848, British art was shaped by a group of painters, poets and art critics known as the Pre-Raphaelite Brotherhood. Some 150 Pre-Raphaelite items will be on display at the Mitsubishi Ichigokan Museum to mark the 200th anniversary of the birth of John Ruskin, the Victorian-era English art critic who supported the Brotherhood.
ARTWORK: FREDERIC LEIGHTON, MOTHER AND CHILD C.1864–5 (OIL ON CANVAS 48.2 X 82CM) ©BLACKBURN MUSEUM AND ART GALLERY