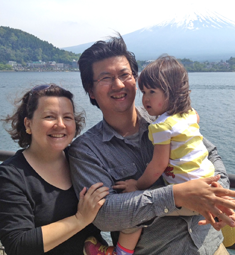 Hudson: no choice but to remain in Japan.

British nationals living outside the European Union are up in arms over new immigration rules for foreign spouses that, they say, make it difficult—and, in some cases, impossible—to return to the UK to live.

And given the minimum-earning requirements, the hurdles are even higher for women who are married to foreign men.

The new regulations went into force in July 2012, with the Home Office claiming the rules were designed to ease the burden of migration on the British taxpayer.

Under the tightened rules, a British citizen must show that they will be able to earn at least £18,600 per year to sponsor their non-European spouse’s visa. This figure is raised to £22,400 for families with one child and an additional £2,400 for every extra child.

The regulations mean that couples have been forced to live apart, while children—including those with British passports—have been separated from parents.

Many of the thousands of people affected by the Home Office decision are in Japan.

Gillian Hudson first came to Japan with the Japanese government’s Japan Exchange Teaching Programme and worked in Kyushu. After returning to the UK, she met Tsuyoshi Okuma. They married in 2004 and lived in London. Two years later, they returned to Japan after Hudson had been awarded a scholarship by the Ministry of Education, Culture, Sports, Science and Technology for post-graduate studies at The University of Tokyo.

The couple has a three-year-old daughter and a newborn baby, and 36-year-old Hudson has a number of part-time jobs, including one at a Japanese university.

“With two kids I will need to secure more like £25,000 per year, after a break from the UK job market for eight years, possibly longer”, Hudson told BCCJ ACUMEN. “And of those eight years, two were spent studying and two as a full-time mum and housewife.

“I don’t think I can return to the UK job market straight into a much higher paying position”, she explained.

In addition, with two young children, Hudson doesn’t want to be the full-time wage earner in the family—although the British government’s rules require that she be the breadwinner.

An added problem is that the regulations require the applicant to hold the job for six months before even applying for a spouse visa, which can then take a further six months to process, meaning that the family is effectively separated for one year.

“This is totally unacceptable”, she said, and added that she feels angry, sad, stressed, rejected and bitter.

“I feel exiled from my own country. It’s crazy”, she said. “We have always planned on moving back to the UK. It’s important for our children to experience life in both Japan and the UK in order to fully understand who they are, form relationships with both extended families, and have enough language competence in both Japanese and English”.

Hudson said she has no choice but to remain in Japan for the foreseeable future, but hopes that rules might change.

“It’s very depressing not to have the choice to return to my own country when I need to”, she said. “When I married my husband, I never imagined the consequences would be to lose my right to a family life in the UK”, she added.

The UK’s All-Party Parliamentary Group on Migration is calling for an independent review of the minimum income provision in the regulations, but a spokesman for the Home Office told BCCJ ACUMEN that the changes were only implemented last year and there are no plans to rewrite them.

“British citizens can enter into a relationship with whoever they choose”, Daniel Lyons said. “But we believe that those wanting to establish their family life in the UK should be able to support themselves financially and not be a burden to the taxpayer”.

An unnamed source said her fiancée, who has a PhD and works as a researcher at a university in Japan, would not be a burden on British taxpayers, but the rules on income make it impossible for her to act as his sponsor.

“I would love to go back to the UK”, she said. “My brothers and sisters are having children and I am missing [out on] them growing up. But to [return to the UK] I have to have a job earning over £18,000”.

When the 35-year-old returned to the UK in 2010 she spent a year applying for jobs, but the economic situation meant that opportunities were severely limited—and there was nothing similar to the good teaching position she held in Japan.

The pressures of this predicament have affected her health and she has been diagnosed with multiple sclerosis.

“The stress I feel about not being able to return home affects me nearly every day”, she said. “I am sad to say that the whole thing makes me feel rather unpatriotic. It seems as though other people are welcomed into the UK while I have been exiled”.

Pressure is building among women who are affected by the regulations, with thousands of people signing an online petition started by Marianne Bailey—whose Japanese husband will have to leave the UK just days before their first child is due to be born—and addressed to Home Secretary Theresa May.

There is, however, a loophole in the British government’s rules.

In what has become known as the Surinder Singh route, after a historic court case, a British national who works elsewhere in Europe for three months has the right to bring a non-EU spouse into the UK without having to meet the minimum-earnings requirement.