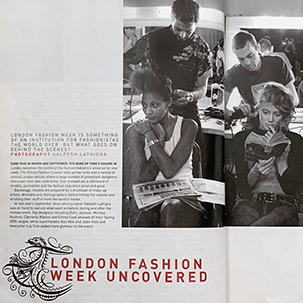 My career as a hairdresser has taken me to London and brought me to Tokyo. Both cities have similar tastes and synergy when it comes to hair styling, and they have influenced my approach and guided my career.

The requirements of my clients in Tokyo are almost the same as back in London, where I worked in the Mayfair area. The majority of our regular clientele there were entrepreneurs, diplomats, businessmen, housewives and artists. It is about the same here in Tokyo at our FA Salon.

Outside the salon, however, things are different. In terms of hair-related events, such as educational sessions, backstage work, or photo shoots, the Japanese hairdressing industry is—as one would expect—culturally more tailored to Japanese tastes.

The industry in London offers hair­stylists of different nationalities more—or perhaps is more welcoming. This allows hair­dressers there to express themselves more and to develop different styles. As a result, British hairdressing is more competitive and distinctive.

In London, there is a wider range of hair types than in Tokyo, where it is mostly about Asian hair. However, what is suitable for Japanese and other Asian hair differs from what is best for Western hair. The local Japanese hairstylists’ preferences seems always to skirt natural Asian beauty, working with matte and light colours. Meanwhile, the other non-Japanese stylists and I value and even prefer to work with the innate Japanese beauty.

My first visit to Japan was in 2004, and my curiosity for exploring new things related to hair gave me the impetus to look around. I wanted to see what the hairdressing industry was like here, what it offered. A few times, I came across something interesting, such as traditional volume used for hair-setting or super vibrate or crazy colours. But, many times, the things I found were not to my taste or inspiring.

I come from a small city in Italy called Giffoni, located just inland on the Amalfi Coast. The city is known for one of the most famous film festivals for children. It was in Giffoni that I began my hairdressing life, helping my father during summer holidays. This kept me off the streets during school breaks.

I wasn’t inspired to become a hairdresser. The job chose me, but later became my passion. My father and I used to travel around Italy for hair competitions and seminars, since he was also the art director for an academy back home. At the age of 18, I was travelling to Florence with a friend when, for fun, I walked into a hair salon to see if there were any job vacancies. They offered me a junior stylist position right away. Soon after, I left the job at my father’s salon and moved to Florence, where I stayed for six months before moving to Bologna to join a new hairdressing firm.

I worked in Bologna for five years and greatly advanced my skills and career. One day, the firm got a job for the BBC television drama, The Best of Both Worlds, which was being filmed in Bologna. The salon owner sent me to join the UK team. I did hair backstage, and it was a great experience that motivated me to learn English and discover the British hairdressing industry.

After doing some research, I decided in early 2001 to move to London. Within a few months, I had learned enough English to go for an interview at the head office of famed hairdressers Toni&Guy. I soon took a test to enter their academy and, after six weeks of assessments, became a stylist. I was assigned to their flagship salon in Mayfair. I worked there with the family—Toni Mascolo and his brother Anthony—and other amazing hairstylists for about five year. This included two years as an instructor at their London academy.

In December 2005, I got a job offer to work in Tokyo as a hairstylist, but did not consider it since my career in London was going well, at both the salon and the academy.

That year I got married in London. My wife was just finishing her course in aromatherapy, and we had plans to either start a business together in Italy or stay in London. But, before we could decide, something inside me told me to try Tokyo. So, we moved to Tokyo in spring 2006. After a couple of years, the city became home and I got very busy at work. The opportunity gave me many different experiences, including running an international hair salon and doing the hair of famous people for events in Japan. One of the biggest events—and my very first—was the U2 concert at the Saitama Super Arena, in December 2006.

When it comes to client tastes, they have remained more or less the same for me since I opened the FA Salon in 2016. Western clients represent about 95% of our clientele. Many of them—especially blond women—feel frightened when approaching a hair salon in Japan.

Our customers return because we are constantly updating our offerings to keep pace with what is happening globally. I occasionally work for hair shows, such as those involving Dior, Miu Miu and Valentino, which allow me to bring more Western knowledge to our salon.

This is especially true in terms of hair colour. When it comes to blond hair, we are very busy working with balayage, a technique in which the colourist paints highlights—including blond, platinum and pastel colours—in such a way as to create a graduated, natural-looking effect.

We stay up to date, study new techniques and provide the best hair care products, which is what keeps our clients coming back. They travel to and from major cities around the world, so it is imperative that we be competitive. I always tell my staff that we are not just a salon that is client-friendly because we speak English. We must offer the best service and techniques to allow each customer to embrace the cut and colour that best suits them.

Of course, we have Japanese clients as well, and they look for what we offer as an international salon. We always accommodate their requests and welcome them. 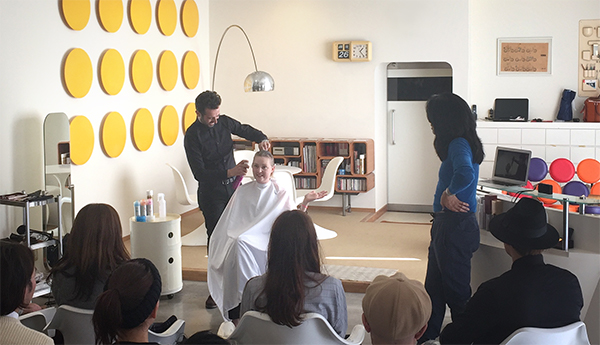 Alfano teaching at a hair seminar and workshop in Gunma Prefecture.