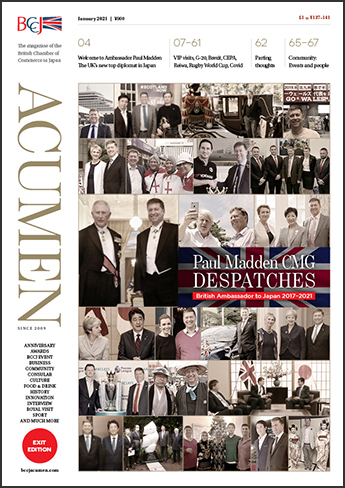 On behalf of Custom Media, the British Chamber of Commerce in Japan (BCCJ), the UK community and the many Anglophiles here, a big thank you, well done and all the best to Paul Madden CMG.

The outgoing British Ambassador to Japan has given us a fascinating and rare insight—through his regular BCCJ ACUMEN column, “Despatches”. Reprinted in this special issue is a cavalcade of all those informative pieces, about how govern­ment has been working during a particularly engaging era for UK–Japan ties, marked by Brexit, the subsequent trade deal, a levelling of the playing field in bilateral trade and, among other challenges, the debilitating effects of Covid-19.

Ambassador Madden has supported a regular flow of royals (Princes Charles and Harry, Princess Anne); politicians (including Prime Ministers Theresa May, Boris Johnson and Shinzo Abe); sport stars (England, Wales, Scotland and Ireland teams for the Rugby World Cup 2019); and too many cultural and business VIPs to mention here.

Since 2018, he has presented trophies to winners at the annual BCCJ British Business Awards, and will be remembered by many for his humour and warmth. But it’s not all glamour and cocktails. Down-to-earth Ambassador Madden also toured the spartan Fuchu Prison and met a British inmate there. This duty is usually performed by consular staff, rather than the UK government’s top representative in Japan who directs and oversees politics, trade, investment, media, cultural affairs, visas, consular services and other key operations.