How 3/11 affected the insurance industry and consumers

At magnitude 9.0, the Great Tohoku Earthquake was one of the largest in Japan and, indeed, the world, with the insurance industry taking a major hit. While media attention soon turned to the Fukushima Daiichi Nuclear Power Plant, it is the earthquake and tsunami that took not only a terrible toll of human life, but also caused potentially the world’s largest economic loss from a natural disaster.

The cost is estimated at about $300bn, of which $25–45bn is believed to have been insured and 30–40% of that will have been reinsured in overseas markets. The tragedy attracted as much attention in the global insurance and reinsurance industries as in the community at large.

Immediately after the earthquake, the priority for insurance firms and insurance brokers was to maintain operations and contact clients. While it was too early for many clients to be able to assess their losses, it was important that they be given clear instructions on what action to take to initiate the claims process. Access to the Tohoku region was limited and difficult for the first few weeks, so it was initially impossible for many insurance firms to assess their losses in the region. 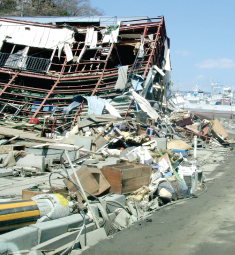 Certain firms were able to maintain full service from the Monday after the Friday earthquake, while others needed a little more time. Some larger foreign insurance firms tested their Business Continuity Plans by relocating staff to places such as Hokkaido and Osaka, even though their Tokyo operations were functioning, and mobile-phone numbers of key staff were widely distributed.

Earthquakes are excluded as a peril in standard insurance policies, but can be added for an extra premium. The earthquake endorsement includes cover for earthquake shock, as well as fire following an earthquake, tsunami or volcanic eruption, and other consequential perils. The cover is not inexpensive, which accounts for the rather low take-up and percentage of total insured losses (10–15% of the economic loss).

Houses in Japan can be covered under the government-backed Japanese Earthquake Reinsurance (JER) scheme. Insurance firms issue policies to consumers and reinsure these with the JER plan. Their losses are capped at a certain level, with the government taking more risk when losses are high.

Commercial enterprises have the option of insuring against earthquake. Some insure for full value, while others set a loss limit. Because the cost of such insurance is not cheap, the decision whether to insure varies from company to company. But it is important to remember that, in Japan, a normal fire-insurance policy will not cover fire following an earthquake unless the earthquake cover has been added to the policy. Fire following the Great Hanshin Earthquake of 1995, for example, was a major cause of loss.

While the insurance loss was small in relation to the economic or human cost, it was still a major event for the industry worldwide. Consequently, premium rates have been rising, with average increases of between 20% and 50%.