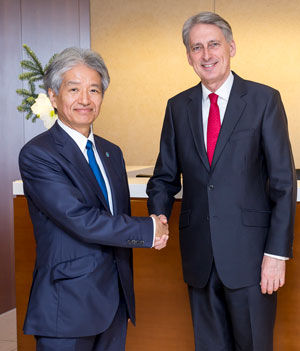 British Chancellor of the Exchequer Philip Hammond used a visit to Tokyo in mid-December to try to reassure firms in Japan’s financial services sector that the UK will do its utmost to negotiate the best possible access to the markets of the European Union (EU).

After talks with business leaders and senior government officials on 15 December, Hammond told reporters his visit had three main aims.

“First, I have been seeking to cement the UK–Japan bilateral relationship”, he said. “Japan is Britain’s second most important foreign direct investor, after the US, so this is a very important relationship for us”.

Second on his list were discussions, including with Chief Cabinet Secretary Yoshihide Suga, on financing for a nuclear power project in Wales that could total some £12bn and regarding which negotiations are ongoing.

Hammond said Japan’s proposals are being analysed in London and that “fruitful discussions” were expected when Greg Clark, the secretary of state for business, energy and industrial strategy, visited Tokyo later in December.

But arguably the most important element of Hammond’s visit revolved around London’s message concerning Brexit.

“I have been seeking to engage with Japanese businesses, particularly in the financial services sector, about the challenges and opportunities of Brexit”, he said.

“They are very sophisticated operators, well versed in what is happening in the UK market, and they don’t need me to tell them what is going on. But they did have some questions and I think they appreciated the opportunity to put across their particular point of view.

“I hope I have been able to reassure them today that we understand their concerns and that we will be prioritising addressing those concerns in the negotiations with the EU”, he added.

The key concern that representatives of the financial services sector raised revolved around access to the EU once the UK has withdrawn from the bloc.

“They are also concerned about access to market infrastructure, such as clearing arrangements across a range of currencies, including the euro, and they are seeking reassurances about access to European labour markets to staff their operations in London”, Hammond said.

The chancellor reassured Japanese stakeholders that London is already working hard to make sure the UK gets the very best deal from Europe.

“We have been clear that we will seek the maximum possible access to European markets on a reciprocal basis for our firms, both in terms of goods and services”, Hammond pointed out. “Clearly Britain is a net exporter of services to the European Union, particularly in the financial services sector, but overall we are a significant net importer of goods and services when [they are] taken together.

“Nonetheless, despite that imbalance against us, we approach these discussions on the principle that we would like the most open access to each other’s markets as possible.

“On access to labour, I have said before and I repeated again this morning that we will introduce a migration control regime between the UK and the European Union”, he said. “That is not the same as saying we will cut off immigration from the European Union and I can’t conceive of any circumstances in which we would not allow highly skilled, well-paid people with employment to come to the UK to work in these international businesses that are a part of the UK”.

Firms that require full access to Europe’s markets from the UK can continue to operate for the time being as they do now, Hammond pointed out. In a worst-case scenario, in which access is in some way restricted, they will need to “restructure the way their operations address the European markets, and that is the same for Japanese banks as it is for US banks, Chinese banks and others”.

Looking at a broader swathe of Japanese businesses with operations in the UK, Hammond said: “I can repeat that commitment that our clear intention is to maintain the UK’s competitiveness. We regard the UK as a highly productive location for international investment and we are determined to ensure it remains that way”.

He also played down concerns that Europe appears to have taken an extremely hard line against the UK, even before formal negotiations commence.