In April, Prime Minister Shinzo Abe made history by being the first Japanese prime minister to visit Slovakia. He was taking part in a summit with leaders from the Visegrád Group, which comprises the Czech Republic, Slovakia, Hungary and Poland. According to a 26 April story in the Nikkei Asian Review, Abe met with Slovakian Prime Minister Peter Pellegrini and other members of the Visegrád Group. However, Hungarian Prime Minister Viktor Orbán did not attend the meeting—he was at the Belt and Road Forum for International Cooperation in Beijing.

Abe’s presence and Orbán’s absence point to two dynamics in Central and Eastern Europe (CEE). The first is China’s considerable influence in the region. In 2016 and 2017, Beijing announced some $9.4 billion in deals for 16 CEE nations. These were connected to China’s ambitious Belt and Road Initiative, which aims to develop infrastructure and investment projects on a global scale.

The second dynamic is Japan’s response to the inroads China is making in the region. While Japan cannot rival the financial might of China, it does have the potential to make its influence felt—both through international trade pacts such as the Japan–­EU Economic Partnership Agreement (EPA), which went into effect in February, and by Japanese firms investing in the region.

CEE nations offer very promising business oppor­tu­nities for firms in a wide variety of indus­tries, from food and beverages to informa­tion tech­nology. The combination of low costs, a highly skilled work­force and proximity to wealthier nations in the European Union make the CEE an appealing location for firms looking to open new European offices, planning to expand into new markets and eyeing mergers or acquisitions.

While firms in Western Europe have long recog­nised that the CEE offers ideal conditions for doing business, those in Japan have been a bit slower to invest in the region. But they are rapidly making up for lost time. Currently, there are about 1,000 Japanese firms in the CEE—operating in sectors such as auto­motive, manufacturing, business services and energy—and they employ more than 50,000 people. Japan is the third-largest foreign investor in the CEE. Poland is the most popular location for invest­­ment, while countries such as Hungary, the Czech Republic and Romania are also receiving a great deal of attention from Japanese firms.

Against this economic and political backdrop, the first-annual Japan–CEE Investment Summit & Awards were held on 25 April at the Palace Hotel Tokyo.

Thom Barnhardt, founder of CEE Business Media and organiser of the event, has been running summit and awards events recognising US invest­ment in Central Europe for the past eight years. He decided to launch the Japan edition of the event in response to two important developments:

However, given that a move to Western Europe can be expensive, CEE nations have become competitive options. Barnhardt claimed that many Japanese firms that have been headquartered in Western Europe are moving their operations to CEE nations.

The summit portion of the event, which took place during the day, included:

The summit drew a diverse group of attendees, which included Japanese executives responsible for investment decisions in the region, executives from CEE businesses and ambassadors from several CEE nations. 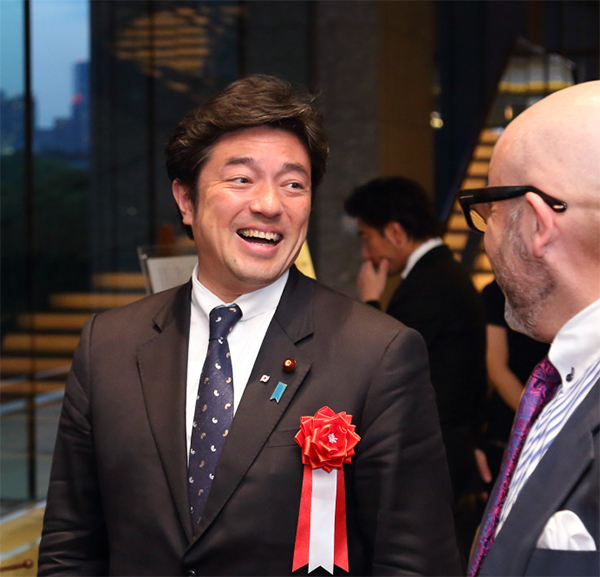 Following the summit, the evening awards portion began with a networking reception where wines from Romania, which were supplied by Euro Asia Trading, were served.

During the reception, Yasuhide Nakayama, former state minister of foreign affairs and member of the House of Representatives, gave a short speech before the toast. He expressed his hope that Japanese investors would not focus solely on China and South-East Asia, but also on the CEE region.

Taking the nation of Croatia, with its strength in engineering and aviation, as an example, he lauded the CEE’s reputation for technical prowess. And addressing the long-standing ties between Japan and the CEE, Nakayama said, “We are very geopolitically far away, but we have a long history [together] and we are proud of that history”.

The event then moved to a multi-course dinner, which was complemented by more Romanian wines as well as sparkling sake provided by Hakkaisan. Midway through the dinner, the awards were announced. The masters of ceremony for this portion of the event were Barnhardt and GR Japan’s Mina Takahashi.

Some 49 Japanese firms were shortlisted in nine categories, and the group was quite impressive in its own right: they account for more than $15 billion in foreign direct investment into CEE nations. In total, 24 awards were given, chosen by a 19-member VIP panel.

The evening was a lively affair, and attendees stayed for some time after the last awards were announced to mingle and chat. Contacted after the event, Barnhardt said that he was very happy with both the turnout and the support for the inaugural event. “We were very pleased with year one! More than 120 top executives attended, which was a bit more than we expected. We were particularly honoured to have the support of [the Japan External Trade Organization], and commercial counsellors from across the CEE,” he told ACUMEN. “We were also glad to see the enthusiasm from Japanese investors already present in the CEE. They deserve these awards for their substantial investments in the region!”

Although ties have already been developed between Japan and the CEE, Barnhardt believes that events such as his can deepen the connections by educating both CEE and Japanese firms.

He has specific plans to boost awareness before next year’s event. “CEE firms largely are unaware of the opportunities in Japan, and especially mid-market Japanese firms are not yet present in the CEE. In 2020, we will have three or four Japanese cities supporting the event, by promoting this to their mid-sized and smaller firms”. Two of the first cities that Barnhardt has in mind are Osaka and Nagoya.

In addition to the presence of cities other than Tokyo at the event next year, Barnhardt is hoping that—given the number of UK firms that have invested in the CEE region—there will be a showing of representatives from the UK at the second Japan–CEE Summit & Awards, which will be held on 23 April, 2020.