Look at any region of the UK and you will find Japanese firms’ headquarters and manufacturing facilities, mergers and acquisitions, R&D projects carried out jointly with British firms and many academic links. All these are contributing to unprecedented growth in both the British economy and employment figures.

According to UK Trade & Investment’s Inward Investment Report 2013/14, Japan is the UK’s key investment partner in Asia, having delivered 116 projects across the country in 2013–14 and created 3,040 new jobs. Moreover, half the cars manufactured in the UK in 2014 are by Japanese makers. 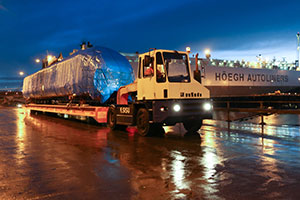 Hitachi, Ltd. recently set up their global headquarters of Hitachi Rail in London, and production at their factory in Newton Aycliffe, County Durham—the firm’s European rail manufacturing base—is due to start in 2016. It will create more than 700 jobs and thousands more in the wider supply chain.

In the field of M&A, in 2014, Japanese global firm Suntory Beverage & Food formed Lucozade Ribena Suntory when it acquired two popular British brands. Advertising giant Dentsu Inc. continues its buying spree in the UK after having acquired, in 2013, Aegis Group PLC, a leading provider of media-buying and market research, in one of the industry’s biggest acquisitions ever.

Snack manufacturer Calbee, Inc. recently made its first European investment in Flintshire, Wales, and has just unveiled their first product to be manufactured at the factory.

Some of this activity may have been prompted by Prime Minister Shinzo Abe’s growth strategy and an economic need for Japanese firms to globalise, moving out of a relatively uncompetitive domestic market.

However, there is no doubt that the strategic positioning of the UK, its openness to inward investment, the strength of its workforce and leading expertise were also key considerations when making these decisions.

The benefits of this inward investment are not solely economic; there are also social, cultural and educational ones. Living in the East Midlands myself and working with Japanese firms across the country, I have seen links develop at a grass roots level that have had regenerative effects on local communities.

One area of activity is investment in education and training. Hitachi Rail Europe and Gestamp Tallent Ltd., in partnership with the University of Sunderland, are sponsors of University Technical College South Durham, due to open in 2016. This college is part of a government initiative to support young people developing their skills in manufacturing and engineering and so fill the skills gap in this area.

Equally committed to the skill development of its Newton Aycliffe-based workforce, in January the firm transported a part-assembled train carriage from Kobe, Hyogo Prefecture, to the Port of Tyne in the North East of England. This facility will be used as a training unit, allowing apprentices, technicians and engineers to gain in-depth knowledge and expertise about the building of trains.

Toyota Motor Manufacturing (UK) Ltd. is also at the forefront of developing young people’s skills and career prospects. The firm runs projects in science, technology, engineering and mathematics in schools around their manufacturing facilities in Derbyshire and Flintshire, as well as an Apprentice Development Centre at its Burnaston plant in Derbyshire. This centre works in partnership with a local college and extends apprenticeships to a wide range of businesses.

Rob Gorton, corporate planning manager at Toyota UK, spoke at a “Local Growth, Global Links” seminar in London in March. Co-organised by the Japan Local Government Centre and the UK’s Society for Local Authority Chief Executives, the event explored the benefits of working with global businesses in the UK and building links with regions abroad.

Gorton said Toyota’s approach to working with the community is based on the two pillars of investment in the local environment and engagement with stakeholders. The firm’s commitment to Derbyshire—including an investment of £2bn and a workforce of 3,000—began in 1992.

Meanwhile, Fujitsu Ltd. recently launched its Education Ambassador Programme, which partners with schools, colleges and universities across the UK to enable students and educators to improve their digital skills. It has been named in The City & Guilds Top 100 Apprenticeship Employers.

The cultural links that have developed from Japanese investment into the UK run deep in communities, especially where local councils have nurtured the relationships, in some cases by developing a twinning arrangement. Derbyshire’s twinning with Toyota City, in Aichi Prefecture, has resulted in trade and cultural delegations, as well as business and school exchanges, while Japanese language classes have been introduced at some local Derbyshire schools.

Gateshead in Tyne and Wear and Komatsu City in Ishikawa Prefecture, run successful youth exchange programmes and other joint projects involving the arts, music and education.

In Flintshire, Toyota’s presence has resulted in the local council supporting annual cultural exchanges since the 1990s.

Ian Budd, chief officer of Flintshire Council, recognises the importance of these ties, which may well have played an important part in attracting Calbee to the area. In an article entitled “Flintshire’s Business & Cultural Links with Japan”, he says: “We know that we are far better and understanding partners when we promote cultural exchange and intellectual cooperation between our peoples”.