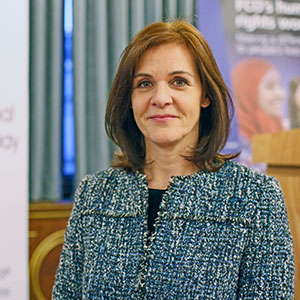 When it comes to the issue of gender equality, government policy plays a vital role in shaping debate, shifting attitudes and ensuring that discriminatory practices are reduced. But the ways in which governments are engaging with the issue can go much further, and increasingly it is coming to inform foreign policy for some countries.

On 28 February, Joanna Roper was appointed by Foreign Secretary Boris Johnson to be the Foreign & Commonwealth Office’s (FCO) special envoy for gender equality, and she officially took up her post in April. Roper spoke to BCCJ ACUMEN about her position, her time in Japan—including as part of the Japan Exchange and Teaching (JET) Programme—and the efforts by the UK government regarding gender equality issues.

How does the government ensure that gender equality is a part of policy?
The FCO leads the way in initiatives to prevent sexual violence. The Preventing Sexual Violence Initiative that William Hague and Angelina Jolie launched in 2012—with a conference in 2014—put sexual violence and conflict much higher on the world’s agenda.

In particular we are looking at the associated stigma and how it affects women—and children born of sexual violence. We want to take that to the United Nations later this year.

Our Ministry of Defence works on the women, peace and security agenda, training many thousands of not only our own, but overseas forces. They are trained in how to recognise the role of women in conflict resolution, but also how conflict could affect women and girls.

Then there’s Justine Greening, secretary of state for education, who sits on the High-Level Panel on Women’s Economic Empowerment, a UN panel, set up by Ban Ki-moon, now former UN secretary-general.

As the first special envoy for gender equality, how do you see the role and its scope?
The role looks to ensure that gender equality is woven through the UK’s foreign policy and programme work. I want to hear from our network of posts about how I can support them, the work that they are already doing, and where our partnerships and collaborations can lie. It’s also about making that step-change internationally and demonstrating UK leadership and commitment in this very important field.

My role will focus on three areas. First, we want to support other government departments and look at how we can work on the education agenda. This means supporting the work being done to help girls receive education and stay in school. The Department for International Development has a number of very good programmes that help girls receive their education. While not a panacea, it’s certainly the cornerstone of our gender policy.

We know that girls who complete their education, marry later, have fewer children, live longer, are healthier, and have more access to economic opportunity, which benefits their families, communities and society.

Second involves women’s participation. We’ll look at access to economic opportunity and how we can support women in different parts of the world. Enabling women to enter the workforce, supporting efforts to provide microfinance for entrepreneurs and seeing more women at senior levels in companies and business is an important element of our work.

The economic argument for this is really powerful. A report done by McKinsey back in September 2015 said that, if women took their equal role in the economy, anything between $12 and $28tn would be added to the global economy.

The second area also covers women’s political participation and their involvement in conflict resolution and mediation, as we know that when women participate in negotiations, the results are stronger and more sustainable.

Third is a broad portfolio of work, which I am calling women in fragile environments. So that could be violence against women and girls, women in conflict situations, forced marriage and female genital mutilation.

How do you go about having a conversation with countries when it comes to gender equality?
A key skill and part of diplomacy is about understanding how you can start a dialogue and try and find where you can agree.
Japanese society is changing as much as British society, and it’s a journey for everyone, but we can all learn from each other and support each other. Part of my role is to exchange best practices.

But we want to work in a way that is constructive and works for other countries as well. This isn’t about imposing one way of working; it’s about understanding and how we can work together on a bilateral basis. Key to diplomacy is understanding the environment in which you are operating, and adjusting and adapting to that.

How do you feel your time in Japan shaped your career?
I used to work in Japan as head of press and public affairs at the British Embassy Tokyo, but I also taught English in the 1990s as a JET participant in Gifu Prefecture, and my master’s degree was in Japanese studies.

We supported the 2005 Aichi Expo and worked very closely with the British Chamber of Commerce in Japan (BCCJ), the British Council, Visit Britain and our then-colleagues at UK Trade & Investment, and that was really good fun. It was about the time when the announcement was made that London got the Olympics, which was really exciting. So its great to be back here at a time when Tokyo itself is preparing for its own Olympics and Paralympics—for the second time. 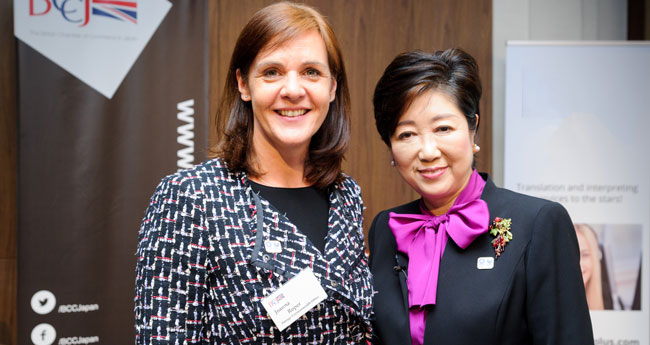 Roper with Tokyo Governor Yuriko Koike at a BCCJ event on 6 April.

What do you believe are the most pressing gender equality issues in Japan?
[At the BCCJ’s event in April with Tokyo Governor Yuriko Koike] we talked about having that very powerful economic argument, and having better economic performance and prosperity by getting women into the workplace—making best use of their skills, but also creating an environment that enables them to stay there.

The work Prime Minister Shinzo Abe is doing in expanding childcare is key. Encouraging the public and private sector to lead by example, men to champion and support and sponsor women through different stages of their careers, and gaining support from the Keidanren is all contributing to this change.

What are some of the issues you see with gender equality in the UK?
From April this year, organisations of over 250 people are being asked to publish the gender pay differential, and what actions they are taking to address that.

There is a big push to get girls and young women into science, technology, engineering and maths careers, because we want to see women represented in all sectors. 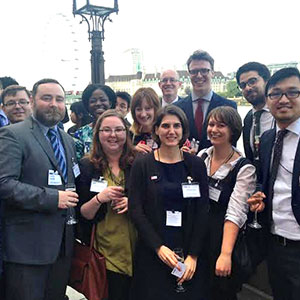 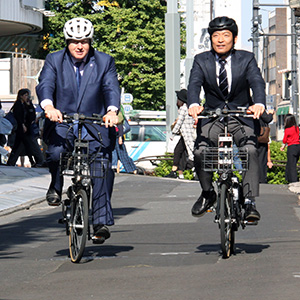