For some, travelling for business is a perk. For others, it is a chore. Business-class privileges can make all the difference in this perception—especially for people who travel often.

As Japan pursues more foreign direct invest­ment and a more prominent role as a global business hub, the number of travellers coming and going from its shores has steadily increased. Demand for luxury air travel is high, and events such as the Tokyo 2020 Olympic and Paralympic Games and the Rugby World Cup 2019 will only put more pressure on the nation’s airports.

As a result, many airlines have added more flights and new routes in and out of Japan. ACUMEN spoke with three carriers about their offerings to find out how they are easing the burden on business travellers.

As one of the UK’s most famous airlines, British Airways (BA) provides one of Europe’s largest long-haul fleets and most far-reaching global networks. The airline operates two daily flights from Tokyo—one each from the centrally located Haneda Inter­na­tional Airport and Narita International Airport in Chiba Prefecture—to Heathrow Airport, providing its custo­mers with greater choice and flexibility.

Those options grew even larger this month with the addition of a service to Western Japan.

“Our newest route from Japan is the Kansai-to-London service, which commenced operations on 1 April and flies four times a week between London and Osaka,” said Moran Birger, BA regional commercial manager for Japan and Korea.

Another European airline that has been provid­­ing flights to Japan for many years is Finnair. The flag carrier of Finland first connected Helsinki and Tokyo in 1983 and added Osaka to its network in 1995, Nagoya in 2006, and Fukuoka in 2016. There are plans to add Sapporo to that list in Decem­ber when Finnair launches a new direct route between Helsinki Airport and New Chitose Airport.

“The geographical location of Helsinki makes air travel very smooth. Most European cities don’t have direct flights to Japan, so a stop in Helsinki is usually the fastest route,” said Hiroaki Nagahara, general manager for Finnair Japan. “British Airways, Japan Airlines and Iberia are in joint business with Finnair, with BA putting their code on most of the Finnair flights between Japan and Helsinki, and Helsinki and London”.

Middle East carriers are also renowned for luxury, and Abu Dhabi-based Etihad Airways has flown two routes to Japan from the United Arab Emirates (UAE) since 2010. “These routes were introduced to cater for local demand among those travelling between Abu Dhabi and Japan, and to pro­vide connectivity to our global network via our Abu Dhabi hub,” explained Etihad’s General Manager for Japan, Norio Inaba. “The Tokyo and Nagoya markets are served daily on next-generation Boeing 787 aircraft”.

With a 22-inch wide reclining lounge chair, people can enjoy a relaxing and roomy flight with electro­nic seat controls and in-seat massagers. The 18-inch TV monitor and noise-cancelling headsets deliver high-quality in-flight entertainment. In addition, anytime dining is available on long-haul flights and there is a food and beverage manager who can make recommendations from the menu.

Finnair’s business class also offers a variety of advantages. Full-flat business-class seats can fully recline for a restful flight, and travellers have access to a complimentary lounge. They also have priority for checking in, going through security control and boarding, to ensure the process is smooth and timely.

BA has been flying between Japan and the UK for decades. “Narita has played an integral part in BA’s 71 years of serving the market and, to comple­ment that service, flights were launched from Haneda in 2011,” explained Birger. “British Airways has native Japanese-speaking crew mem­bers, local catering options and Japanese-language entertain­ment on all flights between Japan and London. It is our goal to offer the best of British service, design and quality, alongside local touches bespoke for Japanese customers”.

Perks for any passenger travelling with BA are plentiful. Terminal 5 at Heathrow Airport is the airline’s home and is for the exclusive use of customers of BA and its sister airline, Iberia. “The award-winning terminal offers world-class dining, shopping and luxurious lounges, as well as seamless onward connections to BA’s vast route network across the UK and Europe,” Birger said.

For the business traveller, BA’s new luxurious cabin, The Club Suite, was recently unveiled and will launch on the airline’s first A350 aircraft in July. The new seats offer direct aisle access, a suite door and a flat-bed chair. They feature 40% more storage and include a vanity unit and mirror, Wi-Fi, an 18.5-inch inflight entertainment screen and PC/USB power.

“We’ve worked hard to ensure every aspect of the Club World experience­—from the lounges we’ve refreshed to the new gour­met menus from [Austrian catering firm] Do&Co on flights from Heathrow, and the luxurious bedding we’ve intro­duced from The White Company—exudes the very British style and quality customers expect from us,” Birger added.

The three-cabin A350 aircraft will feature the latest 56-seat World Traveller Plus premium economy cabin, with updated furnishings that include a plush pillow and warm quilt, new amenity kits and an improved dining experience.

Small goodies can perk up a flight, and refreshing lotions and creams, toothbrushes and earplugs are standard for many airlines. BA provides luxurious amenity kits to Club World passengers. Elegantly designed bags from The White Company contain products from the retailer’s Restore & Relax Spa Collection. A soft jersey eye-mask, lip balm, moisturi­ser and a relaxing pulse point oil are just a few of the deluxe items that customers can enjoy.

Last year, Etihad launched a major new partner­ship with the Italian fragrance brand Acqua di Parma to upgrade the quality of their amenity bags. The UAE national airline has introduced a range of exclusive amenity bags and toiletries for its first- and business-class passengers. The business-class unisex wallet bag contains a sample of Colonia, the brand’s staple unisex cologne, and a hand cream which will also be dispensed in the business-class bathrooms.

Finnair, meanwhile, has collaborated with celebrated Finnish design house Marimekko since 2012, and, in March, released an improved amenity bag for the business-class cabin. The bag includes alumi­nium tubes of almond-coconut lip cream and a chamomile-lavender facial hydrator from L:A Bruket, a Swedish organic skincare brand.

The majority of the cosmetic comforts included in the new amenity bags—as well as other perks, such as slippers made from recycled plastic bottles and a tooth­brush made from bio-plastic corn-starch—have been made with sustaina­bi­lity in mind. These changes should allow Finnair to re­duce its plastic waste by 4,500kg per year.

As frequent flyers will know, the quality of experi­ence varies from airline to airline. For people who travel around the world for work, the things mentioned here are key to ensuring a pleasant and relaxing flight ahead of a busy schedule. New routes and more direct flights will increase efficiency and reduce travel stress, which will lead to better business results—something these airlines are committed to helping you achieve. 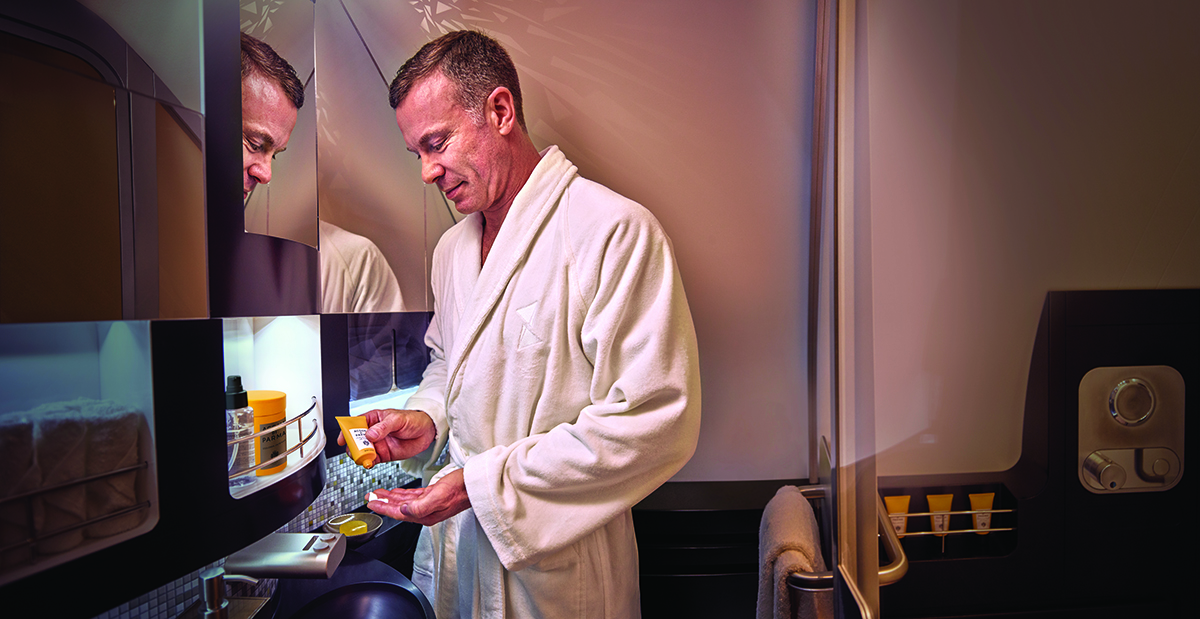