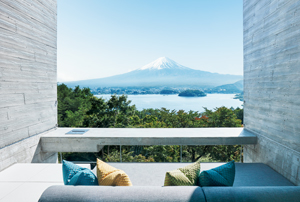 If you go down to the woods today, you’re sure of a big surprise—because a nation that loves camping nearly as much as it loves luxury is embracing glamping.

The modern concept of luxurious outdoor holidays, and the term glamping, first appeared in the UK in 2005, and at least a dozen sites that are an amalgamation of glamour and camping have popped up across Japan over the past couple of years.

British glampers can now stay in yurts in Snowdonia, wigwams in Yorkshire or treehouses in the Cotswolds. And Japanese campers want similar experiences.

“Glamping is the best mixture of two worlds”, said Akira Segawa, president and CEO of Fujita Kanko Inc., which recently opened its first site with a panoramic view of Mount Fuji.

“You get fully pampered with modern comforts while enjoying outdoor activities surrounded by dynamic nature”, he told BCCJ ACUMEN. “It can be active or relaxing. You can take your parents and kids glamping and three generations can enjoy it effortlessly”.

Glamping is an ideal new vacation option for several generations of families. Segawa believes that rising numbers of foreign visitors are seeking “more authentic and unique experiences” and are looking to get away from traditional tourist hotspots. Glamping fills the bill.

Here’s a roundup of some of the best glamping facilities from around Japan. 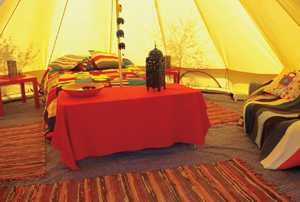 Camping With Soul
Started out in the UK in 2007, when founder Tobyn Cleeves and his new wife needed somewhere to stay that would be unforgettable and unique for their wedding night. Several guests subsequently said they also wanted to spend a night or two in Bell Tents that used to serve as accommodation for the British military.

The business took off after being featured in The Sunday Times and grew to include bespoke vacations and accessories.

In March 2018, Camping With Soul Japan became an Entrepreneur Member of the BCCJ. Its tents are becoming a fixture at events across the country, including the Hanno Bierfest and the Tokyo Garden Terrace Kioicho. www.cwsjapan.co.jp

The venue combines the best of two worlds: a large open-air space with plenty of outdoor activities, along with all the sophisticated comforts that a traveller would expect of a high-end hotel. 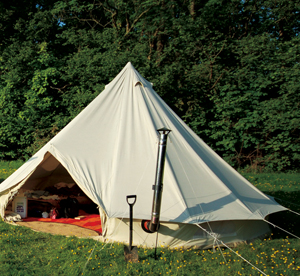 Bell Tents have been used by the British military. • PHOTO: CAMPING WITH SOUL

Spread over more than 16,000m2, the site has 20 thoughtfully designed cabins, ranging in size from 54m2 to 153m2. Each unit is air-conditioned, comfortably fitted out and equipped with toilet, shower, hammock, outdoor jet bath as well as a deck with a grill and a fireplace.

The property delivers gourmet meals to each cabin or can provide the raw materials for a meal so that guests may cook for themselves.

The site has a play area for children, a dog run, an event space and a shop, while there are plenty of opportunities for enjoying the surrounding wide open space, ranging from hiking to fishing, horse riding and trying your hand at arts and crafts.

Or you could just relax on the deck in front of a blazing fire, watching the sun bathe Mt Fuji in its glow as it sets. www.fu-ji-no.jp/kirameki/en/index.html

With views of Mt Yotei and the Niseko mountain range, the site has tents that are luxuriously fitted out. The beds are large, and each tent has a sofa, oil stove and an outside area for barbecues. And while the bathing facilities might be a little more rudimentary than elsewhere, the owners recommend that guests take the opportunity to enjoy the neighbouring onsen. www.bongoniseko.com

Hoshinoya Fuji
Mt Fuji is, inevitably, a big draw for outdoor enthusiasts, so it was no surprise when Hoshino Resorts Inc. identified the area as the place for the nation’s first five-star glamping experience.

Hoshinoya Fuji is set among red pine trees overlooking Lake Kawaguchi and with Mt Fuji rising majestically beyond. New arrivals are issued with a backpack containing a pair of binoculars for seeking out the local wildlife, a head torch, a map of the hotel’s expansive grounds, a steel bottle for hot drinks, insect repellent, and even an inflatable cushion for delicate behinds.

The Cloud Terrace is at the top of the hill and has a campfire where guests can toast marshmallows or sip coffee. Decks at different levels have beanbags and loungers. One section has a canvas cover, with a classic black-and-white film playing on the roof. 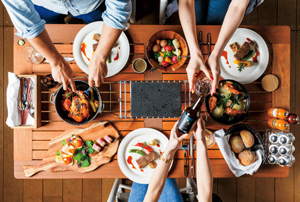 Food and drink are a key part of the glamping experience. • PHOTO: FUJITA KANKO

The accommodation may be described as “cabins”, but they are a long way from rudimentary log shacks. Set into the hillside below the restaurant, each of the 40 luxurious units has an en-suite bathroom with a large window and a deck fitted with a lounging sofa. The bedroom has a vast floor-to-ceiling window overlooking the lake and Mt Fuji.

Guests are able to make their own pizzas in the forest, can chop their own wood or take an early morning canoe trip on the lake. The hotel can also arrange horse riding on private trails, has classes on how to smoke food with chips from old whisky barrels, and can take guests searching for flora and fauna with a guide. Keep an eye out for deer, hawks and flying squirrels. https://hoshinoya.com/fuji/en

Grax Premium Camp Resort
In the mountains to the west of Kyoto, the Grax Premium Camp Resort has a selection of cabins, bungalows, tipis, trailer houses and tents set on decks with all the mod-cons (that do not require electricity). You can relax in a hammock on the deck or get the barbecue going for dinner.

Guests are able to take advantage of the nearby onsen, as well as take part in a number of activities that include golf, fishing on the Toden Hummingbird Lake and hiking on mountain trails. www.grax.jp 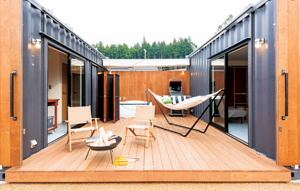 Nordisk Village Goto Islands
The very latest addition to Japan’s glamping scene will be Nordisk Village Goto Islands, on remote islands off Nagasaki Prefecture. A collaboration between Fujita Kanko and Nordisk, a Danish manufacturer of outdoor equipment, the venue will be Nordisk’s second high-end camping venue, following the opening of a site just outside Venice, Italy in 2017.

The Goto Islands are a 40-minute flight from Fukuoka or a ferry journey from Nagasaki. Famous for their beautiful, unspoiled beaches and abundant greenery, they are also an important part of Japan’s heritage, in the 16th century having been the location of one of its first Christian settlements.

Built on the site of a former elementary school, what was the wooden school building is now being renovated to serve as reception, café and restaurant, while the distinctive round Nordisk tents will be dotted around the grounds, each comfortably fitted out with two to four beds.

What is glamping?
While “Glamorous Camping” was believed to have been first googled in 2007—mostly in the UK and Ireland—the concept goes back at least to the Turkish Ottomans (14-20th century) who used extravagant mobile tent cities for their sultans. European colonials, meanwhile, enjoyed tented safaris in Africa and Asia with armies of staff to carry them from around the 1800s, while wealthy Americans added personal chefs to hunting trips in the early 1990s.

Glampers get:
• Direct access to the great outdoors
• Marshmallows and stories at the campfire
• The sound of rain on your tent or hut
• Nature’s peaceful soundtrack
• Time with family and friends
• Fresh air

But without:
• Carrying all that equipment
• Sleeping on the lumpy ground
• Shivering or sweating
• That half-deflated air mattress
• Sleeping bags, in general
• That not-so waterproof tent when it rains 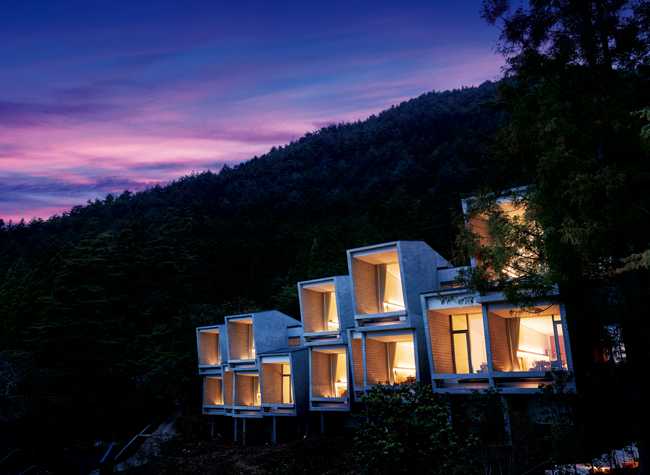