As the crow flies, it’s about 9,500km from England’s green and pleasant West Country to Tokyo’s concrete jungle. And driving on the rutted and uncharitable roads of central Asia, Siberia and Mongolia will feel an awful lot further for two teams of intrepid classic vehicle enthusiasts who aim to drive overland to attend matches in the Japan 2019 Rugby World Cup. 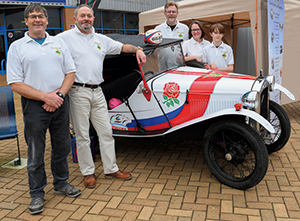 Chris Blakey (second left) and the Austin 7s will stop at locations across Russia to help support rugby for young people. • PHOTO: CELEBRATE THE SEVEN

Chris Blakey, a retired teacher from Melksham, Wiltshire, will be setting out at the head of a procession of seven Austin 7s—a marque that used to be made in Japan—while agricultural engineer Mark Farrell and his wife, Sue, will launch their assault on the Far East from Hemyock, Devon, aboard a repurposed—and repainted bright amber—Land Rover Pulse Ambulance that previously saw active service with the British Army.

Blakey, 67, said the first seed for what has evolved into “Celebrate the Seven—Austin Seven Trans-Siberian Challenge”, with its own website, was planted in his mind as he drove a godson to Paris for an England rugby match against France in his 1937 Austin 7 Special.

“So many nice people were interested in the car and we had such a great time—and with the next Rugby World Cup in such an exciting part of the world it seemed an opportunity too good to pass by”, he told BCCJ ACUMEN.

“For all those who have an interest in social and cultural relationships, the Baby Austin really is the key to opening so many doors and creating so many new friendships”, he said. “Its diminutive size and classic childlike profile bring out the smiles in both young and old.

“When on the same day a group of teenage schoolboys yell out ‘sick car mate’ and a lovely elderly lady stands and applauds, you do realise it brings a little joy to many lives”, he added.

Blakey’s car has undertaken a number of lengthy journeys around the UK and Europe, and was rebuilt by its previous owner to take part in the Peking to Paris rally in the early 1980s, although that event was cancelled. 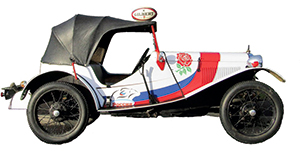 This 80-year-old Austin 7 will join the Twickenham to Tokyo convoy. • PHOTO: CELEBRATE THE SEVEN

13,000km in eight weeks
After setting his heart on the challenge, Blakey reached out to other Austin 7 owners through classic motoring events and club magazines until seven cars had been signed up to take part.

The drivers intend to start their odyssey at Twickenham, Middlesex, which hosted the last Rugby World Cup final, by accepting a rugby ball to deliver to Japan. At present, the planned route will follow the Trans-Siberian Highway through Russia from St Petersburg to Vladivostok, from where it will continue to Japan by sea.

The drivers will visit a number of rugby clubs during their journey across Russia, giving out sporting gifts designed to promote goodwill. Blakey estimates it will take eight weeks for the cars to complete the gruelling 13,000km adventure. 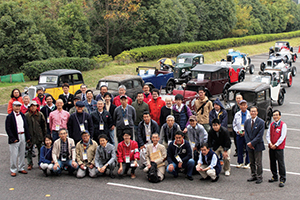 “I have always believed that travelling slowly offers the greatest opportunity to appreciate your surroundings, build real relationships and feel at one with the natural world”, he said. “This has been achieved throughout my life so far by walking, canoeing, climbing, sailing and cycling. Whilst the Austin 7 is a faster motorised way of journeying, it must also be one of the slowest—so I am sure we will make some lovely new friends”.

One of the people who anxiously will be awaiting the cars’ safe arrival in Japan will be Junichi Sugimoto, who owns an Austin 7 and is a member of the Japanese Austin 7 owners’ club.

“More than 100 Austin 7s were imported into Japan before World War II and most of their owners were doctors who used them on their daily rounds”, he said. “The cars were ideal for Japan’s narrow roads at that time.

“Unfortunately, many of the cars were lost during the war, although a few were later rescued by enthusiasts and rebuilt”, he said. Sugimoto said that, in Japan, a firm following is enjoyed by many British cars, such as the sporty MGs that were brought over by US officers after WWII, as well as the luxurious Rolls Royces, Bentleys, Jaguars, Land Rovers and Aston Martins for which Britain was famous. Indeed, an article in the May 2014 issue of BCCJ ACUMEN entitled “Memory Lane for Motors” features about 40 preserved or renovated British vintage classics and antiques of many sizes, ages and types at the inaugural Great British Rally in Tokyo.

But Sugimoto has serious reservations about Blakey’s ambitious endeavour.

“I think it is a crazy journey to attempt”, he said. “Previously, Austin 7s tackled the Andes, so it is a tough little car and I believe they will be able to reach Japan safely—but it will not be easy.

UK cars made in Japan
The first UK–Japan vehicle production joint venture is believed to have been in 1918, when Wolseley Motors Limited licensed three models to what is today’s Isuzu Motors Ltd. The deal included the Midland firm’s training, equipping and managing the factory in Japan.

After WWII, Datsun is said to have closely patterned its cars on the Austin Devon and Somerset models. 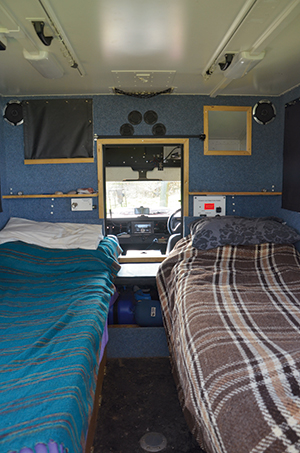 En-suite: View of inside the Land Rover

Amber, the amber-lance
Preparations for the journey to Japan—albeit along a different route—are also under way in East Devon, where Mark and Sue Farrell will mark their “partial retirement” on a trip they have been planning for 26 years.

Mark, 58, served as a volunteer during the 2015 Rugby World Cup in England, driving officials and VIPs to matches at the stadium of the Exeter Chiefs, where the Farrells are season ticket holders.

“I purchased our overland vehicle in 2016 from a military disposal company, concluding the deal on an online auction which was very tense”, said Mark. “It’s a Land Rover Pulse Ambulance—so we have christened her ‘Amber, the amber lance’ ”.

The vehicle has been appropriately repainted eye-catching amber, but choosing the colour was a tough task considering the environment ahead. Green was considered too military; white too reminiscent of the Red Cross; black too hot in the day, dark at night; while grey and silver are often associated with poor visibility, especially in fog or rain.

Mark has carried out major internal modifica­tions, including designing a cosy interior with two single beds that fold up to give rear seating for two passengers. Water and gas storage tanks have been fitted so they are largely self-sufficient en route, while side windows, a roof rack and storage for equipment and provisions have all been added. 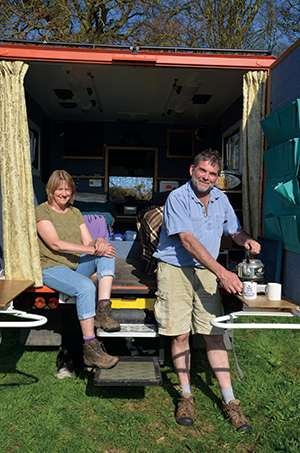 Sue and Mark Farrell enjoy a cup of tea with Amber.

Taking on the ’stans
“Sue and I have talked for years about doing an overland trip and, with us both nearing our retirement from full-time employment, it was Sue who suggested that we should drive to Japan for the next Rugby World Cup, while we were attending a game in 2015”. Amber’s ambitious route will take Mark and Sue, a doctor, through central Europe and into Turkey, before they cross into Turkmenistan, Uzbekistan and Kazakhstan. They will then go to Mongolia and Russia before catching the ferry from Vladivostok to northern Japan.

And they accept there may be a few potholes that need to be negotiated.

History of a motoring legend
Between 1923 and 1939, Sir Herbert Austin KBE’s firm made some 290,000 Austin 7 vehicles, of which there are believed to be about 8,000 remaining worldwide. They came in a variety of models that included saloons, tourers, sports cars and vans. The Austin 7 has been driven up mountains, through rivers, around racing circuits, into war zones and history books. It is still being used for adventures all over the world.

In 1929 Gladys de Havilland became the first woman to drive an Austin 7 around the world. This was followed by Hector MacQuarrie who, after battling with a crossing of Australia, eventually completed his own round-the-world journey despite the loss of his Austin 7 with the sinking of the liner SS Tahiti in 1930.

“I am consumed with thoughts about the trip every day and it can be a bit daunting—but as with any journey, the hardest part is thinking about it. Once you’re going, you’re going, and that’s a mile you don’t have to do again”.

“We have also both been inspired by a good friend, Jude Zebedee, who cycled on her own around the world with all her possessions on her bike—which keeps reminding us to keep it simple and not to take too much stuff”.

Magnus Hansson, CEO of Jaguar Land Rover Japan Ltd., said: “Land Rovers are rugged, dependable and a universally well known and respected brand—ideal for this kind of long-distance overland challenge. We applaud the Farrells for planning this great adventure and wish them a pleasant journey.” 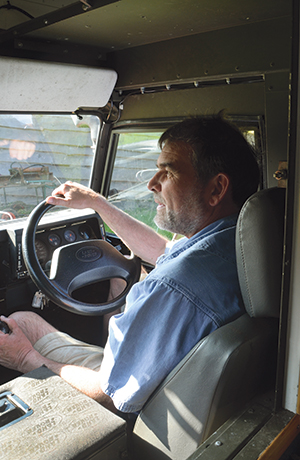 Mark Farrell at the wheel

The Farrells’ departure date has been set for 28 March, 2019, symbolically the day before Brexit, and they aim to arrive in Japan in the first week of September and stay in Tokyo with Mark’s brother, Simon Farrell, the publisher at Custom Media of BCCJ ACUMEN. The couple has already purchased tickets for the matches in Shizuoka Prefecture where Ireland, Scotland, Japan, South Africa, Georgia and Australia will play.

Border bureaucracy
Between the punishing road trip and the first rugby match, however, the drivers will face one final major hurdle: border bureaucracy. Bringing a foreign vintage or antique vehicle into Japan is not unheard of, but driving it straight off the ferry onto the road—as both teams hope to do—is unknown territory.

Goals: on and off the pitch
Celebrate the Seven aims to:

Despite having valid British certificates of roadworthiness for the vehicles, insurance, and international driving licences, the drivers and vehicles will be under tight scrutiny. Japan’s notoriously tough shaken system of testing vehicles every two years demands strict environmental, safety and other standards. Every vehicle will also need a police-issued parking certificate, which means the drivers will have to produce ownership papers, as well as parking permission, access maps and vehicle measurements—all in Japanese and notarised—in a procedure that could take days or weeks. Both teams are hoping authorities will waive requirements, fast track approval or issue a temporary permit so that they can get back on terra firma and not miss the kick-off.

And once the tournament is over and the exit requirements have been completed, the Austin 7s will be shipped back home while the Farrells might opt for somewhere in the Americas and make it a round-the-world trip.

Both routes start and end with ferries and take drivers overland via Helsinki or Calais to Vladivostok.