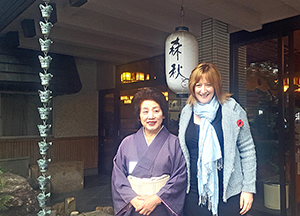 I am a lucky participant in the celebrations of the 30th anniversary of the Japan Exchange and Teaching (JET) Programme. Run by the Council of Local Authorities for International Relations (CLAIR), the JET Programme was set up to foster grass-roots exchange between Japan and other nations.

So far, some 62,000 participants—myself being one—from 65 countries have helped support cultural understanding.

In November 2015, as part of the build-up to the main celebrations in 2016, I was one of 15 participants of CLAIR’s Satogaeri (homecoming) Project, who returned to the areas in Japan in which we had lived and worked. The aim was to re-establish connections, forge ties for the future, and promote our Japanese hometowns in our current countries of residence.

My destination was Ota City in Gunma Prefecture, and it was my first visit since I had left in 1998.

Through my work with British businesses that are seeking to invest in Japan or which have been acquired by Japanese firms, I speak with lots of people about Japan. Many want to travel in the country independently and visit places aside from those on the main tourist routes.

Due to the area’s proximity to Tokyo and the varied nature of attractions, including well-known hot spring resorts, Gunma is an accessible and worthwhile day-trip from the capital.

Moreover, due to the upcoming Rugby World Cup 2019 and Tokyo 2020 Olympic and Paralympic Games, there is noticeably more interest in Japanese popular culture among the British population.

I therefore think there is a lot of potential to promote Gunma in the UK as a tourist destination, and I will make efforts to do so. 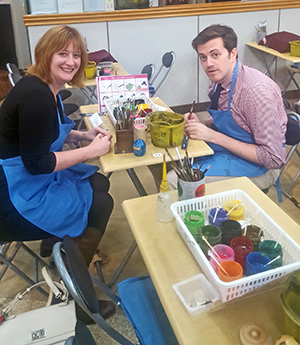 Local tourism
Accompanied by representatives from the tourism department of the Maebashi Prefectural Government and CLAIR, I visited Ikaho Hot Spring Resort, nestled in the mountains of the prefecture.


We stayed the night at a traditional inn where we sampled the hot spring waters. I had not visited since 1997, so this was a very nostalgic trip. Thankfully, I had not forgotten the etiquette of a Japanese hot spring, although I had forgotten how hot the water is.

The following day, we walked around Ikaho, admired the stunning display of autumn leaves at Kajika Bridge and tried the famous Mizusawa Udon, considered one of the three most delicious udon in the country.

Afterwards, we went to Usaboru Museum, where kokeshi (handmade wooden) dolls are manufactured, painted and exported worldwide. The shop hosts an impressive selection including designs modelled on Star Wars characters. I had a go at making my own mini doll but, judging by the result, I won’t be getting a job there anytime soon.

We then travelled across the prefecture to visit Tomioka Silk Mill, a UNESCO World Heritage Site and Japan’s oldest modern silk reeling factory. We were shown around by Damien Robuchon, a coordinator for international relations (CIR) for the JET Programme who has been seconded to promote the site.

The mill was founded by a Frenchman and played an important part in Japan’s opening up to the world on many levels, since silk was one of the country’s main exports in the middle of the 19th century.

The silk mill fused French and Japanese technology, machinery and architectural structures, having been imported from France. Stories abound of how the Japanese initially thought that the red wine drunk by the French workers was the blood of the local factory workers.

After this misunderstanding had been overcome, the mill became a major employer of Japanese women in an era when women didn’t normally work in factories, let alone in those owned by non-Japanese.

Our final destination was a visit to the Gunma prefectural offices in Maebashi City, where I was presented with locally made gifts and invited to join a dinner with assistant language teachers, CIRs and other staff. We were able to discuss my impressions of Gunma after an absence of 20 years, and swap business cards so we can stay in touch.

Back to school
I returned to the junior high school in which I had taught 20 years earlier. Reassuringly, everything looked and felt exactly the same as I remembered; the school lunch was very similar and the students still did their daily cleaning. The only difference was the TV screen and Internet connection currently in the classroom.

I had a chance to re-connect with the teachers with whom I had worked, as well as my former students, who are now in their thirties. Some of them are teaching at the school, while others have indulged their passion for English and lived abroad, or become translators.

Much of the reminiscing with my former colleagues centred on the trips we had taken with the students, as well as our visits to Singapore and local hot spring resorts in our spare time.

The Satogaeri Project really made me appreciate the grass-roots experience I had had in Japan, thanks to the JET Programme. It was through this experience that I attained an understanding of Japan, which I now use in my UK business.

I would like to extend my gratitude to CLAIR for organising the project, and to the hospitable people of Gunma who helped me cement my on-going connection with the prefecture. I will certainly be going back again soon.