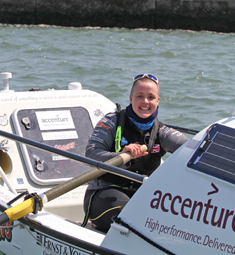 Utterly undeterred by Tropical Storm Mawar scuppering her initial attempt to be the first person to row solo across the North Pacific from Japan to Canada in May last year, Sarah Outen set out once again from Choshi Marina, Chiba Prefecture, shortly after 3:30pm on 27 April on the toughest leg of her journey by bicycle, kayak and rowing boat around the planet.

This leg of the British adventurer’s London2London: Via the World odyssey involves a 4,500nmi row across the largest ocean in the world that will mean she is at sea for 150–200 days aboard Happy Socks, her ocean-going rowing boat.

If successful, 27-year-old Outen will become only the third person to have rowed west to east across the Pacific—both previous successes have made landfall in the US. Numerous attempts to make the crossing have failed.

In the first 24 hours after she put to sea, Outen had managed to cover 30 miles; picking up the Kuroshio Current that should help propel her towards her destination.

But she is very aware that the hardest part of the journey still lies ahead.

Originally from Oakham in Rutland, East Midlands, Outen’s first attempt to cross the Pacific was brought to an abrupt end when her previous boat, Gulliver, was hit by Mawar. The storm generated 15-metre waves, while winds gusted at more than 80mph. Her boat had capsized 20 times.

Rescued by the Japan Coast Guard, Outen returned to the UK and spent the next nine months planning to continue her journey.

“The North Pacific has already proven itself to be the most gruelling part of the whole London2London expedition”, Outen said. “Physically and mentally, I know I will be exhausted most of the time: the distance, weather conditions and my complete isolation will make it hugely challenging.

“Even so, I am ready for it and keen to get out there once more”, she added. “There are so many beautiful things about being alone on the ocean—the wildlife is my favourite part”.

Outen, who graduated from the University of Oxford in 2007, started kayaking aged 12 and undertook her first major expedition in 2009 when she rowed her way into the Guinness World Records by becoming the first woman to row solo across the Indian Ocean. The journey was, in part, inspired by the death of her father seven years ago and raised funds for a charity that helps those suffering with rheumatoid arthritis.

Her aim now is to use the latest expedition to raise £100,000 for a number of charitable organisations, including CoppaFeel!, the Jubilee Sailing Trust, the Motor Neurone Disease Association and WaterAid.

“I am an ocean girl at heart”, she said before her departure. “I love being so close to the water and living to the rhythms of the wild. The energy [of the ocean] is magic and the dynamics are so exciting.

“There are no guarantees of success out there and it will take every ounce of physical and mental strength and a good dollop of luck to make it across safely”, she added. “But I believe I have the best possible chance: physically and mentally I am strong and determined to give [the expedition] my best shot”.