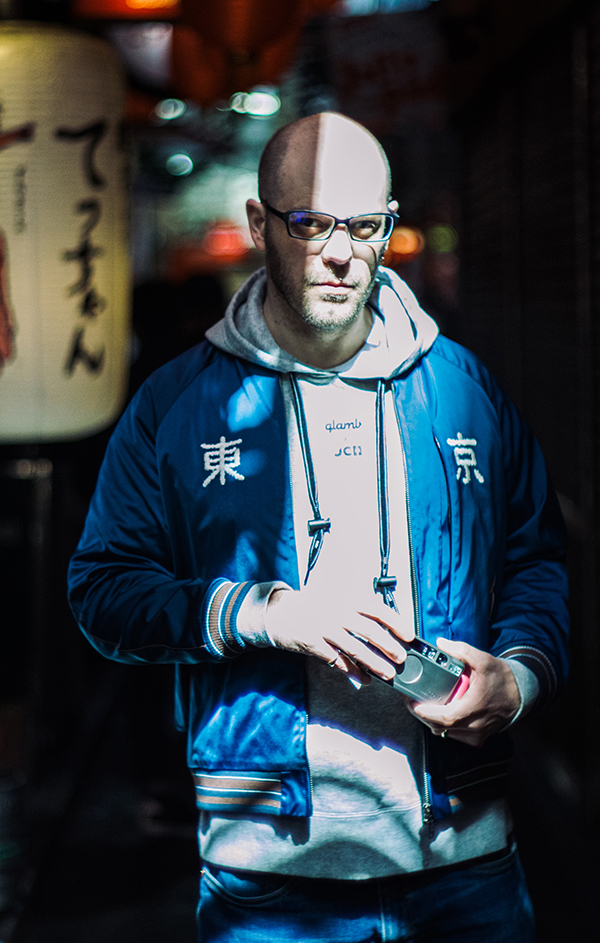 Oxford-born Tokyoite Bellamy Hunt has transformed his passion for photo­graphy into a business that helps enthusiasts and collectors uncover past treasures. Through Japan Camera Hunter (JCH), he provides a range of services, from sourcing to repair, and proves that going niche can lead to entrepreneurial success. ACUMEN spoke with Hunt to learn more.

What do you do exactly?

I am primarily a camera broker. I only deal with film cameras and classic lenses. I find rare and special items for my international clients from the stores and private collectors in Japan. As the business expanded and evolved, I started making my own products, including photo­­graphic film and accessories. As the JCH brand developed, I started collaborating with others to bring exclusive photography-related products to the market. Currently, we are working with the clothing brand glamb to make our own line of apparel.

How did it all begin?

After working for a couple of years at a Japanese firm, I found myself to be restricted in how I could progress. I understood that I would not be able to move any further in the organisation, so I decided to start my own business—with the blessing of the firm—sourcing cameras for professional suppliers in the West. After a short time, I realised this would not be enough, so I set up a website and started sourcing items for the general public. In the early years, I would spend days on end walking the streets to find items, but, over the years, I have developed relationships so I can work from my office.

Well yes, they did, for the digital compact camera market, at least. All the major manufacturers have been facing issues over the past few years, as consumer use has changed. The major manufac­turers were slow to see the shift and adapt, which has cost them dearly. In terms of retail, the digital camera market is flooded, and it is very difficult to find an advantage—especially against the larger outlets.

But the focus of my business is photography and film cameras, which have seen a resurgence in recent years. Some readers may not know this, but Kodak are still in business and Nikon still make a professional film camera. There is an active and healthy community of film photographers, which includes some very famous actors and directors who still use film. The recent Star Wars movies were shot, in part, on film.

What are the most expensive or interesting cameras you have handled?

I cannot disclose the exact amount of the most expensive camera, due to client confidentiality, but it was in the $100,000 range. Rare and collectible cameras have moved into the same zone as collect­ible timepieces. Two years ago, one of the earliest Leica cameras sold for $2.9mn at auction. One of my favourite cameras that I found was a Leica M2, most likely used by photojournalist Sean Flynn, who in 1970 was kidnapped while on assignment in Cambodia and never heard from again.

What is the holy grail for camera hunters?

I don’t really know what other people look for, but, for me, it is finding something that has not been seen for a very long time, or something that people didn’t know existed. I do have a couple of personal grail items, though I am reluctant to mention them as others will try to find them. But I would say that I would be made up if I could get my hands on [Swiss photographer and filmmaker] Robert Frank’s cameras.

Who are your best clients?

Client confidentiality prevents me from going into detail, but I have a small group of collectors who are extremely passionate about certain items and will always buy items if I find them. Some of them give me an open mandate to just get what they need, as I know their standards and requirements. But, really, the clients who buy from the web shop are the best and are the engine that keeps the business running.

Is Tokyo a camera hunter’s paradise?

It is in a manner of speaking. If you know what you are doing, and have the connections, then it is. But gone are the days of shelves heaving with gear and being able to walk into a store and find anything you need. Japanese sellers became more internet savvy, and overseas buyers found success in coming to Japan on buying trips. Nowadays, if you want to find the really special items, you have to know where to look—and the traders guard their sources jealously.

Is it difficult to buy film these days?

Not at all. I make my own—JCH StreetPan 400—and many major stores in Japan, such as Yodobashi Camera, still carry film, and there are thousands of outlets worldwide that still carry and process it. While not as ubiquitous as in the past, film is still readily available if you know where to look. The main barrier for people now is the cost, as the prices have risen in recent years.

What entrepreneurial skills have you developed?

I started this business with a strong idea of what I wanted to do, but with very little in the way of understanding how I could convey that idea. Through trial and error, I developed the business and it has grown to the point that JCH is now a team with full-time employees.

Very early on, I realised that I would have to offer a service that set itself apart from other photo­graphic businesses. Having the camera sourcing was already a specialism, but there had to be more generalised services as well.

Making the website into a resource for photo­graphers was also an important step, as it has helped to establish the brand as an important part of the film photography world. To bring eyes to the website, I started producing my own branded products and collaborating with other brands. I have found that utilising social media, particularly Instagram, has been instrumental in expanding the business.

By my nature, I am rather an introverted person, but I had to move out of my comfort zone to raise the business profile. I have engaged in public speaking events, webinars, YouTube videos, and media interviews. This has really helped with showing people what JCH does and has made the website a popular portal for film photography.

For the initial years, I worked very hard and rarely took a break. This had a negative effect on my health, and I have now had to make sure that I maintain a clear work–life balance. That could be one of the most important things I’ve learned.

Has Covid-19 affected your business?

It has had a huge impact, unfortunately. Stores have been closed, so finding items has been very difficult. But the biggest issue we have faced has been shipping. We used Japan Post EMS for all our shipping, and that service stopped in April. So, we were forced to find alternative options, which come at a higher cost for us. We have also faced supply chain delays for many of our products, with some being held up for several months.

We are quite fortunate in that we still have customers—as our business is entirely online—but it has not been easy. We have used this time to work on new aspects of the business and new products. We have branched into YouTube to promote the business. JCH is still going and we are addressing the issues to bring quality items to our customers, even if it takes a bit longer than usual.