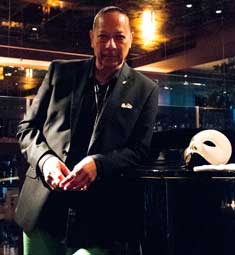 Peter Straker was a close friend of Freddie Mercury, who produced his first two albums.

Humorous, slapstick, melodramatic and great fun; these are perhaps not the first words that come to mind when audiences consider Phantom of the Opera.

“Ken [Hill] has a dreadful sense of humour. Audiences expect a horror story, but the show is nothing at all like that. Expectations are that it’s a reasonably serious piece of theatre, but straightaway it launches into the humour”, said Peter Straker, the actor playing the title role in next month’s run of Ken Hill’s Phantom of the Opera.

Fans of the musical are most likely familiar with Andrew Lloyd Webber’s 1986 rendition of the classic novel by Gaston Leroux.

Hill’s version, however, is billed as “The original Phantom”, an aspect widely promoted in the media that producers attribute to the success of its first runs in the UK and the US.

After the original show’s debut in 1976, late British playwright and director Ken Hill revived it in 1984 for the Newcastle Playhouse.

Enter Straker, the actor who has played the phantom more times than he can remember. Straker met Hill while appearing in another of his productions, Nightmare Rock. The playwright’s flair for the unconventional was ever present in that musical, which showcased a melange of Elvis Presley songs and a plot drawn from influences ranging from Sherlock Holmes to the 1828 Burke and Hare murders.

One evening when the actor and director met over drinks, Hill mentioned that he had rewritten the score for one of his musicals but was having trouble finding someone to play a certain role.

The part of the phantom wasn’t particularly large, he said, rather it involved “lurking acting”.

Straker immediately took interest. The beginning of a lengthy working relationship was “signed and settled over a drink”, Straker said, “as it often was in the good old days”.

After Newcastle, the show went on to London’s Theatre Royal Stratford East. Lloyd Webber, his then-wife Sarah Brightman and producer Cameron Mackintosh were in the audience one evening and reportedly approached Hill about a collaboration. In the end, Lloyd Webber went his own way.

To start, Hill followed the Leroux novel much more closely than Lloyd Webber.

He also insisted on creating a musical score to reflect what would have been heard at the opera house in the late 19th century, the time in which the story is set. Hill’s musical incorporates grand opera arias by Verdi, von Weber and Mozart.

“He [Hill] has taken the litany of grand and comic opera and put his own words and brand on it. It’s not sung through, like other musicals; rather, there is dialogue throughout”, Straker said.

An additional character can also be seen in this version: the camp opera singer.

Peter Straker has always been drawn to Hill’s slightly dark sense of humour, which is evidenced in the lyrics of one of the final songs, “What an Awful Way to Die”.

The seasoned actor, who this month released his latest album—Peter Straker’s Brel—admits the greatest challenge to playing the phantom, besides the suffocating mask he must wear, is singing opera. Nevertheless, he still thoroughly enjoys his part.

“Every night it’s a different role. Audience reactions make you play it in different ways. It’s a fantastic challenge”, he said.

The December performance is the show’s fifth run in Japan, the last having occurred nine years ago.

Straker said he has been pleasantly surprised at how the show’s humour has translated for Japanese audiences, which have responded to the production tremendously well. This may be because of the volume of physical comedy in the work, some of which borders on mime.

During Straker’s previous visits to Japan, he has attended kabuki performances and sumo matches, which he said he absolutely adores, as well as shows by the Takarazuka Revue.

“What I love about the Japanese style [of watching kabuki and sumo] is that people just come to the theatre and do their thing, get on with it. Families come and enjoy their tea and snacks.

Joan Littlewood of the Theatre Royal said, ‘People should be able to come into the theatre and do as they wish, because it’s a part of their way of life’. That’s what theatre, to me, is about.

“Sometimes I think theatre in the West is too precious. It’s something that’s meant to entertain you after all”, he said.

Straker admires the “live and let live” philosophy he has observed in Japan, and how Japanese are always quite complimentary on his visits.

Stetson Productions is bringing Ken Hill’s Phantom of the Opera to Tokyo on 19–29 December.