The Rugby World Cup (RWC) 2019 has brought the perfect opportunity to share the contemporary flavours of food and drink of Britain with Japan and fans from around the world.

From stadiums to restaurants to the UK in JAPAN 2019–20 campaign, the quadrennial faceoff among the world’s rugby powers has combined sport, culture, interaction and food into a grand marketing opportunity.

Well before the kick-off, industry leaders in the UK gathered to push forward the chance to boost culinary trade with Japan. In June, a delegation from the Welsh Government visited Tokyo on a five-day trip that was part of the Food and Drink Wales trade development scheme.

Welsh Government repre­senta­tive to Japan Robin Walker said, “This year, Japanese people will discover Wales through rugby, but the journey doesn’t end there”. The hope is that the matches running from 20 September to 2 November will spark interest in Welsh food and drink and kindle a flame of success that will grow for years to come.

Looking the other direction, STH Japan, the official hospitality provider for the RWC 2019, arranged premium experiences for UK fans travelling to Japan for the tournament. The British Chamber of Commerce in Japan (BCCJ) member firm, who is also the top sponsor of this year’s British Business Awards, offered six hospitality packages that included the best seats and sophisticated dining experiences across the 12 stadiums hosting matches.

Starting at ¥150,000 for the Sport C package, which included Category C seats at Yokohama Stadium and a support experience at nearby Yokohama Arena, the packages extended up to ¥455,000 for the 1823 Lounge, an exclusive in-venue hospitality offering, also in Yokohama. In between were Sport A, Gold, Diamond Dinner, and Platinum packages at stadiums across the country that offered various culinary experiences, speaker events, live entertainment and more.

When it comes to the food itself, establishments are taking their cues from the game.

BCCJ member firm Grand Hyatt Tokyo is well known for its flavourful and artistic creations, and the RWC stirred the creative mind of Patrick Shimada, chef de cuisine at The Oak Door steak­house. Drawing on colours seen on the pitch, the fourth-generation Japanese-American crafted a line-up of three hot dogs and one burger with a rugby theme.

The Brown Dog, which Shimada dubbed Rugby, is a pork hot dog covered in house-made chili con carne, diced red onions and melted cheddar cheese. The White Dog pays homage to the England team—pickled red cabbage on top contrasting with the white bun—and the host country is represented by the Red Dog, which incorporates wagyu steak, daikon and yuzu. Viewed as a whole, the Red Dog is layered in stripes reminiscent of the Brave Blossoms’ jerseys. The shape of all three conjure up the image of a rugby ball.

In another nod to one of the RWC’s strongest participants, Shimada’s Black Burger is dedicated to the New Zealand All Blacks and is served on a bun made with bamboo charcoal dough. 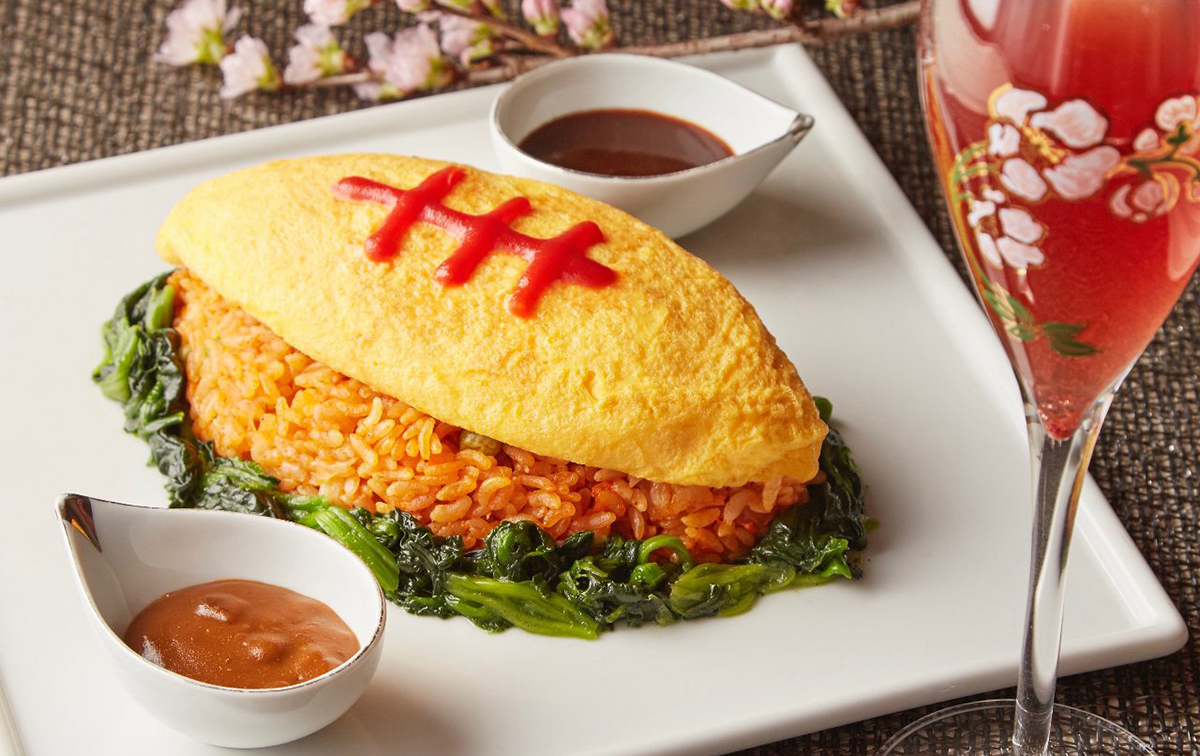 Hotel Continental in Fuchu added an eye-catching version of Omurice—the Japanese main­stay that combines fried rice and omelette—to the menu of its Cafe & Bar Colt. The dish, shaped like a rugby ball and served on a bed of greens that repre­sent the field, can be paired with a cherry blossom liqueur cocktail in honour of Japan’s Brave Blossoms national team.

Shinagawa Prince Hotel set up the Ichozaka Beer Garden Outdoor Terrace in the lead-up to the RWC and sold two special items—the Red Spicy Chicken Burger, inspired by Japan, and the Black & Black Burger, inspired by New Zealand. Oddly, the theme only ran through 14 September—a week before the kick-off—but it was an example of how excitement for the RWC has been building in the country all year.

While food is great, food plus action and camara­derie is better, and the Hilton Tokyo teamed up with Heineken—worldwide partner of the RWC 2019—to set up a rooftop oasis where rugby fans can gather to watch matches on multiple big screens. Hilton Tokyo is also home to St. George’s Bar, a classic English bar with a wide selection of whiskey, beer and wine.

ANA InterContinental Tokyo is using the RWC as a chance to offer perks to its IHG Rewards Club Members as well as Mastercard holders. Passionate fans from Japan and abroad who fall into these two categories get free entry into the Mastercard Hero Bar, alongside the fourth-floor Garden Pool, to enjoy locally inspired Japanese street food, watch matches and take part in rugby-inspired activities.

Official Rugby World Cup 2019 Fanzones in each of the 12 host cities have also provided exciting gathering spots and flavours from the UK as well as other competing nations. BCCJ member firm and RWC worldwide partner Jaguar Land Rover Limited has a presence at the Yurakucho Fanzone, where fans can enjoy fish and chips, lamb chops and more.

And UK food and drink was showcased at the Food is GREAT Gallery in three Rugby World Cup host cities: Sapporo (21–23 September, England vs Tonga); Kobe (28–30 September, Scotland vs Samoa); and Tokyo (13 and 14 October, although the England vs France match was cancelled due to Typhoon Hagibis). These galleries gave Japanese consumers a taste of Britain, with particular focus on craft gin, English sparkling wine, and British beef and lamb.