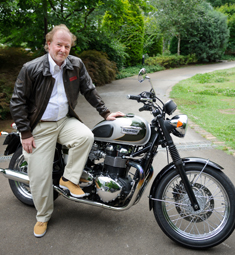 Business is brisk for a firm that produces some of the most iconic works of two-wheeled engineering on the road. Nevertheless, Triumph Japan President David Blume OBE does wish that young Japanese would produce a little more testosterone.

“The average Japanese customer is in his thirties or forties; and there just aren’t so many of them”, said Blume, who has been in Japan since 1983. “You just don’t see as many bikes on the roads as you used to”.

It’s a generational thing; the baby-boomers grew up with bikes as an aspirational target; they were accessible, affordable and a boy’s thing, and the motorbike then was important.

“But that has changed”, said 62-year-old Blume, who had managed Jaguar-Land Rover Japan before being appointed to his current position last November. “There is better public transport now, more choices of other vehicles, people live in cities and there is simply not as much testosterone around as there used to be”.

And that’s a pity, because young people just do not realise the experience that they are missing out on, he points out. 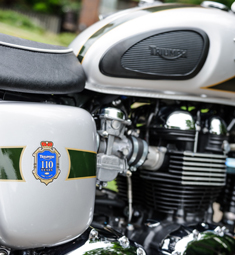 The other group of people who buy these bikes are baby-boomers, now in their fifties and sixties. With more time on their hands and money to indulge their passions, they are rediscovering their youth.

Blume has similarly reconnected to his own youthful aspirations.

“My grandfather was a motorcycle enthusiast and he died when I was 16”, he said. “I can still remember scarcely having opened my mouth to announce I was getting a licence so I could ride his bike—when my mother stopped me in my tracks to say that I needn’t worry because she had already sold it!”

This was in the mid-1960s, when Triumph Bonnevilles, BSA Rockets and Norton Commandos were kings of the roads, he adds with a degree of wistfulness.

After coming to Japan to take part in the European Commission Executive Training Programme in 1983, he met a group of bike enthusiasts and finally got his licence and a bike so that he could tour across the country. But, after hanging up the helmet over 20 years ago, he never rode again. Until joining Triumph, that is.

“Product is obviously very important, it is the expression of the brand that we share with our customers and I wanted to understand the philosophy, the capabilities and the rational and emotional values the customer sees and feels in our products. 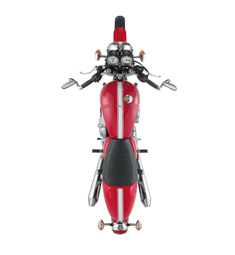 Named after the racetrack where Triumph once ruled, the Thruxton café racer is a sporty classic.

“So I decided to scratch the itch I had had since I was 16 years old. And I couldn’t resist the nostalgia, so I am riding a Bonneville T100, from our Modern Classics range”.

With its parallel twin 865cc engine, wire-spoked wheels, two-tone paint, “pea-shooter” silencers, and attention to detail—including fuel-injectors designed to resemble the carburettors of the day—the Bonneville T100 is truly a classic reborn.

It is also one in a surprisingly large and growing portfolio of machines: 22 in six genres.

“This is a 110-year-old brand that has been devoted to making motorcycles”, said Blume. “It starts there, with the history, the legend, the nostalgia, the fame, the glory. It’s the emotional fuel. An association with events, success and people, and it evolves into a range of high-tech, modern machines that evoke the heritage.

“The brand has terrific assets and we are privileged to be able to dip into that history for inspiration, and even to time-transport something like the iconic Bonneville into the new Triumph era”.

The Bonneville of the 1960s was the world’s fastest production bike of the day, forever linked with the motorcycle land speed record set at the Bonneville Salt Flats in Utah. Then there are the famous associations with Steve McQueen, Marlon Brando, Elvis Presley and James Dean.

“Everyone remembers that shot of Steve McQueen leaping his bike over the barbed wire border fence in The Great Escape”, said Blume. “And Steve, who was a serious amateur rider, did the stunt himself, riding his favourite Triumph, although obviously they couldn’t show that because he was meant to be in Germany”.

Triumph released a commemorative, limited edition replica of the McQueen bike this summer; it sold out in a matter of days.

The latest model to launch in this market is the Tiger Explorer, a 1,200cc adventure tourer equipped with one of Triumph’s powerful three-cylinder engines; shaft-drive and ride-by-wire electronics; wireless throttle; ABS and traction control; and even cruise control functions.

And while a certain US brand might hog the limelight in Japan’s big-bike market, Blume has absolute confidence in British technology and Triumph’s wide range of products, pointing out that a Triumph is a real rider’s bike for someone who wants to stand out from the crowd.

“Take the Triumph Thunderbird cruiser, for example”, he said. “This is no slavish copy; it is born from Triumph’s philosophy of building great road bikes, so it is not just designed to ride in a straight line. It is a powerful cruiser with our parallel twin engine that also handles, corners and stops like a sports bike”, Blume added.

“People want alternatives and they want to be different; Triumph offers them a real choice”.

Booms and busts
Originally based in Coventry, the firm can trace its roots back to when German immigrant Siegfried Bettman arrived in the city and started importing and selling bicycles. In 1886, the Triumph Cycle Company was born, building its first bicycle in 1889.

The firm branched out into motorcycles and, in 1902, put its first motorbike on the road. By 1907, production had been ramped up to 1,000 units at a new, purpose-built plant.

World War I was a boom period for the firm and, by the mid-1920s, Triumph was one of Britain’s leading manufacturers of both motorcycles and cars, turning out 30,000 motorbikes a year. But the Great Depression of the 1930s hit hard; the motorcycle and car units were separated.

With its production facilities badly damaged during World War II, the company shifted production to the West Midlands in 1942 and, once the conflict was over, was selling 70% of production abroad, including the Triumph Speed Twin and Triumph Tiger 100.

A decade after its debut, a Bonneville ridden by Malcolm Uphill won the Isle of Man Production TT at an average speed of 99.99 mph.

In the same year, Triumph controlled 50% of the US market for bikes over 500cc, but couldn’t keep up with technological advances, primarily by Japanese firms. This spelled the end of its domination of the roads. A series of buy-outs and failures followed, until the company finally went into receivership in 1983.

In the first five years, a mere 14 bikes were produced each week—although designers and engineers were quietly developing new prototype models and mastering production techniques.

Investing in all-new designs, state-of-the-art equipment and a new, purpose-built factory in Hinckley, Leicestershire, what Blume terms the “new Triumph” took the bike world by storm when the firm unveiled a completely new range of bikes in 1991, ranging from 750cc and 900cc three-cylinder units to 1,200cc four-cylinder bikes.

Triumph today produces 50,000 bikes a year, more than ever in its history, and is still growing and investing.

Triumph Japan was established in 2001 and, before dropping in the wake of the Lehman Shock in 2008, sales had grown continuously to 1,700 units a year. But they have almost recovered to that level, says Blume.