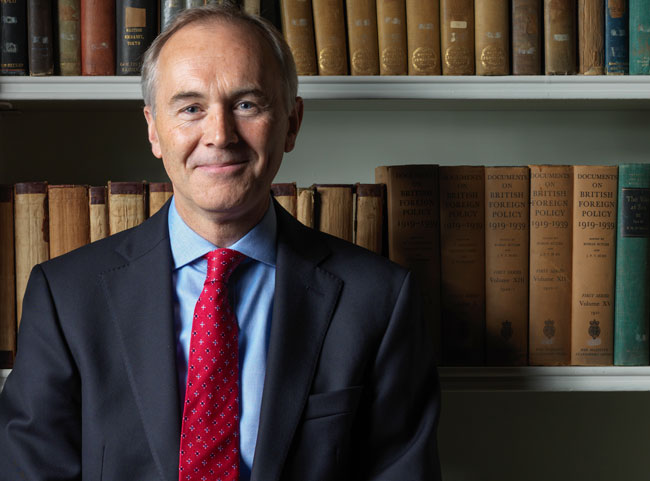 The United Kingdom Ambassador to Japan since 2012, Timothy Hitchens, age 54, will finish his four-year term in December. In an exclusive interview, BCCJ ACUMEN asked him about bilateral highs, lows, strengths and weaknesses, as well as his future plans and the new top diplomat who will replace him here.

Appointed Companion of the Order of St Michael and St George (CMG) in 2012, Hitchen’s busy career has included spells as assistant private secretary to the Queen and speechwriter for former foreign secretary Douglas Hurd, as well as senior diplomatic, trade and political roles for the Foreign & Commonwealth Office in Europe, Africa and Asia.

Congratulations on completing your four-year term as ambassador to Japan. What were your highs and lows?

The highs have to include the visit by Prince William to Japan, travelling in a speedboat from Haneda to the Rainbow Bridge, and then revving up the Aston Martin at Tsutaya Bookstore in Daikanyama. More seriously, taking Prime Minister Shinzo Abe to London and arranging for him to have an audience with the Queen and an overnight stay at Chequers—the first time a Japanese prime minister has done that since Prime Minister Kakuei Tanaka was the guest there of Prime Minister Edward Heath in the early 1970s. Really special.

Lows? I guess we all felt shock on 24 June, as the results of the EU referendum came through. Particularly that moment when Sunderland, home of the great Nissan plant, voted “leave”. But we take stock and move on.

What have been your main achievements … and disappointments?

I don’t really like to claim personal achievements—everything important is part of a wider group of people. But the moves forward over the last four years on the defence and security side have been pretty special. When I was interviewed for the job in 2011, I said we shouldn’t have inflated expectations of how far a defence relationship with Japan could go, but it has gone way beyond what I thought possible. The Typhoon jet visit, the first time the Japanese Air Self-Defense Force has exercised with anyone but the Americans, is simply a very visible expression of the range of what we are now doing together.

Disappointments? I’d like us to have got further in our collaboration on the 2020 Olympics on the commercial side, but that’s a task for my successor now! 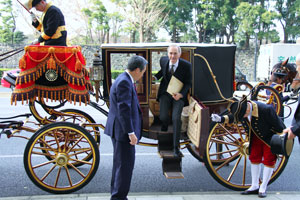 Arriving to present his credentials to the Emperor of Japan.

How would you describe the UK–Japan relationship compared with, say, the 1980s and 1990s—during the so-called bubble, and after it burst—when you previously worked at the British Embassy Tokyo in what was an era of trade tension?

The fundamentals remain rock solid. But Japan is a more modest, less confident country than 30 years ago. The Abe government has brought some very effective energy and dynamism back, and I think there is even more ambition Japan could show, especially in what it wants from the UK relationship. But the UK and Japan are both living through a very challenging international environment. When I was in Tokyo in the late 1980s, both the UK, led by Margaret Thatcher, and Japan, at the height of the bubble, were doing extraordinarily well, and the sky was the limit in terms of ambition for the bilateral relationship.

People who have been here a long time will remember Paul Madden, who was first secretary on the economic side in the early 1990s. He’s a Japanese speaker and has come from an illustrious career, most recently as high commissioner to Singapore, then high commissioner to Australia. So he knows the region, knows business well and will, I am sure, fit back in very quickly.

What are the main challenges he will face?

It will be for him to define them. But the biggest task for all British diplomats and public servants now is to make a success of Brexit, use it to reinforce our biggest relationships with countries like the US, Japan, China and India, and to display that mix of pragmatism and confidence that is the UK’s unique selling point.

We often hear clichés—a “flurry of diplomatic activity”, ambassadors being “summoned”, and about the alleged endless cocktail party circuit—but can you describe a real, typical day or week for a British ambassador in Japan, if such a thing exists?

Well, it doesn’t really exist. But, to give a flavour: If a minister is in town, I’ll be with her or him from breakfast to dinner, ensuring the right subjects are raised, sensitivities are understood and points are made politely but firmly. I will spend a lot of time calling on those in positions of power in Japan, to influence them and to learn from them. And by power, I mean politicians, media, businesspeople and grassroots individuals. I spend very little time with other diplomats, other than the Americans and Australians and my monthly EU ambassadors meetings. And every few weeks I will go out and about, to our office in Osaka, or to visit a company that is planning to invest in Europe. So it’s one of the most varied jobs I can imagine. 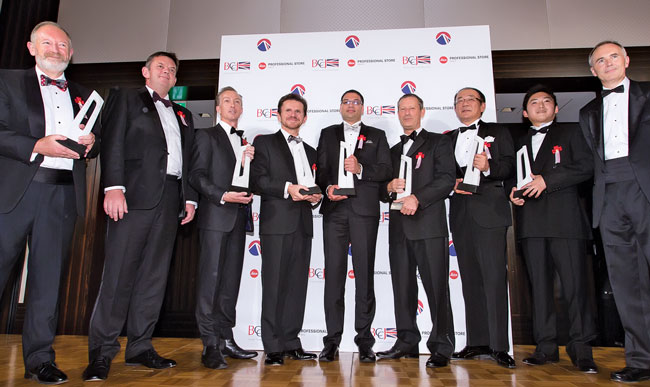 Posing with winners of the 2013 British Business Awards, including Custom Media.

The strongest are the inward investment, exports and defence relationships. The top-level political relations are very effective, too. And, of course, the Imperial family’s links with the Royal family provide an indefinable context. I’d like to see more links between our more junior politicians, building that network for future ministerial links. It’s coming, but is nowhere as strong as it was during the boom years.

When I asked you in January 2013 about any non-business-related advocacy issues you might raise with Tokyo, you said that disputed child custody cases were among the most distressing for the embassy to deal with. Have you seen any developments there, or with other contentious issues raised by Amnesty International, such as capital punishment in Japan or the human rights of Britons imprisoned here?

Well, Japan has now adopted the Hague Convention, and that has had a transformative effect on disputed child custody issues. So I’m very pleased with that. I’ve been very active supporting lesbian, gay, bisexual and transgender rights in Japan, and the annual Tokyo Pride event, at which I’ve spoken each year, has gone from strength to strength.

The other area I am personally delighted at is that a debate on the death penalty has started, at last. It’s been a long time coming. The Japan Bar Association, after a visit we organised to London over the summer, has come out in favour of abolition. These things take a long time to work through, but I feel quietly confident that we’ve reached a turning point.

Your tenure has been one of tougher UK spouse visa requirements, stronger UK–Japan military ties and, of course, Brexit. What else has prompted most complaints, tension, confusion, surprise or even praise?

Questions over our policy on China were a challenge in 2015, but our decision under the new British government this year on additional safeguards for the Hinkley Power Station in the UK, and our clear position on abiding by the rules-based international system to resolve disputes in the South and East China Seas has meant that 2016 has proved less choppy. 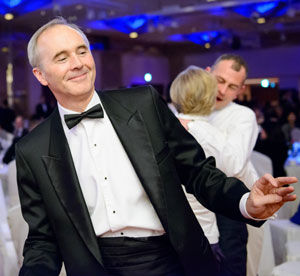 You are fondly remembered for being the first guest ever to get up and dance at a British Business Awards, with your wife Sara in 2015. Is the traditional image of the British diplomat’s stiff upper lip becoming less accurate?

I think those images have always been a bit outdated, at least during my 33 years as a diplomat. The key now is to be approachable, authentic, have a bit more personality and, more recently, develop a digital personality, too. One of the biggest challenges in Japan is the way in which people tend to treat you with deference—all that “Your Excellency” business—and it’s been important for Sara and me to be ourselves, whoever we’re meeting—be it a prince, a prime minister, a sumo wrestler or the receptionist.

You are probably planning a long holiday before you return to the UK, perhaps with a trip home to your beloved Devon. What then?

We’re hoping to travel in South-East Asia for a while, before returning to a wet and windy London! After that, options are wide open. Are you offering me a job?

Well, you certainly have a lot to offer any UK-run company in Japan! Will you continue to write “twaiku”, and what reaction have you had to your book of tweeted haiku published in August?

No, I said in the introduction to the book that my twaiku will go silent when I turn my @UKAmbTim account off, when I leave in December. I’m sure in my new life I will have plenty more creative challenges, and it’ll be important for Paul to find his own voice. The book is doing very well—lots of interest, including a great event at the Hankyu store in Osaka in October and reviews and interviews in some national papers. It’s very flattering, for something which was essentially a bit of whimsy. 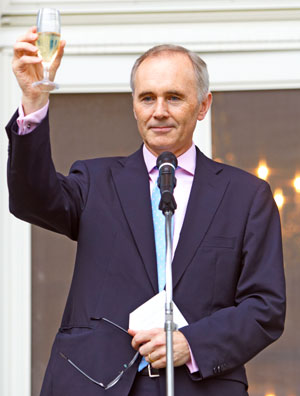 At the Queen’s Birthday Party in 2014

Any farewell message to Britons or UK businesses in Japan?

I’ve been very lucky to be supported by a really great British community here in Japan. We’re a nice mix of transients and long-stayers, and that gives us a balance of enthusiasm and wisdom. I’ve visited all but two prefectures in Japan (Fukui and Miyazaki still to go) and over 100 countries in my diplomatic career; there’s nowhere I’ve enjoyed more, and been formed more by, than this great country. You are lucky to be staying on!