What Tokyo’s Cambridge and Oxford Society is really like

• Founded in 1903, restarted after WWII
• Two-thirds of 270 members are Japanese
• Three members from the imperial family
• Call for a society open to all UK graduates

The exact date of the first meeting of what would later become The Cambridge and Oxford Society may have been lost in the mists of time, but the aims of the association are not in doubt.

The constitution states: “The object of the Society shall be to provide opportunities of social meetings for Cambridge and Oxford men and women”.

The Cambridge Society, as it was then known, was set up in Tokyo in 1903. The organisation today has about 270 members and holds regular social get-togethers and sporting events for members.

Currently, three members of the imperial family, namely, Crown Prince Naruhito, Crown Princess Masako and Princess Takamado, belong to the society. Thus, a party was held in November to congratulate Princess Takamado—who attended Girton College, Cambridge—on the PhD she had received from Osaka University of Fine Arts earlier in the year for research on netsuke, miniature sculptures that were popular in the 17th century. 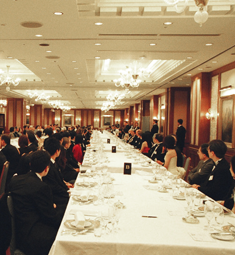 Tim Minton, a professor with the School of Medicine at Keio University and one of seven secretaries of the society, is keen to play down any suggestions of snobbery within the club.

“The members are from a wide range of backgrounds and careers, from people fresh out of university to former ambassadors”, said Minton, who read French and German at St John’s College, Cambridge. “There is the impression that [the society] is elitist and stuffy, but that’s not the case at all.

“Japanese people are very big on alumni organisations and all the universities have them”.

The earliest surviving records of The Cambridge and Oxford Society date back to 1921, with an entry in the club’s Minute Book No. 2 recording that the “37th Annual Meeting and Spring Dinner were held at the Tokyo Club on 10 May, 1921”.

A 1995 essay, marking the 90th anniversary of the society and written by Giro Koike, formerly a Magdalen College, Cambridge student (1931–1934), pinpoints the founding year as 1903. It also detailed the Cambridge Society’s acceptance, in 1905, of colleagues from Oxford University and the change in name to incorporate both universities.

The society was mentioned by Algernon Bertram Freeman-Mitford, the first baron Redesdale, who attended the University of Oxford’s Christ Church college, before arriving at the British Legation in Tokyo at the time of the 1868 Meiji Restoration.

In The Garter Mission to Japan, he notes: “A gathering of the Cambridge Society of Japan is, therefore, an assembly of gentlemen highly cultivated, not only in the learning of their own country, but also in those branches of study which are taught in our universities, and the conversation is perhaps more varied in such a group of men than it is in any similar body in the world.

“Questions of science, questions of letters, of history, of political economy, of philology, are discussed with just that tinge of oriental imagery which gives a spark of the divine fire to whatever it touches, stifling pedantry and brightening the narrow dullness of the common room”, Mitford wrote.

The society went from strength to strength until World War II interfered in its activities. A note in the society’s minute book on 19 January, 1942 indicates that no further meetings would be held. However, the society was resurrected in 1950 and regular meetings resumed.

In the intervening years, the British ambassador to Japan has generally accepted the post of society president, although Sir Hugh Cortazzi, who held the post between 1980 and 1984, was not qualified as he had instead attended the School of Oriental and African Studies at the University of London.

Minton’s connection with Japan began while he was at Cambridge University and, as a member of the college choir, came to Japan in 1980 on a two-week tour. During a series of recitals in Tokyo, Fukushima, Sendai, Kanazawa, Kyoto and Takamatsu, he met his future wife.

He returned to Japan in 1983 and taught at a private language school before joining Nippon Medical School the following year.

Minton, who has three grown-up children, joined Keio University in April 2012 and is responsible for all undergraduate English programmes in the university’s renowned medical school.

About two-thirds of The Cambridge and Oxford Society’s membership is Japanese, the remainder being primarily British, but including former students from Malawi, Australia, Italy and Hong Kong.

To be eligible for membership, candidates need to have completed at least nine terms at either Cambridge or Oxford university, or to hold a degree or diploma from either institution. However, the society also accepts applicants who have completed residence of not less than one academic year.

Except in August, meetings are held twice a month. One of the gatherings is an informal event held at a Ginza hotel on the second Tuesday of each month.

As the society approaches its 110th anniversary in 2015, Minton believes that there is a place in Japan for an umbrella organisation for graduates of all British institutions of higher education.

“I would very much like to see a society that would be there for the good of all graduates of British universities. I’m sure we would be keen to be a sister organisation to that”, he said.