Kote Sato was only able to get to the spot where his liquor store had once stood three days after it was washed away by the tsunami that struck the Utatsu district of Minami Sanriku. When he saw it—and the nearby spot where his home had been—he says he had “no words” to describe his feelings.

“Some people were crying as they looked at the remains of the town, but I just felt this great emptiness”, he said. Sato was lucky in some ways, he says, and was overjoyed to find his son was safe and well; but his self-confidence was as shattered as his home.

“I just didn’t have the energy or the motivation to start the business from scratch again”, he said with a shrug.
Almost a year later, Sato is proudly displaying his new venture, a liquor store that is one of a number of new shops that have been set up in a covered market on the hill that rises behind the town school. 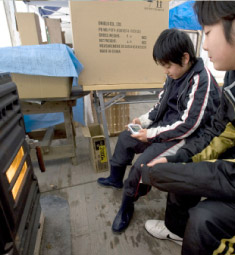 The Isatomae Shotengai tent market in Minami Sanriku, Miyagi Prefecture, serves as a meeting spot for locals and a place to keep warm.

Supported by Refugees International Japan (RIJ)—and particularly with funds raised by specialist importer Whisk-e Ltd. and the encouragement of a delegation from whisky firms in Scotland that visited in November—the Isatomae Shotengai tented market in Minami Sanriku, Miyagi Prefecture, is becoming a new focus of this ravaged community.

“We have funds to distribute and we are listening carefully to get an idea of what people want to do”, said Jane Best, RIJ chief executive officer. “We want our funds to reach the communities that require them and have a use for them.

“We don’t just want to give communities money; we want to get them going again”, she explained. “People are still suffering and wondering about what they should do and how they can move on, so it will take time to get it right, but we’re here for the long-haul”.

Richard Myerscough, a trustee of RIJ and country manager for Japan at Virgin Atlantic, visited the snow-bound covered market for the first time in March this year and was impressed by what he saw. The hair salon, for example, was doing a steady business and had provided an all-important “feel-good” factor since opening in October 2011. Meanwhile, representatives of the Japan Woodland Biomass Network were also present promoting environment-friendly stoves that consume wood-chip pellets that would otherwise go to waste.

Two blazing stoves kept the sub-zero temperatures at bay and proved popular with children who had stopped by.

“With pieces of infrastructure beginning to reappear locally, we are now seeking ways to take this whole project forward again and give it a new lease of life”, said Myerscough. “It has to be sustainable and community-run to work over the long-term and that’s what we’re aiming to ensure”.

The response to the disasters of March 2011 from all sectors of the British community in Japan—corporate, charitable and individual—has been phenomenal.

The Japan Society, for example, has been working with the Sanaburi Foundation through the Sanaburi/Rose Fund to support NPOs and voluntary organisations working on projects in the Tohoku region. Projects include support schemes for evacuees, tackling dependency issues, as well as activities targeting mothers and children who have been forced to leave the zone around the Fukushima Dai-Ichi Nuclear Power Plant.

The society, headquartered in London, has raised more than £650,000 to be distributed to those in most need. 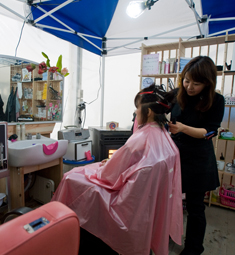 Inside the market a woman has set up a hair salon.

The UK branch of the Sasakawa Foundation is also providing professional psychological support to children who were victims of the disasters; it airlifted 10,000 disposable feeding bottles in the immediate aftermath of the quake, and provided grants to enable Japanese students who lost family members to spend time in the UK.

Second Harvest Japan was one of the first organisations on the scene after the disasters, distributing food and emergency supplies in towns including Minami Sanriku, Ishinomaki and Ofunato.

“We believe that long-term support for the people of the region will lead to reconstruction”, said Charles McJilton, executive director. “Now the early emergency phase has ended and evacuees have moved into prefabricated emergency housing we will keep responding to those changes.

“Thank you. Just two words”, he added. “In English, it seems so inadequate to express our deep gratitude for the support we have received and continue to receive. Please know that your support means so much to us and the people we serve”.

Unilever Japan has been providing assistance through its four globally aligned partners—Save the Children, Oxfam, the World Food Programme and Unicef—and has provided cleaning and hygiene products, food, as well as funds that have come from the firm’s employees and those consumers who have participated in events sponsored by the firm.

On top of that, one in 10 of the firm’s staff have participated in volunteer weekends over the past year to help with the clean-up challenge, according to chief executive officer Ray Bremner.

“We are now looking to help further in 2012, with more volunteer work and also by participating in longer-term projects to help restart Tohoku—and much of that work will be aimed at children”, he said.

“We have recently donated sufficient funds from a consumer-directed promotion which will allow Save the Children to construct five play parks in the towns most affected”, he added. “We hope to restore normal life to children as soon as possible, to raise their spirits and help them feel positive about where they live, giving them the potential to live there happily and in normal circumstances”.

Property and hospitality firm EastEdge Partners, Inc., is also attempting to put a smile back on the faces of children from the affected areas, and is inviting children from Minamisoma to have a holiday at its Azumaya Kogen Hotel in Nagano Prefecture in late March. It is also coordinating an art workshop and raising funds for Minamisoma through the “Live Colourfully!” project. 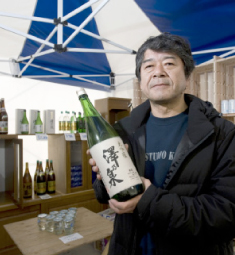 Nissan Motor Co. has provided more than ¥400mn in support with cash and in-kind assistance, providing relief supplies, 65 Leaf electric cars and 50 Patrol vehicles to NPOs, United Nations agencies and local governments. In Iwaki City, where the firm has a manufacturing facility, it has loaned the local authorities Leaf vehicles and provided water and nappies to local residents.

“We are committed to continued production at our Iwaki and Tochigi plants and recognise their long-standing importance to the social and economic vitality of communities in the Tohoku region”, said Simon Sproule, corporate vice-president for global communications.

“Iwaki was one of the worst-hit plants, and the initial fear of the community was that we would close the plant”, he said. “[Chief executive officer] Carlos Ghosn visited the plant soon after the quake and committed to its long-term future. That was a massively important statement of commitment and a motivator for the employees and local community. “Recovery from the earthquake is a great example of the power of monozukuri [the Japanese form of manufacturing] in Japan and at Nissan”, Sproule added. “Nissan’s operations were restored well ahead of almost everyone’s expectations.

GlaxoSmithKline K.K. was another firm quick to act when the disaster struck, providing about ¥250mn in funds and ¥270mn in products, with volunteer members of staff delivering relief goods to the affected areas.

Soup kitchens were set up by the firm in evacuation centres and staff packed food parcels and helped in mopping-up operations. The firm has also set up the Orange Scholarship, which is designed to aid university students majoring in pharmacy and who are having problems continuing with their studies, while another project sponsors indoor parks for children in Fukushima Prefecture.

“We strongly believe that supporting the region from a long-term perspective is one of our company’s responsibilities and we are aiming to build trust with the communities which have suffered as a result of the disaster”, said Yoshiaki Komatsu, of the corporate communications department.

Other firms have contributed according to their particular skills and abilities, with the Shangri-La Hotel, Tokyo, immediately opening its banquet rooms and inviting people stranded in the city centre on 11 March to take refuge. The hotel started a website (WISH.forJapan), with a percentage of sales from rooms and restaurants buying fresh fruit and mosquito nets.

In October, the hotel also pledged ¥20mn for the construction in Sendai of the Rainbow House for students who lost a parent in the disaster.

Another initiative involved a campaign with Meat and Livestock Australia to build new partnerships between the beef industries of both nations and facilitate new exchanges.

“We believe that a long-term commitment is required to reassure people that Japan has overcome the disasters and is determined to pursue a path towards revitalisation and shared prosperity”, said Jonathan Kushner, a partner with the firm, adding that future efforts will focus on enhancing innovation, cultivating domestic demand and drawing on global opportunities. It’s only when disaster strikes and technology fails—such as after the 11 March earthquake and tsunami last year—that we realise how dependent we are on technology.