Ever wondered what happens at a Buckingham Palace investiture?

We knew that the queen would not be officiating on the day as the Union Jack, rather than the Royal Standard, was flying above the palace. However, our spirits were not diminished and we were curious as to whether Prince Charles or the Princess Royal would be overseeing the proceedings.

The footman greeted us and our names were checked to make sure we were in the right place for the investiture. Although I knew that the establishment is good at pomp and ceremony, it is only when you get to experience it first hand that you truly appreciate the work that goes into making it feel seamless.

The Life Guards, resplendent in immaculate red and white uniforms with shiny breastplates, stood like statues in the reception area while we were directed to the cloakrooms to divest ourselves of cameras and mobiles before being invited to ascend the grand staircase.

The magnificent paintings, sculptures, and ornate ceilings oozed history and opulence as we tried not to trip as we gazed around, hoping that one foot was still going in front of the other.

The award recipients were directed to the Picture Gallery, a room that could easily be mistaken for a museum as the walls are adorned with a magnificent collection of Italian, Dutch and Flemish masters mainly from the 17th century.

While waiting for the ceremony to start, I introduced myself to the growing number of people in the reception area. On the day, 93 people—from military and civil backgrounds—received awards.

Graham Cole, an actor from The Bill TV series, paralympians Mark Colbourne (cycling) and Hannah Cockcroft (athletics), members of the armed forces, including Lance Bombardier Benjamin Parkinson of the Royal Artillery, as well as Nana Nyarko, for services to London’s buses were collecting their awards. They represented a real cross-section of the public who were all rightly recognised for the various contributions they had made to society.

The instructions for the investiture were delivered in a humorous, yet appropriate, way so everyone knew exactly what to do and when, including how correctly to address the Prince of Wales, who would be officiating.

The national anthem signalled that the Prince of Wales had arrived in the ballroom and the investiture had begun.

My name was called, and for the seventh time since 10am, I was asked to confirm my name and award.

After moving into an adjacent corridor through the back of the ballroom, the Prince of Wales was visible on a small dais in the centre of the room. He was surrounded by a number of people wearing military uniform, including five members of the Queen’s Body Guard of the Yeomen of the Guard and two Queen’s Gurkha Orderly Officers.

After leaving the ballroom, the recipients entered an adjacent corridor to be called to appear before Prince Charles.

We were instructed to move when one’s surname was called, turn to face the prince, bow one’s head and walk forward two or three paces to the front of the dais.

The prince pinned the medal on the hook that had previously been placed on my jacket and offered his congratulations. He led the conversation and asked whether I wore my kilt in Japan and the state of business here. He then offered his hand to shake—the signal to withdraw backwards with bowed head. It seemed like several minutes had passed but, in reality, it was probably only two.

On leaving the ballroom, my medal was removed and placed in a box, which was later given back to me with an order of service. I was then directed to the back of the ballroom to watch the remaining guests receive their awards.

As the proceedings continued, the Orchestra of the Band of The Royal Artillery played a selection of music from Elgar to Ravel. At 12:10pm the orchestra played the national anthem and the Prince of Wales and his entourage left the ballroom. We were then all invited to leave.

The official photographs were being taken in the quadrangle after the ceremony and, as the Yeoman of the Guard arrived out of a side door, a carriage drawn by two magnificent bay horses arrived to take them back to their barracks. It was too good an opportunity to miss: I had to have my photograph taken with the Yeomen.

My feelings about the day can be summed up in one word: pride. Pride at being recognised for the work I had done in promoting British business in Japan; pride in wearing my kilt; pride in being British and visiting Buckingham Palace; pride in having my partner Anne, my sister Jane and my daughter-in-law Kirsty with me; and pride in being part of a truly memorable experience. 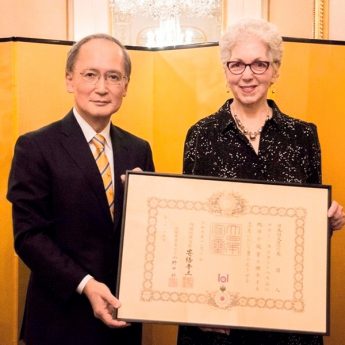 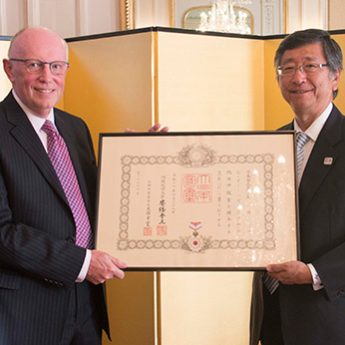 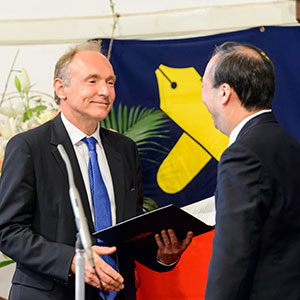