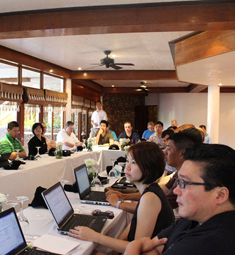 Unigroup Worldwide UTS employees at an Asia regional conference in Boracay, the Philippines, on 16–20 January

Relocation firms in Japan have experienced tough challenges since the March 2011 Tohoku earthquake and tsunami, which caused the market to shrink and the relocation industry to become even more competitive.

With many expats prompted by the triple disaster to leave the country, there was a brief, albeit considerable, spike in export revenues. But with this came concern regarding whether the expats would return. The community here is in a state of flux—even now—and it is difficult to predict what the future might hold for the relocation industry.

As disaster-related issues started to resolve themselves very slowly, the industry faced shrinking inbound shipments. Business from some sectors continues to decrease, leaving a cloud still hanging over the industry.

A possible cause of the ongoing situation might be that a majority of people planning to move here from abroad are being allocated smaller baggage allowances than previously.

In addition, compared with pre-Tohoku earthquake figures, there are fewer trainees and young employees heading this way.

This has left movers facing stiff competition. The relocation market had been expected to stabilise last December, and experts predicted that it would return to its pre-quake size early this year. But so far, inbound business has been limited. This is not surprising, given the impact that fear of radiation has when firms overseas consider assigning staff to Japan.

In contrast to preferences evident prior to the quake, these days there appears to be more project-based activity among overseas organisations in Japan. Although these firms might have long-term agendas, they are choosing to take a short-term view for staff assignments. This they hope will place them in a better position to deal both with any nuclear-related safety issues that might arise here, and the prevailing worldwide economic insecurity.

In addition, one cannot ignore the impact of the strong yen that, even prior to 11 March 2011, had driven many Japanese businesses offshore, while forcing others to become global players in order to survive.

Fortunately, since the Liberal Democratic Party of Japan was returned to power in December, the strength of the yen has eased somewhat, and Japan’s stock market has seen some gains. The question now is how long this might last, and whether the economic policies proposed by the new administration are feasible and effective.

For the time being, despite the straightened economic conditions, in order to function optimally and remain competitive, our firm has been adapting its services, introducing maximum cost savings, and conducting thorough job procedure reviews.

As is the case with any firm conducting business overseas, our pricing strategy is very sensitive to exchange rate fluctuations. This is particularly true of the yen/US dollar rate, since ocean freight rates and most relocation-related services in destination countries are dollar-denominated. The ideal situation for us would be a rate of ¥100/$1 but, unfortunately, that seems unlikely for the moment.

In the meantime, we continue to introduce such strategic changes in our business practices as we believe can help reduce the risk of immediate, major exchange rate-related losses. At the same time, this makes it easier to do business with organisations overseas.

The relocation industry is undergoing some very exacting changes. If our industry is to benefit from these, we must look to innovation on many levels for the best and most lasting solutions.