Why do mums often find it hard to integrate into the workforce following maternity leave?

Many firms in Japan have taken a progressive approach by implementing new policies for working mums such as flexitime and work-from-home initiatives. However, in some instances these policies exist only in theory or are not enforced.

As in many other countries, authority rests with employees’ direct manager rather than the HR department. From a cultural perspective, many Japanese are accustomed to working long hours to demonstrate commitment, leaving the workplace only after the boss does so.

Some firms have set working hours, with a finishing time of 4pm but most employees feel they are expected to work well past finishing time. Furthermore, when they look around and see most other employees staying late, they feel it’s only natural to do so.

Working environments like this lead to mums—who are generally the primary care giver—feeling guilty about having to leave the workplace at finishing time to pick up their children. To avoid this, HR departments have to work closely with senior management to educate them on the benefits of these policies to the overall business.

At Michael Page’s Tokyo office there are six mums and 15 dads. Initially, they were reluctant to take advantage of flexible work arrangements out of concern for how they would be viewed.

But now, as a result of coaching, time management, remote access and, most important, the support of team members, they do. Now we are employing more working mums than ever.

It’s critical to promote such flexitime programmes to potential employees; it should be part of recruiting efforts.

How can hiring managers and senior leadership be persuaded that working mums add value?

There are three main reasons to hire more women.

Second, since half of all consumers are women, female employees can offer insights into how better to appeal to, and reach, them. For example, Panasonic Corporation released a successful line of beauty-care products designed by, and for, women. This has created an entirely new market for the firm.

Third, research shows that firms with more women in management tend to perform better than others. A recent study found Fortune 500 companies with the highest representation of women at board level performed significantly better than their peers, with a higher return on equity, sales and invested capital.

In Japan, the ratio of women in managerial positions in the private sector is 9.2%. The government initially set a target of 30% but has been slowly backtracking to a less ambitious target over the short term.

As for work–life balance, a recent survey by Japan’s Ministry of Internal Affairs and Communications’ Statistics Bureau found that about 26% of Japanese firms with over 1,000 staff have implemented flexitime. But, in firms with 100 staff or less, that drops to a mere 3%.

What can the government do to enforce or incentivise HR policies supporting working mums?

Japanese politicians have been debating day-care facilities with vigour since February 2016, when an angry blog post from a mum who failed to find a day-care place sparked a groundswell of public outrage.

Moreover, a recent poll by the Ministry of Health, Labour and Welfare found that, while 93% of parents were able to find a day-care centre for their children, 58% said it was not the facility they wanted.

We are increasingly seeing firms that offer benefits for working parents. I am aware of some that have their own day-care facilities, for which working mums pay a substantially reduced rate.

Others have cafeterias so that employees can quickly get meals in the office rather than preparing and eating breakfast or dinner at home. Some even have rest areas where employees can take a short nap.

I think we’re beyond the stage of debate. The Japanese economy needs more workers and

Japanese women are more than capable of filling the gap.

Japanese women are already prominent and influential in society, and they are just starting to leave their mark on the corporate sector. Some progressive firms have to start leading by example. Then, in a short time, many are likely to follow suit. 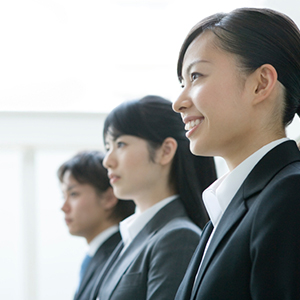