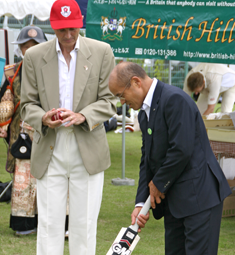 A team from the British Embassy Tokyo played a match against a team drawn from Tohoku in the town of Minamisoma, Fukushima Prefecture, on 7 September.

The match was played on the town’s baseball field approximately 25km from the Fukushima Dai-ichi Nuclear Power Plant.

“We wanted to come because the people in places like this are being forgotten”, said British Ambassador Tim Hitchens. “Obviously there is a question of safety, but the British government has from the start been led by science in its response to the situation at Fukushima”.

“The place where we have played today is perfectly safe”, Hitchens said. “I come from Devon and there is a lot of granite that has greater background radiation levels than there are here”.

Tests carried out on the pitch shortly before the game showed that the radiation level was 0.6mSv per hour, similar to naturally occurring radiation in places such as Aberdeen and Cornwall.

“We are not playing down the problems that exist at the Fukushima plant or for the people who are having to deal with the situation here”, he said. “But we are one of the leading nations helping Tokyo Electric Power Co. tackle this problem”.

Just days before the nation marked two-and-a-half years since the Great East Japan Earthquake and the massive tsunami that it triggered, new questions had been raised about the circumstances at the power plant.

The British Embassy Tokyo, however, is keen to quell unfounded fears of radioactivity.

It wants to emphasise that radiation levels outside the exclusion zone are largely within permissible levels, and that life goes on as normal for the residents who have decided to remain in their communities.

The cricket teams were greeted by four local men dressed in traditional clothing and blowing a tune on giant conch shells. Katsunobu Sakurai, the mayor of Minamisoma, said that efforts are continuing to rebuild the lives and livelihoods of residents.

“The people of Minamisoma, Fukushima Prefecture, and the whole of Japan are very grateful for the support that you are showing us here today”, Sakurai said.

“The worry is that people are starting to forget, and there is just not enough information from reliable sources out there to say whether a place is safe or not. Japanese towns don’t get the British ambassador stopping by all that often”, Miyaji told BCCJ ACUMEN.

Miyaji, a Japanese-Scottish player, has been recognised by Scotland’s parliament for his contribution to promoting the sport in Japan.

“This is a chance for all of us to be reunited and I hope we can build on this”. 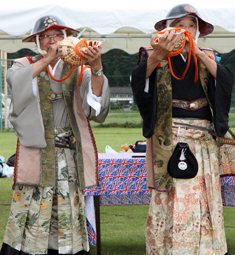 Teams were welcomed by local people in traditional dress blowing a tune on huge conch shells.

The impact of the triple disaster of earthquake, tsunami and nuclear accident is still evident in Minamisoma.


Workers in protective clothing operate bulldozers and diggers in fields on either side of the main road, scraping off the top layer of soil and collecting it in huge bags that are then covered with blue tarpaulins.

Some homes are obviously inhabited, but just as many are derelict and being reclaimed by undergrowth. Vehicles sit outside homes with flat tyres. Farms have fallen into disrepair and shops and restaurants have been abandoned.

“There is much misunderstanding about the situation and that is in large part due to the fact that most people are simply unfamiliar with the concept of radiation”, said Dr Keith Franklin, who is captain of the embassy cricket team and has been seconded to the British Embassy Tokyo since September 2011 from the National Nuclear Laboratory.

“I have been to the plant three times so far and I have been very impressed by the progress they have made on the large-scale construction tasks that needed to be tackled”, Franklin said.

“We wanted to have this match today just to demonstrate that it is safe to be in Fukushima Prefecture”, he said.

The embassy team lost the limited-overs match by 34 runs.