Asked to name the best wine-growing nations, the first to come to mind for many people would be France, Italy, Australia and Chile. But increasingly England is asserting itself as a force to be reckoned with, particularly when it comes to sparkling wine, and several UK wineries have secured top prizes at the Decanter World Wine Awards.

With British alcoholic beverages earmarked for a special promotional push this financial year by the Department for International Trade, a tasting event was held together with the Wine and Spirit Trade Association at the British Embassy Tokyo on 16 May. The event gave Japanese buyers, distributors and media a chance to sample some of the finest sparkling wines that the UK has to offer, as well as a range of craft gins. 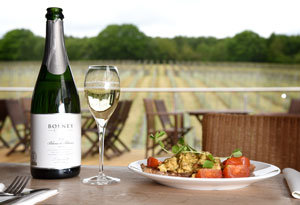 Own path
The question for many consumers is what distinguishes English sparkling wine from the better-known Champagne.

“We use the traditional methods and, in England, the great thing is we use the knowledge that has been used for centuries in Champagne, but we’re not bound up by the rules”, explained Charlie Holland, winemaker at Gusbourne Estates Limited. “We pick the bits we want to use and we don’t choose the bits that are restrictive, so we’re allowed to be much more creative in what we do.

“We used to compare ourselves to Champagne in the same way the Californians did with Bordeaux, the same way New Zealand did with Burgundy, with Pinot Noir”, he continued. “Now we have come of age we’re saying, ‘Okay, we have our identity which is unique to us—let’s focus on that’”.

The growth in English sparkling wine is in part due to improved conditions in the south of England. Those conditions now arguably surpass those in Champagne.

“Climatically, we are where Champagne was in the ’70s, due to global warming”, said Holland. “Climate change brings inconsistent weather, but we can now ripen these grapes.

“In a hot climate, the sugar goes up, the acid goes down and the flavours don’t always have time to develop. But [in the UK] the sugars climb very slowly, the acidity goes down very slowly, so you get a much longer growing season, and it means you can pick ripe flavours, but still have the acidity remain fresh, so that’s probably what puts us in that sweet spot”. 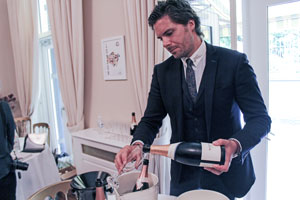 Anthony Carfantan, Nyetimber’s head of sales, pours out a glass of wine at the British Embassy in Tokyo.

Making an entrance
It was the first time many of the winemakers had come to Japan, although some of their brands were already available in the market. Other representatives, meanwhile, were looking to secure their first distribution deal.

“We have no distributor in Japan, that’s what we’ve come to look for, because we don’t need to sell huge amounts”, said Rebecca Hansford, co-founder and president of Furleigh Estate, a sparkling wine producer in Dorset. “We only make about 50,000 bottles a year, and we intend to keep it like that, because at the moment we grow our own grapes and my husband is the winemaker, so we can control the quality if we keep to that scale.

The choice to explore the Japanese market was no accident. While other countries, such as China, have a significant and growing demand for wine, English sparkling wine is a specific kind of product.

“For English wine, you need a sophisticated market, meaning that they know wine, they like Champagne and also I think for English sparkling wine you need a market that is willing to try new things”, said Hansford. “The person who always has to have the latest mobile phone, that’s what we need. And I think Japan is good on that score”.

For the firms involved, the trip to Japan presented the opportunity to gauge the reaction to their products, and also establish the viability of certain categories that, in recent times, haven’t been as popular.

“Rosé had become very unpopular because it was sweet and terrible, but now dry luxury rose is back as a force in Europe and it seems like it’s starting to develop here in Japan as well. So we’re interested in gauging the reaction”, said Trevor Clough, co-founder and chief executive officer of Digby Fine English.

As part of English wine’s positioning in the Japanese market, the wineries are having to consider food pairings. But although Japanese cuisine is radically different from it’s British counterpart, the prevalence of fish and other seafood was taken by participants to be a good thing for the prospects of English sparkling wine.

“In England, it’s a classic thing: we have it with oysters, with seafood, shellfish … for me, it’s the ideal thing to mix with sashimi, sushi”, said Gusbourne’s Holland. “With the acidity we have in the wines, it seems to match really well. So for us, it’s the perfect match for the food”. 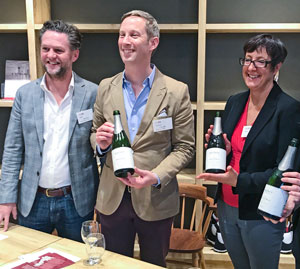 On 18 May, members of the British Chamber of Commerce in Japan (BCCJ) got a chance to try some English sparkling wine at the Life Science Hub in Nihonbashi. Attended by Digby Fine Wines and Bolney Wine Estate, members were able to sample a range of wine, including Digby’s Vintage Reserve Brut 2009—a mix of chardonnay, pinot noir and pinot meunier grapes—and Bolney’s 100% chardonnay Blanc de Blancs 2010. By all accounts, the event was a great success.

“We wanted to introduce our wines to all and hope that then the BCCJ and its members will be ambassadors of our English sparkling in Japan”, said Bolney Wine Estate’s winemaker and Managing Director Sam Linter. She had also been present at the British Embassy Tokyo’s wine tasting event.

“We were very pleased and encouraged by the reaction to our wines,” she added, saying that Kew Sparkling Rosé was the most popular with BCCJ members.

The BCCJ wine tasting capped off a very successful trip for both Bolney and Digby. On the Monday before the BCCJ event, the two firms were able to showcase their wines to 23 members of the Japan Sommelier Association at an evening hosted by Japan’s top sommelier Yoichi Sato, where the wines received a very favourable response. And that was in addition to a number of other tasting sessions and media events.

“It was a busy week, with a huge amount of interest and very favourable comments on our wines”, said Linter. “The main benefit was to see how well the wines were received and the ability to start building our category in Japan.

“Our production is targeted to grow by three times over the next five to seven years, and part of this growth we would like to see exported to Japan”, she continued. “So our hopes are for a slow and solid build of wine sales in Japan. We see this as an important future market for us and want to keep visiting”.