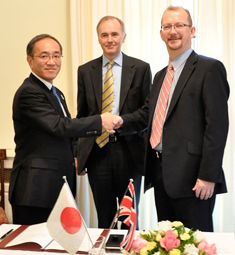 
National Air Traffic Services (NATS), the UK-based provider of air traffic services around the world, has linked up with Mitsubishi Research Institute, Inc. (MRI) to look into “exciting” new opportunities in the aviation sector in Japan and throughout the Asia-Pacific region.

Richard Deakin, the UK firm’s chief executive officer, told BCCJ ACUMEN that the firm is aiming to capitalise on the new opportunities that are emerging in a part of the world that has huge potential for a sharp rise in the number of people flying.

“We are looking at joint areas of aviation development within Japan, and in the region as a whole, as the market is beginning to pick up from a demand point of view”, Deakin said.

The potential is vast, he added, pointing out that, while Narita International Airport can handle about 180,000 take-offs and landings every year, the advanced air traffic handling capabilities of London’s Heathrow Airport mean it sees no fewer than 480,000 flight arrivals or departures over the same period. However, both airports have an identical number of runways.

NATS and the leading Japanese think-tank and IT solutions service firm signed an agreement at a ceremony at the British Embassy Tokyo on 4 February. They will look into opportunities to collaborate in a range of air traffic management projects, expected to include traffic flow systems throughout the Asia-Pacific region, as well as methods of increasing capacity and optimising ground operations at a number of airports in Japan.

“Civil aerospace is a sector to which the UK government attaches a great deal of importance. It is a real pleasure to see that NATS and MRI have now signed a memorandum of understanding to enable them to work together in providing the latest, modern flight-management services to airport projects both in Japan and overseas”, said British Ambassador Tim Hitchens.

NATS is already working on a number of projects in Asia, including designing an air space management system for Hong Kong and assisting in developing a third runway. The firm recently signed a five-year strategic partnership with Singapore’s Changi Airport that will help increase capacity 40%. In all, the firm is working in 30 countries across six continents.

“This is a fantastic opportunity to continue our growth in the Far East, and MRI is an ideal partner”, Deakin said.

“NATS’ world-class knowledge and expertise in air traffic management, combined with MRI’s knowledge of the Japanese and Asian markets is an exciting proposition and I look forward to the results”, he said.

He added that, as well as the obvious importance of matching requirements in business, MRI had shown similar cultural sensitivities that bode well for the future of the joint venture.

“[The agreement] will help consolidate our domestic competitiveness, while a fusion of NATS’ and MRI’s knowledge and expertise will support further development in the wider Asia-Pacific region”, he added. “This will be a wonderful partnership”.

NATS can trace its history back to the foundation of the National Air Traffic Control Services in December 1962, and provides air traffic control from centres at Swanwick in Hampshire and Prestwick, Ayrshire.

The firm also operates air traffic control services at 15 of the UK’s largest airports, including Heathrow, Gatwick, Stansted, Birmingham, Manchester and Edinburgh. Between 2011 and 2012, it handled no fewer than 2.2mn flights across the country and the North Atlantic Ocean.

NATS is also playing a key role in the initiative to harmonise air traffic control across European airspace—an issue that will be important in the Asia-Pacific region in the years ahead.

The firm has taken on several projects in Japan in the past, including studies to increase capacity at regional airports. Deakin said the relationships that grew out of those initial contacts have helped the firm to reach this point in its evolution in Japan.

He also expressed gratitude for the advice and support of the UK Trade & Investment office at the British Embassy Tokyo for helping NATS “get that all-important foot in the door”.

However, Deakin admitted, “I never thought I’d be coming to Japan to show people here how they can be more efficient”.