Right up until his death in March, the founder of the National Ex-Services Association (NESA) was vocal in his criticism of the British government for refusing to recognise the suffering of a former navy mechanic who believes that exposure to radiation after the bombing of Nagasaki is the cause of his cancer.

Arthur Lane was fighting on behalf of Lewis Philbrick, 86, who was with a group of Allied scientists who visited the site of the second atomic bomb about one month after the end of the war.

Within hours, his gums began to bleed, his teeth became loose and he developed sores on his lips. In 1984, Philbrick was diagnosed as having cancer. Seven operations—in which part of his jaw and skull had to be removed—have left him severely disfigured.

Philbrick, of Colchester in Essex, says he is not seeking compensation from the Ministry of Defence (MoD). All he wants, he told British media, is a meeting with ministry officials who have refused to meet him for five years, and recognition that his service led to years of suffering.

“All I can ask for is one-to-one talks, which would give me the chance to respond immediately to whatever the MoD representative comes back with”, he said.

He says he will never be able to escape the disease that has caused him such pain over the years.

“I can’t forget, because every time I look in the mirror, it is there”, he said. “My greatest worry is, ‘when is it coming back?’”

Philbrick’s experiences at the hands of MoD bureaucrats come as no shock to Lane, who spent more than three years as a prisoner of war (POW) after being captured at the fall of Singapore in February 1942.

“I am not in the least bit surprised”, the 93-year-old founder of NESA said in an interview from his home in Stockport, Cheshire, shortly before his death.

“The theory among the majority of those who served in the Second World War is that there was a war in Europe with several campaigns or clashes in Italy, Africa, the Middle East and the Pacific—and that was dubbed the American War”, Lane said.

“Over the years, it has become accepted fact [in Britain] that there was only one Second World War and that was in Germany”, he said.

According to Lane, there has been relatively little mention of British troops’ involvement in a number of clashes, from the 12-year guerrilla insurgency in Malaya starting in 1948, to the Mau Mau uprising in Kenya in the 1950s and, more recently, the roles the troops played in Oman, Bosnia, Kosovo, Sierra Leone, Iraq and Afghanistan.

“In every one of these campaigns, British soldiers gave their lives”, Lane said. “And for what?”

Lane campaigned for greater recognition for former British service personnel since forming NESA in the 1980s.

“The British government should follow the example of the Americans and show some respect to its veterans”, he said. “Even though, for some of us, it’s a bit late in the day. I am possibly one of the last former POWs of the Japanese and I had to fight for part of my war pension from 1949 until 1992, when I was finally awarded an 18% increase on a pension that was originally 13 shillings a week”.

Philbrick’s cousin was killed in the conflict in the Pacific. He was also among the teams that liberated POW camps and was one of the first people to witness the scale of the devastation wrought after the atomic bomb was dropped on Nagasaki on 9 August 1945.

Naval doctors diagnosed him as suffering from gingivitis and pleurisy.

“When I went to the doctor at the time, they didn’t take a great deal of notice because a lot of people were coming forward with symptoms and they were being put down to heat exhaustion”, he said.

After returning to Britain in 1946, Philbrick spent six months in Colchester Military Hospital before staying for extended spells in two other Royal Navy hospitals. 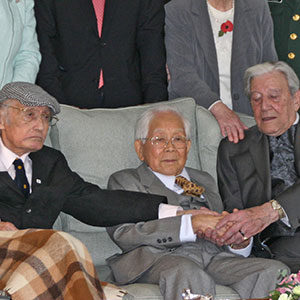 Teatime together 70 years on