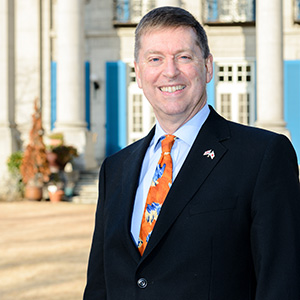 I am delighted to send a message to the readers of BCCJ ACUMEN to mark the official birthday of Her Majesty Queen Elizabeth II.

We celebrated the monarch’s official birthday in June because, as sovereign, she has two birthdays. The real birthday was on 21 April, when the queen turned 91. She is Britain’s longest serving monarch.

In Britain, the official birthday is celebrated with the Trooping of the Colour ceremony on Horseguards Parade in central London. This year, the event took place on Saturday, 17 June. It is a splendid spectacle—of military, horses and bands—that draws many visitors. I used to enjoy listening to the bands rehearsing their music, while sitting at my desk in the Foreign Office.

Earlier this year, Her Majesty’s husband and consort, HRH Prince Philip, who recently turned 96, announced that he would be stepping down from public duties in the autumn. Prince Philip has been a patron, president or member of some 780 organisations. The most famous of these is the Duke of Edinburgh awards, through which some 5mn young people in Britain, and another 3mn around the world, have achieved success in activities including voluntary work and expeditions.

The very warm relations between the British royal family and the Japanese imperial family, many members of whom have studied in the UK, are a fitting symbol of the close bilateral ties: political, economic, cultural and educational.

Following the recent general election, the queen invited Theresa May, as leader of the largest party in the House of Commons, to form a government. The Queen’s Speech to Parliament on 21 June set out the new government’s priorities. These will include delivering Brexit. We look forward to the Brexit negotiations producing an outcome that will benefit both the UK and the EU, and the many British firms who work in and with Japan. We are similarly confident that Britain will remain a very attractive base for Japanese business.

Earlier this year, I was present when Prime Minister Shinzo Abe met May at Chequers, her country residence. The two leaders discussed a wide range of areas of cooperation, and it was clear that there is a strong commitment to working even more closely together, as two countries that share so many values.

On Her Majesty’s birthday