On arrival, it is hard not to be overwhelmed by the atmosphere—the quiet sacred sense of Shinto. As sumo has its origin in this, Japan’s only indigenous religion, all the sport’s ceremonies are related to purification.

Ceremonial papers adorn the corners of the Tokyo training stable walls, there is a small shrine on a high shelf and a handmade straw rope on the sand-covered floor marks out the dohyo (ring).

In it, wrestlers will perform leg stomps to drive away evil spirits. Salt is piled at the side of the ring: a reminder that it is used to purify the ring before a bout.

In the simple room, the wrestlers are dressed in loincloths for morning training with their master, former professional sumo wrestler Hideaki Sakaigawa. While clearly focused on the task at hand, they extended a warm welcome to BCCJ ACUMEN. 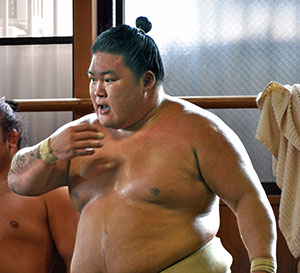 “I’m a man of few words”, said Gotaro Sawai, known by his ring name Goeido. The 29-year-old Osaka-born professional sumo wrestler’s way of talking is akin to that of a modern-day samurai. And, at 183cm tall, maintaining his “best” weight of 155kg, he looks like one, too.

“Sumo is my life”, he said. “I cannot imagine my life without sumo; I cannot imagine what I would be doing if I were not a sumo wrestler today”. Yet, he said his life has been a challenging one so far.

“I can’t say what my most difficult trial has been. Everyday is a trial for me”, he said. “Being a sumo wrestler is not that easy”.

Goeido believes the allure of sumo—Japan’s oldest sport—for him, his fans and supporters, as well as children who dream of being sumo wrestlers, lies in its traditions; it provides a glimpse of old Japan.

“In the past, Japanese men traditionally had a topknot, and we are the only ones who wear their hair in this way today”, he said. “I think people see the beauty not only of the competition, but also of the tradition; we show something of traditional Japan, which today we somehow seem to have forgotten”, he said, adding that he recognises this desire to maintain tradition in the UK, too.

He sees similarities between the British Royal and the Japanese Imperial families.

“I like the Royal Family’s way of protecting and preserving tradition; that really is something to admire”, he said.

He saw the participation in August of two wrestlers from the British Sumo Federation in the Sumo World Championships in Osaka as further connecting Japan and the UK through the world of sumo.

“I am really honoured to know that they are interested in our traditions”, he said. “I would be really happy if British people came to share in the real sumo tradition: to start with a bow and end with a bow. Sumo is not just a sport, and this is very, very important”. 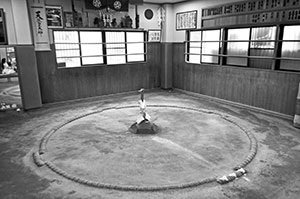 The ring is marked out by straw rope.

Every morning, the wrestlers in Goeido’s stable get up early and practice together until noon. They then shower and redo their hair in the traditional style, followed by a lunch of chankonabe (a stew combining fish, meat and vegetables).

“I usually have a nap in the afternoon”, Goeido said with a smile, “but I also go to a gym nearby for training. Then, in the evening, I generally go out for a yakiniku (Japanese-style BBQ) dinner, often with my supporters. To keep my best weight, I don’t eat rice. My favourite food is definitely yakiniku and I eat it almost everyday. In most of my free time, I sleep. I always sleep whenever I have time”.

“I don’t train my mind to win, because this feeling should come with physical training. Experience and confidence, which come from physical training, are all that matters. The mind or spirit should always follow the body”, he added.

Rise to the top

“When I was a child, I was naughty so my mum decided to send me to a nearby sumo tournament for children”, said Goeido. “I didn’t particularly like sumo at the beginning but, little by little, I became interested as I grew stronger; I loved the feeling of winning”.

While he tried a range of sports, including swimming and baseball, he decided to become a professional wrestler on entering Saitama Sakae High School, one of the most famous high schools for sumo. After having won 11 national titles—and handling the associated fame—while still a student at the school, Goeido made his professional debut in 2005.

All sumo wrestlers have their own shikona (ring name), and Goeido decided his with his master.

“Goeido is made up of three kanji (Japanese characters), he said. “The first, meaning ‘power’ and ‘splendour’, comes from my real name, Gotaro, and from my master’s name. The second, meaning ‘glory’ and ‘to shine’, comes from the name of my high school. The last, meaning ‘the way’, comes from the idea of the philosophy of sumo—training to cultivate its three principles, spirit, technique and body.

In 2007, he reached the makuuchi division, the top of the six divisions in professional sumo. Since then, Goeido has been regarded as one of the most promising wrestlers. In July 2014, the Japan Sumo Association appointed him ozeki (the second-highest rank after yokozuna). Reflecting the honour and perseverance in sumo, on hearing the decision he said he would “live up to the Yamato (Japanese) spirit”.

When asked what his goal is, he said: “without a doubt holding a championship cup”. There is pressure on Goeido that he will win, so he is striving to meet those high expectations. 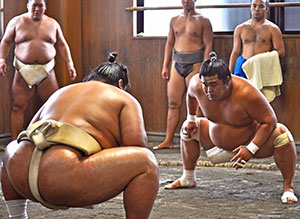 Goeido’s friend and rival, Yasunari Miyamoto (ring name Myogiryu) belongs to the same stable. Together they have been developing their skills through friendly rivalry since they were schoolmates. Like Goeido, Myogiryu has been considered an influential wrestler since his professional debut in 2009. Today he is sekiwake (third-highest rank).

Last spring, Myogiryu appeared in a green tea commercial, in which he showed that his body mass index comprises only 22% fat.

“I don’t really do anything special to keep my body in its condition except the usual sumo training”, he told BCCJ ACUMEN. “Goeido eats meat every day but I don’t usually eat meat; instead I eat fish”.

His motto is patience: a testament to having overcome a number of serious injuries. And, while his way of thinking might sound like that of a stoic athlete, there is another side to the wrestler.

“My hobby is collecting bags, especially leather ones”, he said, adding that he is a regular user of British brand Globe-Trotter.

Sakaigawa has been to the UK. In 1991, when he was still a sumo wrestler, he attended the Japan Festival at the Royal Albert Hall in London, which he said was “an amazing experience”.

“The UK and Japan share the same ideas of the way of chivalry and the warrior”, Sakaigawa told BCCJ ACUMEN. “I believe we somehow share a similar way of thinking, even though we are geographically distant”.

Grand sumo tournaments might be a chance for us to see these modern-day samurai, while also considering the importance of maintaining tradition through sport, especially when looking ahead to the Tokyo 2020 Olympic and Paralympic Games. 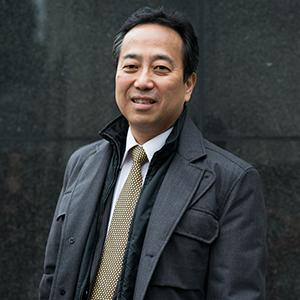