David Warren became British Ambassador to Japan in July 2008. Born in 1952, he graduated from Oxford University before joining the Foreign and Commonwealth Office (FCO) in 1975 and later studied Japanese at the School of African and Oriental Studies and at the British Embassy language school in Kamakura. His diplomatic career has included two previous postings to Japan; working in the Embassy’s Economic Section from 1978 to 1981 and as commercial counsellor from 1993 to 1998. Aside from a posting to Nairobi and a secondment to the Cabinet Office, he has focused on the Far East and trade issues, serving as deputy head of the FCO’s Far Eastern Department from 1990 to 1991 and from 1998 to 2000 as head of the China & Hong Kong Department. In 2000, he was appointed a director for British Trade International (now UK Trade & Investment) and in 2004 he became the FCO’s director of human resources and a member of the Board of Management. 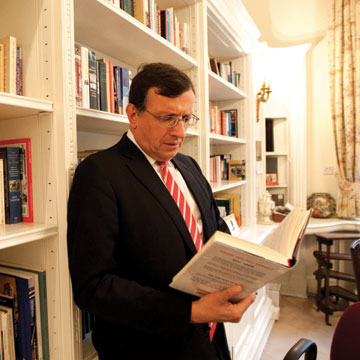 One of the great things about being British Ambassador in Tokyo is that no two days are alike. Unless I’ve got a breakfast meeting, I normally get into the office (one minute’s walk from my house in the Embassy compound) by about 8am to read the overnight email traffic. I try to clear correspondence by 9am to focus on the day’s meetings and calls. I read the newspapers and check the news websites. It’s as important for me to know what’s happening in the UK as in Japan — I must know what’s on the British Government’s mind as well as the Japanese Government’s.

I like to get out of the office as much as I can. The main thrust of our work is on trade and investment. I talk to firms that are investing or have invested in the UK to see how we can support them. Low carbon and renewable energy are high priorities. I call on ministers and key industry figures to encourage more ambitious Japanese targets for low carbon emissions, as a contribution to tackling climate change and agreeing a new international framework to succeed the Kyoto Convention.

People often imagine that I spend all my time at the Ministry of Foreign Affairs or talking to other diplomats. In fact, that takes up only a small proportion of my day. But of course I have to be ready to go to the ministry to discuss the latest developments in Afghanistan or the Middle East, to ensure that Japan understands our views ahead of major discussions in the United Nations, and that we are all pointing in the same direction.

I get together with my EU colleagues monthly. The agenda is usually dominated by trade. At the moment we’re considering whether to start negotiations on an EU-Japan Free Trade Agreement. The Japanese market is more open than when I first came to Japan in the late 1970s, but there’s still a lot of regulations holding back foreign investment. I get around as many Japanese ministries as possible to get this message across. I try to do as many calls as possible — and speeches — in Japanese. This means that I have to prepare carefully beforehand: I don’t want to be struggling for a word in the middle of the conversation! 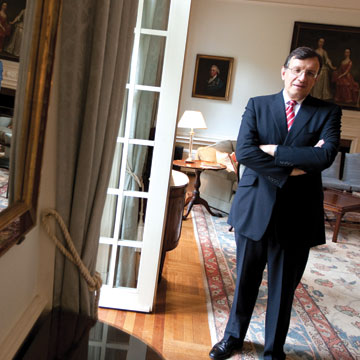 Diplomatic life is not one cocktail party after another! I go to very few. All the entertainment in the Embassy is business-focused or linked to visitors from the UK. In one week in early September, for example, we had the Royal Opera visiting Japan for the first time in 18 years; a reception for the University of East Anglia to promote closer educational partnerships, and we hosted a seminar on R&D in life sciences. On one Friday, we had an event for Lotus Cars, to which the president of Toyota Motor Corporation came.

We have a beautiful Embassy in central Tokyo, on a site we’ve had since 1872. I use it actively to promote the best of British. We did a big event a few weeks ago for BAE Systems to promote its Eurofighter, which we hope the Japan Air Self-Defense Force will buy next year. It’s good to do as much of this as I can with Pamela, my wife, but Japanese business life is pretty tough on spouses and partners, and it’s not always easy.
I have an excellent consular team, but I always keep an eye on cases that may become complicated or need my attention — there’s nothing more important reputationally than maintaining a high standard of services to the public.
I chair the Embassy’s Board, which includes our Consulate-General in Osaka, every six weeks. Resource pressures are intense, and like everyone else, we have to hit our targets while reducing our costs. As the British diplomatic network in Japan, we have to make sure that every pound we spend brings benefit to UK Plc.

I am proud to lead a strong and dedicated team in Japan, battling for Britain in this important but difficult market. Visits such as that of Foreign Secretary William Hague’s in July are major opportunities to fly the flag. But Britain and Japan have a strong relationship. On the trade and investment side, the links between the Embassy and the BCCJ really are a model.

At the end of the day, when the last guest has left the house, I go upstairs, hopefully with the energy to do at least a little bit of my homework for the next day! One thing I never have to worry about in this job is being bored.

More articles in My Day

My Blackberry alarm wakes me at 6am most days, just in time to organise myself and get to the pool at Atago Green Hills Forest Tower Spa for opening time 30 minutes later.