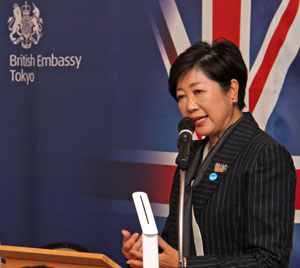 Against a backdrop of complex Brexit talks, Tokyo Governor Yuriko Koike (above) and Lord Mayor of the City of London, Charles Bowman, signed a memorandum of understanding (MoU) designed to deepen further the bilateral relationship in the financial services sector. On 4 December at the British Embassy Tokyo, with Bowman and guests live on screen from London, both leaders spoke about the agreement’s potential.

Better together
UK exports in financial services to Japan exceeded £4.6bn in 2016, according to the Office for National Statistics, a nearly 40% increase from 2015. Also during 2016, UK imports of Japanese financial and professional services hit £959mn. With the signing of the MoU, those involved are optimistic that these figures will grow.

“As the Tokyo Metropolitan Government seeks to develop Tokyo’s potential to become a global financial centre, we are pleased that you have chosen the City of London, the world’s top international financial hub, as your partner of choice”, said British Ambassador to Japan Paul Madden CMG.

In her opening remarks, Koike—who in her bid to further Tokyo’s globalisation also signed an agreement with the destination marketing firm NYC & Company on 10 November to cross-promote seasonal tourism between Tokyo and New York—emphasised her wish to truly establish the capital’s reputation as a global financial centre. “I will transform it into an international financial city that brings together capital, people and information from all over the world—and, of course, from Japan”, she said.

BCCJ ACUMEN asked Koike and Bowman whether there were any targets, goals or ways to measure the progress of the agreement.

Koike emphasised the need for a concrete schedule as soon as possible. “The Lord Mayor of the City of London has an opportunity to visit Tokyo next May … This will be a very good time to foster our relationship and help the future schedule”, Koike said.

Bowman echoed this, welcoming a new chapter in the relationship between the UK and Japan in the financial services sector. “I am thoroughly looking forward to coming out to Japan in May. We will be bringing with us a delegation that we thoroughly look forward to working with”. 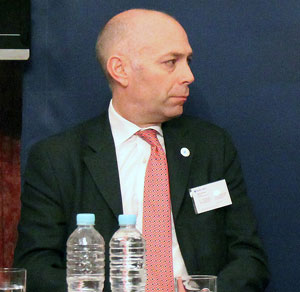 Work in progress
A panel discussion moderated by Neil Slater, chief executive officer of Aberdeen Standard Investments (Japan) Limited, followed and looked at some of the core issues within the financial services sector. On the panel were Professor Yuko Kawamoto of Waseda Business School; Mark Dearlove, chief executive officer of Barclays Securities Japan and a member of the British Chamber of Commerce in Japan’s Executive Committee, and Ben Cackett, head of global exports and investment at the City of London Corporation, the municipal governing body of the City of London.

Cackett believes there is a positive feeling in Tokyo around financial services, and that the Tokyo 2020 Olympic and Paralympic Games should be used to promote Tokyo as a hub. He said that the Olympics will give “Tokyo a huge global platform—like it did for London in 2012—to show the world that Tokyo is a regional hub for financial professional services and it’s at the cutting edge of innovation in areas such as fintech and green finance”.

He named specific campaigns and initiatives that support the growth of the City and experiences that can be shared with Tokyo, such as the setting up of Innovate Finance, the promotional trade body for fintech.

But the exchange between the two cities can come in more hands-on areas, Cackett added.

“Participation in the actual products and market, we’ve seen in the UK, is a particularly important way of helping to educate people; not just through theory, but through practice”.

Setting standards
Slater asked the panel whether there are more ways for the City of London and Tokyo to collaborate.

“This is a real opportunity for the city of Tokyo to set a standard, and become a standard bearer for green bonds”, said Dearlove, referring to bonds linked to climate change solutions. “I think there is a little bit of cynicism around what a green bond is, so there’s an opportunity for Tokyo and Japan to define that”.

When asked to name the one thing that should be changed in financial services, Kawamoto su­g­g­ested the need for change in the traditional culture surrounding Japan’s financial industry since, otherwise, Tokyo cannot achieve the status of a financial capital.

Dearlove said that the language barrier and some work practices of Japanese firms need to be addressed, but stressed that Japan has a well-structured market with transparent regulations, which is ideal for doing business.

“One thing that I would suggest based on a very brief visit is bringing together, in a cohesive place, a single entity that can promote Tokyo as a regional hub”, added Cackett.

When asked how Tokyo might sustain and develop financial services over the next three years, Kawamoto said she thought the support of London was vital.

“I am so glad this MoU has been signed, because so many times we have this kind of movement [towards establishing Tokyo as a financial capital] without any actual results”.