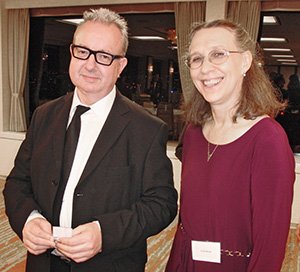 Toastmasters International, which has just marked its 90th anniversary, is a world leader in communication and leadership development.

The membership comprises more than 332,000 individuals, who improve their speaking and leadership skills by attending one of the 15,400 clubs in the 135 countries that make up a global network of meeting locations.

Japan is home to a number of such clubs scattered throughout the country; there are dozens in Tokyo alone. One of these—the Breakfast Toastmasters Club—recently celebrated its 25th anniversary.

Graham Harris OBE, former member of the British Chamber of Commerce in Japan’s Executive Committee, is a founder member and former president.

“There was an American Chamber of Commerce in Japan [ACCJ] Toastmasters Club that met at lunchtime, and there was a move to create a breakfast club, perhaps because the timing was more convenient or as a way of attracting more non-ACCJ members”, he told BCCJ ACUMEN.

“So, an ad was placed in the English-language press. It was brilliant: the image was simply a view from an aircraft window, cloud on cloud all the way to the horizon. The copy, in a small font, read, ‘If you doubt the existence of eternity, try to make a five-minute speech’”.

Harris was hooked. “I knew that in business I was avoiding opportunities to speak in front of an audience simply because I was not good at it and I realised that had to change”, he said.

The inaugural meeting of Tokyo Breakfast Toastmasters brought together newbies such as Harris and several experienced members from the ACCJ club so it got off to a fine start.

And it has thrived, although the personality of the club has changed quite often. Currently there are very few members under the age of 35, even though Toastmasters’ focus on soft skills would also help the career development of people in their twenties and thirties.

Today, the club enjoys a mix of nationalities—British, American, Australian, New Zealand, Italian and Japanese—which presents members with a distinctively diverse audience when making their speeches.

The club observed its 25th anniversary at the Tokai University Club on 2 October, with some 40 members in attendance. Harris was one of three after-dinner speakers, and chose as his topic three things he misses now that he no longer lives in Japan.

Perhaps not surprisingly, Breakfast Toastmasters was one of them. In fact, to attend the event he travelled from the UK, where he returned three years ago after having spent more than 30 years in Japan.

The other speakers were founder Daisuke Matsunaga, who had particular reminiscences of the club’s past, and incumbent President Vicki L Beyer, who entertained the gathering with anecdotes about misadventures in public speaking before joining Toastmasters—and how things have improved.

Beyer said her experience with Toastmasters has been extremely beneficial in her professional life, not least because she has learned how to listen—a much underrated skill.

That was a sentiment echoed by long-time member and former president Gordon O’Byrne, who served as MC for the evening.

“I’ve gained a number of things over the years, but the biggest thing is probably perspective”, he said. “When I joined the club I was quite comfortable with my abilities, but I suffered from delusions of adequacy. I learnt how to change the way I delivered my message, so that the audience actually cared about what I was saying”.

O’Byrne said that Toastmasters is for everyone, in that “the skills you learn are widely applicable”. However, he added, not all clubs are for everyone. “They vary drastically, so you have to find a club that matches your own goals, character and motivation for joining”, he said.

Breakfast Toastmasters is happy to welcome visitors at their meetings, which take place on the second and fourth Thursdays of each month at the Dai-ichi Hotel Tokyo in Minato Ward. Reservations, which are required, should be made with Kazuyo Ogawara, sergeant-at-arms, and information obtained from Andrew Edsall, vice-president membership.