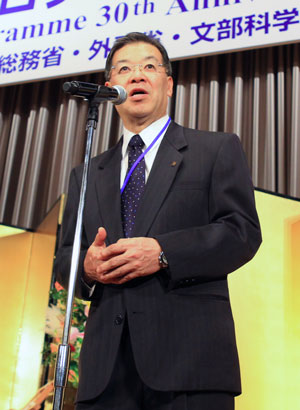 President of the Council of Local Authorities for International Relations, Keiji Yamada

In an increasingly globalised society, cross-cultural communication is more important than ever, with national exchanges being one major avenue for promoting understanding.

As one of the largest exchange programmes in the world, the Japan Exchange and Teaching (JET) Programme is at the forefront of foreign language education in Japan. And with the upcoming 2020 Tokyo Olympic and Paralympic Games, among other major international sporting events, an investment in foreign language communication has become more vital than ever.

This year, JET has been celebrating 30 years of the programme, which, since its inception in 1987, has seen about 65,000 participants from 65 countries. British participants represent 8% of this number. To celebrate the programme’s long success, the Ministry of Internal Affairs and Communications (MIC), Ministry of Foreign Affairs (MOFA), Ministry of Education, Culture, Sports, Science, and Technology (MEXT), and the Council of Local Authorities for International Relations (CLAIR) hosted an anniversary ceremony at the Keio Plaza Hotel in Shinjuku, Tokyo, on 7 November.

The 720-strong audience of current JETs and alumni was greeted by CLAIR’s Chairperson of the Board of Directors Tamotsu Okomoto, who highlighted the JET Prog-ramme’s broad reach and its ability to foster relations between Japan and other countries. It was this idea of “building bridges” that carried through the ceremony.

International ties
Beginning the opening speeches, MIC Minister Sanae Takaichi stressed the support that the programme has given local communities and young people.

“We expect [JET participants] will serve to increase interest in sport”, she said about sports exchange advisors, who specialise in a variety of sports and aid in coaching and teaching at schools across Japan, a key initiative with the upcoming 2020 Tokyo Olympic and Paralympic Games, and the 2019 Rugby World Cup. Hirokazu Matsuno, the minister for MEXT added to this that the promotion of international exchange is not just confined to schools, but also extends to communities, which will help to prepare regions for 2019 and 2020.

Minister for MOFA Fumio Kishida emphasised that it is through the programme that participants develop an understanding of the Japanese business environment. Many who return to their home countries can begin working as artists or practitioners of Japanese arts, or in the public services sector, and some even for Japanese firms.

Japanese Crown Prince Naruhito also praised the programme in an address to the audience.

Grassroots internationalisation across Japan was the main theme of the speeches that opened the ceremony, a point picked up by the Jamaican and Canadian ambassadors to Japan.

Jamaican Ambassador Ricardo Allicock told the audience about the recent Shitamachi bobsleigh initiative in Japan, where a bobsleigh was offered to the Jamaican bobsleigh team for the upcoming Korean Olympics. It is these projects and synergies, he explained, that have brought the two countries together.

“Feel the rhythm, feel the rhyme, get up, it’s bobsleigh time”, said Allicock, quoting the film Cool Runnings about the Jamaican bobsleigh team.

This is what he called “life-long bridge building, which only begins with language sharing”. He added that Jamaica has entered into the first sister agreement between Japan and any Caribbean nation.

Ambassador of Canada to Japan Ian Burney echoed similar sentiments, adding that the programme is an “exceptionally farsighted and wise investment in public diplomacy by the Japanese government”.

Future thoughts
Following the speeches and a presentation by Emiko Okuyama, mayor of Sendai City, with Melissa Hill, Sendai City Coordinator for International Relations, was an entertaining performance from three 6th grade students and their teacher from Goto Municipal Sakiyama Elementary School and the Goto City assistant language teacher (ALT), showcasing some of Goto City’s attractions.

Highlighting the transference of skills from the programme to other careers was former ALT James Regent, who now works in the controller office at the trading firm Sojitz Corporation, and Yoji Abe, manager of global HR and HR development at Sojitz. Both highlighted the attributes of JET participants that make them an attractive choice for international firms.

Kenneth Price, from the UK, is an alumnus who decided to stay in Japan, and he now works at Sojitz in human resources.

“As a rural JET, there were very few English speakers in the area and I had to learn how to adapt to a situation where there are language barriers. In my current position working in a Japanese trading company, I deal with people from all over the world where English isn’t their first language”, he said about the programme. He added that it also made him “sensitive to differences in culture all over the world”.

He concluded, “Most employers are looking for foreign nationals who can adapt to any situation and work alongside Japanese employees. If you can prove that you have these qualities, job hunting will be much easier”.

A much-anticipated video competition closed the celebration, showcasing a variety of cultural experiences in Japan through the eyes of different JET participants. The videos included the winner, Ekin Kabuki Festival, Akaoka, Japan, by Alexander Barnett from Kochi Prefecture, and the recipient of the Best Idea Award, A Gourmet Tour of Aomori, by Soo Young Park from Aomori Prefecture.

The evening reception that followed the main event included welcoming remarks from CLAIR President Keiji Yamada, and performances from the taiko drum group Sai-ryu and from a ukulele “ukestra”.

Just as Ambassador Ricardo Allicock explained in his parting words, there are two “irrefutable” factors to consider for JETs as they continue their journey in Japan. First, as potentially the sole representative from their country in their community, “it is imperative that you wear your distinct national personality with grace and sensitivity”.

Second, he encouraged JETs to embrace the relationships they create.

“Get in the habit of seeing yourselves for what you are: community-level ambassadors for your country who are planting seeds today which will reap a significant harvest tomorrow”.

From caution to commitment: finding a global view