Now in its 30th year, the Japan Exchange and Teaching (JET) Programme has welcomed more than 62,000 people from 65 countries to deliver grassroots international exchange between Japan and other nations. This column features former JET Programme participants who keep the idea of fostering mutual understanding firmly at heart. 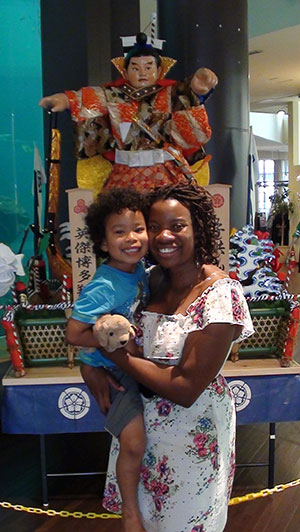 Gamu Matarira with her young son in Japan.

At age 12, my family and I hosted a Japanese delegate who was visiting Zimbabwe for a medical conference. During her short stay, I was mesmerised by her elegance, the stark difference between her traditional clothing and everyday business attire, and her beauty. Every Sunday I would read the phrases she’d written in romanised Japanese.

Little did I know that the three days we spent together would, for decades, greatly influence my curious mind.

Twelve years later, in 2004, I came across an advert to be an assistant language teacher on the Japan Exchange and Teaching (JET) Programme and decided it was time to head east. After a successful application, I was posted to Fukuoka Prefecture.

My boss took on the role of father as he did more than just plan the school postings for me and my colleagues. As well as being assigned to eight junior high schools, I frequently taught at elementary and high schools. I also ran classes for children with special needs or who were hospitalised.

I worked with more than 4,000 students of all levels and abilities and was a judge for national public speaking contests at high schools. Through participation in extra-curricular activities, I built a lasting rapport with staff, students and the wider community.

Living in Japan presented several challenges, so I began language and culture classes twice weekly to aid my cultural assimilation. My colleagues regularly invited me to karaoke evenings and local events. I even took up shamisen classes where I learned to play the three-stringed instrument. I volunteered part-time in a former JET Programme participant’s business, where my language skills further developed as I pulled pints of beer and mixed drinks for local customers.

As my confidence grew I took on more responsibility. I volunteered at the Tokyo orientation for new JET Programme participants and made a presentation entitled “Cross-cultural team-teaching”. Because of this exposure I became quite proficient in Japanese. In 2007, I married a Japanese national and we had a son. Living with the in-laws accelerated my language skills to the extent that I decided I would make use of them in my next role back in the UK.

My time in Fukuoka was both fulfilling and rewarding but, after three years in the role, my husband and I returned to the UK. I became a highly desired candidate back in London, with offers from Japanese accountancy firms, as this was my major at that time. However, I was no longer interested in accounting and finance, so I started teaching English and Japanese privately while I maximised having time with my young son.

When I was ready to return to work full-time, I became a lecturer of business and language studies at the University of Hertfordshire. I taught and designed assessments for Japanese courses alongside business and English programmes.

Because of the limited number of Japanese-speaking staff and those with experience of East Asia, I was nominated student experience tutor within the School of Humanities. In this role, I had close interaction with East Asian students—the vast majority of international students at the university—of whom I have a deep understanding. I designed learning strategies for them.

I also read a Master of Science degree focusing on how diversity can be used as a resource in embedded learning, which takes place during daily classroom activities and routines. My specific area of exploration was cultures of Confucian heritage. Following this research, I ran seminars on culture to help my colleagues.

I recently relocated to work in the Middle East, where I’m learning about yet another culture and language. My time in Japan has, inevitably, had an impact on my future and will continue to do so. My son is proud of his heritage, and Fukuoka remains a second home to us both.

From caution to commitment: finding a global view