These days, modern forecasting systems typically involve a super computer with big data in the cloud. Feng shui, on the other hand, requires no such technology and was developed thousands of years ago.

The practice relies on the five elements—wood, fire, earth, metal and water—along with the 12 animals of the Chinese zodiac and 24 compass directions. Sometimes old ways are good.

I would like to share some important indications for this Year of the Wood Horse, which, according to the lunar calendar, begins on 31 January.

Ring of fire
This is a fiery and rebellious year and it’s important to recognise that before too much of the year has passed. Even though the new year began only recently, the Earth’s energy already is shifting. 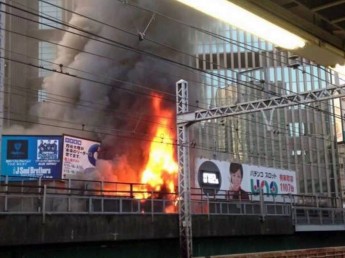 A fire near Tokyo's Yurakucho Station on 3 January

In Japan, we experienced a massive fire during the New Year holiday according to the Western calendar. Fires in Tokyo’s Yurakucho and a blast at a Mitsubishi Materials Corp.’s chemical plant, in the central Japan city of Yokkaichi, caught the attention of the nation.

Outside Japan, there was a fire in the ancient Tibetan town of Dukezong, in the south-western Chinese province of Yunnan; an eruption on Mt Etna in Italy; and volcanic activity in Indonesia. Already this year the element of fire has been very strong.

In such a fiery year as this, anger management will be necessary. Tempers will flare unexpectedly and wrathful energy will come from even the closest of friends. Many of us have already felt the changes in the air.

Tough year for men
The business mood in 2014 will be competitive and marked by conflict in all industries, which will exhaust everyone.

Five Yellow brings severe illness, financial loss, and obstacles to success. It is also known to cause hostility. When men are afflicted with it, they tend to make unwise decisions. Male leaders will face challenges both in business and at home.

However, women in positions of leadership will be blessed by an auspicious star so, relatively speaking, females will be stronger.

Timing
The first two quarters of 2014 are likely to be productive, with many opportunities for success. August will mark the turning point. In the latter half of the year, we will see some kind of crash, probably in December.

It would be wise to conclude important issues, investments and contracts in first half of the year.

Relationships
Everyone will tend to be irritable, nervous and angry this year. There will be many fights, arguments and court cases everywhere. My advice is to take a deep breath before engaging in counter-arguments.

Love life
As the star indicating romance is situated in a central position on the 2014 chart, there will be plenty of opportunities for romance. Single people will have a good year.

However, the feng shui chart says this year’s romance will be “external”, so don’t invest too much in new trysts. Assess carefully if a new partner is right for you before falling in love.

Mature couples will need to protect against infidelity. We’ve already seen how this star can be dangerous, based on French President Francois Hollande’s extramarital affair that has recently come to light.

Natural disasters
In addition to the fire-related disasters mentioned above, gas explosions are likely to increase due to the presence of numerous fire elements.

There will also be a serious water shortage and disasters such as earthquakes, since the water and earth elements are missing in the feng shui chart.

Health
Luck in matters of physical health will not be stable for everyone this year. Body heat will be higher than usual, so make sure to cool down when needed. The number of injuries related to the lungs, chest, arms and legs will increase. Men will have a weaker constitution than women.

Remember, as the famous proverb goes, “A wise man keeps away from danger”.