From supplying back-up electricity genera­tors and building the temporary triathlon venue to delivering large Lego-like blocks that whip up white water on the canoe and kayak course, UK firms—with the help of the Department for International Trade Sports Economy sector team at the British Embassy Tokyo­—are playing major behind-the-scenes roles in this summer’s Tokyo 2020 Olympic and Paralympic Games. Two better-known names in the business, Aggreko Events Services and ES Global Ltd, were able to leverage their track records at previous Games to win contracts.

Temporary electricity generation is critical for events such as the Olympics.

Glasgow-based Aggreko signed a $200 million deal to provide a range of temporary energy delivery systems and related services, including 2,500km of cable, 5,500 distribution panels and mobile electricity generators at the Olympic Village, the International Broadcasting Centre and 44 sports venues—just in case there’s a power grid failure during the Games. Organisers will also rely on Aggreko’s power units during the opening and closing ceremonies to ensure there are no interruptions in the television broadcast to millions of viewers worldwide.

Aggreko has been a fixture at the Olympics for years, going back to the 1988 Summer Games in Seoul. In Tokyo, it is the only British-linked firm among the 66 official Olympic partners and sponsors, which are split into four levels with Worldwide Olympic Partners such as The Coca-Cola Company, Toyota Motor Corporation and Visa Inc. at the top. Three tiers of mostly Japanese firms beneath are given varying degrees of permission to use Olympic branding and, in some cases, exclusive rights in certain types of businesses, such as Aggreko’s category: temporary electricity generation.

At past Olympics, including London 2012, Aggreko typically faced intensely competitive bidding to win contracts. For Tokyo, discussions with organisers started in 2015 and involved numerous meetings over three years to identify solutions for the supply of temporary electricity generation to the Games, said Managing Director Robert Wells. Only after Aggreko’s proposed solutions had been put through a rigorous procurement and benchmarking process—and the parties had agreed on the terms of appointment as an official supporter—was it able to secure a supply agreement without entering a tender process, he said.

The firm had also earned a favourable image in Japan in the aftermath of the Great East Japan Earthquake and Tsunami of 11 March, 2011, when it deployed its mobile power generators around the disaster zone.

“We had a huge track record in delivering these types of games—not just the Olympics, but Super Bowls, Ryder Cups and Commonwealth Games,” Wells said. “But we still had to convince them, we still had to pass”.

Aggreko was a power partner to London 2012.

As part of its contract, Aggreko offered Tokyo organisers a value-in-kind on its services in exchange for becoming a Tier-3 official supporter, Wells told ACUMEN. This permits the firm to participate in Tokyo 2020’s Marketing Programme and be given rights to use certain of Tokyo 2020’s Olympic and Paralympic designations and imagery, including emblems, mascots and slogans. Aggreko cannot, however, display its logo on products during the 24 July–9 August Games. That is a right reserved for only the top partners.

The biggest reason for becoming an official sponsor, Wells said, was for exclusivity. Being the sole provider of temporary electricity generation at the Games reinforces the firm’s link to the Olympics, strengthening its case for future bids.

“We can market our association with the Olympic Games. And when you become an official supporter, you are in effect part of the Games family,” Wells said. “I’m already working on Beijing [host of the 2022 Winter Games]. So, one of the reasons we do it is for that handover from one Games to another”. 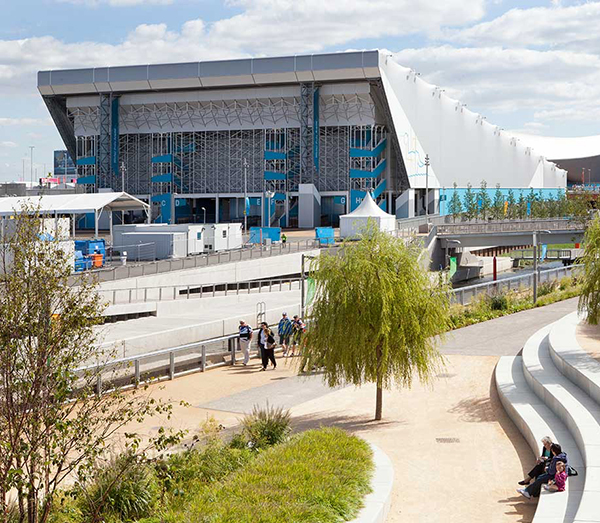 ES Global, which builds and tears down temporary venues—called “overlay” in Olympic parlance—beat out four or five competitors to win contracts in Tokyo, explained Director Jeff Burke. The London-based firm will be involved in building and dismantling for six events.

Such overlay projects are a growing trend in the Olympics so as not to leave “white elephant” structures that sit unused. For example, materials for the London water polo arena were later used to build a temporary training facility at the Sochi 2014 Winter Games. That was then dismantled and rebuilt as a permanent cycling velodrome in Jakarta, Indonesia. “It’s a very sustainable way of delivering large Olympic venues,” Burke said.

The firm, which got its start setting up stages for the Rolling Stones in the late 1970s, has been involved in every Olympic Games since Sydney in 2000, except for Beijing in 2008. But Tokyo is ES Global’s biggest Olympics so far. For the triathlon, the firm has 10 days to set up the 10,000m2 transi­tion deck in Odaiba and five days to dismantle it—a feat Burke is confident his staff can pull off, as they have done it many times and successfully ran a test build in Tokyo in August. Screw piles—anchors that screw into the ground and can later be with­drawn—are being used for the Tokyo overlay.

ES Global won all the bids in which it participated. While the firm is under non-disclosure agreements and cannot reveal contract details, Burke said that the bidding process was “open and transparent”.

Bidders’ questions were submitted through a single portal and planners’ answers were sent back to everyone. All bidders submitted a financial bid and a technical bid, which were opened in front of all the bidders “so there’s no mystery,” Burke said. ES Global won the financial bid in each case and, after a careful review of the technical bid for any gaps or inconsistencies, was granted the contracts.

“Everybody is hugely respectful of the process,” Burke said. “You can’t circumnavigate it”.

ES Global plans to set up its Asian base in Japan instead of leaving after the Games, as it generally has done after past events. From Japan, the firm is aiming for contracts at several major upcoming events in Asia, including the Beijing 2022 Olympic and Paralympic Games and the World Expo 2025

“We’re not packing up and going home after the Olympics,” Burke said. “We’re building our Asia–Pacific business around what we’re doing in Tokyo”. 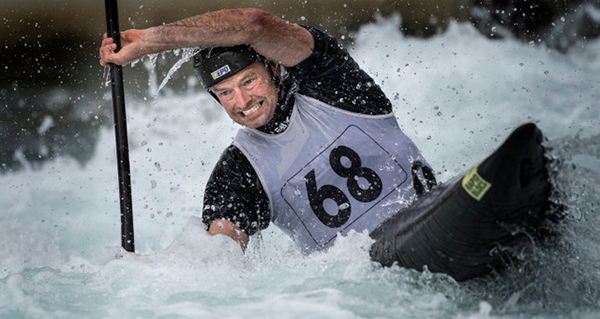 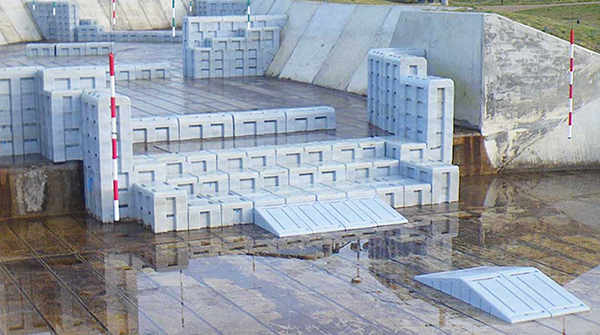 RapidBlocs are used to create waves and currents on the course.

Another UK firm that did have success is RapidBlocs. The small outfit based in Cumbria, northern England, makes the obstacles that generate the waves and currents in artificial white-water channels used for rafting and the Olympic sport of canoe slalom. Director Andy Laird said the firm got its break at London 2012. Since then, RapidBlocs has won contracts to supply the obstacles—but not the course design—for Rio 2016 and now Tokyo 2020. The blocks are also installed in the course that will be used in Paris 2024.

Laird started his business in 2008 after refur­bishing a white-water course in the UK. Seeing what he felt were shortcomings in a dated system used there, he decided to design his own.

“The window of opportunity was London 2012,” he said. “I won the channel design there—it was a design and build. We rushed through a patent, prototyped it, went crazy working right through the night at times. We installed it and, since then, it’s been the incumbent system globally”.

For Tokyo, it was a two-way competition between RapidBlocs and Hydrostadium, owned by the French energy firm EDF Group, Laird said. Before submitting his bid, Laird made a couple of trips to Tokyo for meetings with his agent, the Tokyo Metropolitan Government, the civil engineering firm that designed the course and the British Embassy Tokyo, which offered a letter of support and was hugely encouraging and helpful, he said.

After winning the bid, RapidBlocs shipped the equipment to Japan. It was installed in the concrete course in Kasai Rinkai Park, near Tokyo Disneyland.

Laird won’t disclose the size of the contract, saying only that it was “substantial, but not our biggest”. That distinction goes to one for a white-water course in Oklahoma. “It’s clearly prestigious” to win the Olympic bid. “The legacy’s there—we’re doing four Games”.

Stage engineers that specialise in suspending, elevating and moving equipment and people.