JMBACC was organised under the leadership of students from the McGill MBA Japan Program, Hitotsubashi University, Tsukuba University, Doshisha University and other prominent business schools in Japan.

The purpose is to highlight the capabilities of MBA students here, and to bring students together for a friendly competition.

Similar case competitions are held throughout North America, Europe and other parts of Asia. The basic idea is that teams from Master of Business Administration programmes at different universities compete to solve a business case. The case typically involves a protagonist at a company facing a difficult situation or opportunity.

These cases are an important learning tool, and are used as part of management curricula worldwide. 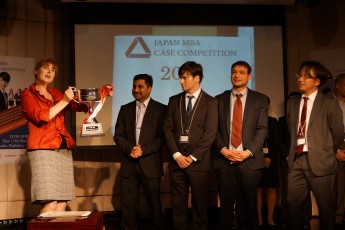 The McGill team took first place in the contest.

Perhaps the most famous example of the case method is its use in the curriculum at Harvard Business School.

Many schools around the world write their own cases and decide how to use them. In classrooms, cases are often used to spark discussion on a wide range of topics.

In the competition, teams work to analyse the scenario presented in a case, and devise a set of solutions or business recommendations to overcome the issue.

Each team prepares a PowerPoint presentation, and delivers their findings and recommendations in English. Business people from the community act as judges on a panel.

JMBACC judges play the role of company executives who the teams must try to convince to hire them as consultants. This experience is extremely relevant to business school students, who may well find themselves on either side of such situations in the future.

The 2013 JMBACC had two rounds, with teams from Waseda University, Globis University, and McGill competing in the finals. The case was about GREE, Inc., a well-known online gaming firm in Japan.

The judges included Jesper Koll, an economist; Patricia Bader-Johnston, a business executive; senior directors from several consulting firms and officials from the Embassy of Canada to Japan.

In the end, the McGill MBA Japan team, of the Desautels Faculty of Management of McGill University, came out on top. The winning team included Deb Tripathy, Satish Juriani, Lyal Clough and Taka Ishikawa.

The runners up, however, gave excellent presentations. More than 100 spectators attended the competition and awards ceremony.

The second JMBACC is being planned for November 2014—get your teams together soon!