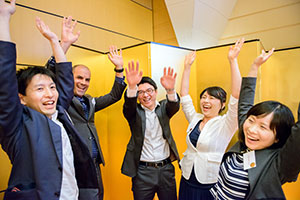 The 22nd Japan Market Expansion Competition (JMEC) has produced a new crop of capable business people, with a five-strong team emerging as the overall winner of the 2016 event for their business plan for Fusion Systems.

Twelve teams from a wide variety of backgrounds took part in JMEC 22. The winners of the annual event were announced during a ceremony at the Tokyo American Club on 7 June.

“We are here to celebrate the success of this year’s 58 JMEC participants and announce the winners”, Tom Whitson, chairman of JMEC, told attendees.

“I would like to congratulate all of our participants, who are joining more than 1,000 alums who have similarly completed the competition”, he said.

Founded by the Australian and New Zealand Chamber of Commerce in Japan in 1993, the competition is supported by 18 foreign chambers of commerce in Japan.

JMEC is designed to encourage entrants to work in teams to hone their executive skills, while simultaneously assisting foreign firms by developing a high-quality business plan tailored to the Japanese market.

According to Whitson, the teams endured two months of lectures on subjects that were completely new to them, before spending the next five months applying what they had learned to a business plan for a sector “way outside their area of expertise”.

“All of the project team members have given up a lot in the last seven months—social life, family, friends and sleep—but I hope they feel that the experience and comradeship that they have developed has all been worth it”, he added.

The 12 entries were judged by a three-strong panel made up of Georg Loeer, president and representative director of NRW Japan K.K.; Debbie Howard, chairman of CarterJMRN K.K.; and Rike Wooten, president of Gotairiku Partners K.K.

Wooten pointed out that each team had put in between 1,200 and 1,600 hours on their business plan.

And while the top three teams were placed within 12 percentage points, the difference between the third- and fourth-place teams was less than a single percent.

Team A were named the winners for their plan for software solutions firm Fusion Systems. Each received a round-trip ticket to Europe with Finnair, a year’s membership of the ACCJ and a ticket to an ACCJ event. Mitch Murata acted as mentor and Jay Johannesen served as their consultant.

Second place was taken by team Happy Hippies for their client Ardo, a frozen vegetable and herb producer. Each member won a Hewlett Packard tablet and a year’s membership of the ACCJ.

Team 7 was awarded the third place prize for its plan for Impetux Optics S.L., a provider of optical tweezer technology. Members each received a tausche brand bag and a ticket to one of the ACCJ’s “nommunication” (communicating while drinking) networking events.

As has become traditional, the judges also gave some additional awards, with team Tokyo Tower taking the plaudits for the best oral presentation and team JAC United accepting the “Telling it like it is” prize for bravely suggesting to their client that they should probably reconsider attempting to enter the Japanese market.

Team Pocky was recognised for “overcoming serious handicaps and shortcomings to get their business plan across the finishing line”, earning them the Fighting Spirit Award.

The JMEC 23 programme is scheduled to begin in November, with information seminars held in advance for potential participants to find out more about the scheme.

The schedule for the coming year has been broken down into four phases, with the first period of training running from November to January. Lectures and workshops focused on entry into the Japanese market and business planning will be followed by a three-month period of business plan preparation.

With guidance from a mentor and a business consultant, the plan will include business strategy, marketing, distribution, finance, organisation, human resources and legal issues.

Judging will commence in April 2017 on the basis of written and oral presentations, with winners to be announced in June 2017.