A snapshot of my recent trip to the UK 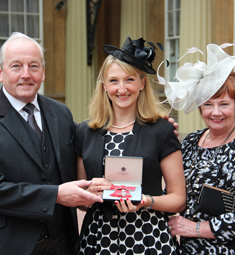 Accompanied by my parents and brother, I collected my MBE (Member of the Most Excellent Order of the British Empire) at Buckingham Palace on 7 June.

I was honoured to receive the medal for services to post-earthquake reconstruction and to the British business community in Japan, awarded in The Queen’s 2013 New Year Honours List.

Words cannot really do justice to the splendour of the investiture experience; suffice to say that no one delivers fanfare, ceremony and tradition quite like the British.

During my trip to the UK I had the opportunity to speak at the graduation ceremony of my old high school about my journey from Dundee to the BCCJ via the University of St Andrews.

I’m not afraid to admit that I hadn’t felt as nervous in a long time at the thought of facing a gym full of 400 teenagers. This is proof, perhaps, that no matter how far you think you’ve come, or how much you feel you’ve achieved, the thought of getting ready for high school still has the power to make one feel a little queasy.

Another crowd I faced was a class of 30, comprising five-year-olds, for whom I assumed the role of mystery reader at my nephew’s primary school in Epsom, Surrey.

After talking about Japan and the 2011 Tohoku earthquake and tsunami, I was asked a number of probing questions such as “Why didn’t your building fall down?” and “Have you been to Spain?”.

On 10 June I visited the Japan Chamber of Commerce and Industry (JCCI) in London and discussed a variety of possible synergies between our organisations, including private sector support for the Japan Matsuri, scheduled to take place in Trafalgar Square on 4 October.

I have since connected the JCCI with the British Council in Japan, regarding a forthcoming mission to the UK, where a JCCI member will address Japanese students on the theme of global jinzai.

On the same day, I met the BBC World Business Matters team at the BBC’s new headquarters. In the summer, I will appear on the programme. It is a live show, with discussion of the business and economic news it covers, aimed at listeners in the US and Asia.

The BBC is interested in connecting with BCCJ members regarding current affairs in the region, so please stay tuned for more information.

Later, I was lucky enough to be given a guided tour of the House of Commons and the House of Lords by Lord Jack McConnell, the first minister of Scotland (2001–2007).

On 11 June, I spoke at the Japan Society on “The Road to Recovery”, detailing five lessons that were learned from the BCCJ’s post-3/11 relief and reconstruction activities.

Moderated by Sir David Warren, the presentation on our Back to Business initiative prompted a lively 45-minute question and answer session, with many of the audience keen to hear what was happening on the ground in Tohoku. Hosted at JETRO, the event will be covered by Kyodo News later this month.