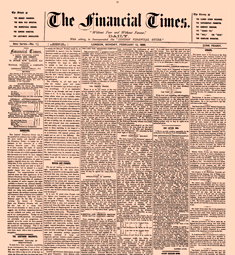 First issue was published in London on 13 February 1888.

Enemy of the Bull and Bear marks 125 years

Famously pink and the must-read publication for anyone in the business world, the Financial Times recently marked its 125th birthday.

The lead story in the inaugural edition—which cost one penny—was headlined “The Southern Railways: Temporary Rupture of Negotiations”. An explanation of the new publication’s aim styled it as the friend of the “honest financier” and the enemy of both the bull and the bear.

While, over the intervening years, the paper may have changed in appearance and now be available on platforms that were inconceivable to its original editor, the FT’s values remain the same.

“It’s the usefulness of the content”, said Angela Mackay, managing director of the paper’s operations in the Asia–Pacific region, when asked the secret of its longevity.

“People turn to it every day for not so much the hard news, but for the interpretation of economics, business and geopolitics”, Mackay said. “A person in business can look in [the FT] and find something that will help them make a decision every day. It has relevance”.

Another popular attribute of the publication has been the evolution of its weekend version, which “really switches gears” with its focus on fashion, art, books, travel and leisure, she said.

As one of the world’s key financial hubs, Japan has always been an important location for the FT, which has a staff of 19 who are located in offices that overlook the Imperial Palace in central Tokyo.

“Japan is the second-biggest source of advertising and subscriptions for us in the region, after Hong Kong, and the market here has clearly bounced back since the trials and tribulations of the [2011 Tohoku] earthquake and tsunami”, she added. “The momentum that we picked up in 2012 is carrying on into 2013 and, across the Asia–Pacific [region], the digital side of our business grew 33% year on year—double every other region”.

Subscriptions in Japan to the online version of the paper are at a record high of 316,000, while the number of people who sign up for the printed version pushes total subscriptions here up to 602,000.

The FT has its competitors—in increasing numbers since the explosion of online media—but the newspaper’s integrity and reputation count for a great deal in its campaign for readership.

“It is a constant battle because we have to show that we have the very best content, but we are lucky to have prestige, to be respected and be a respectable brand”, she explained.

The respectability means that there are some business people who refuse to be interviewed by journalists from any other publication, while it also enables the FT to attract heavy-hitting guest editors such as US economist Lawrence Summers.

However, the broadsheet was sufficiently astute, in the early years of the internet revolution that engulfed the media, to know that it could not afford to rest on its pink paper laurels.

FT.com was launched in 1995, and the FT Alphaville blog—winner of the Best Business Blog in the 2008 and 2009 Webby Awards—was started in 2006. The website’s metered pay model was introduced in 2007 and was subsequently adopted by other leading newspapers, including The Daily Telegraph and the New York Times.

In 2012, the number of subscribers to FT.com overtook the number of those to the print version. Available on everything from smartphones and tablets to desktops and e-readers, the FT is immediate and accessible in every marketplace, and is unencumbered by delivery deadlines, Mackay added.

“It was very important to get the transition from print to digital right”, she said. “We are doing very well but there is also a constant danger of twiddling too much. There has to be flexibility and we are constantly monitoring [sales] to keep up with the pace and pressures of new and social media”.

In addition, the FT has numerous products that are used in business schools, and can count 25 of the world’s top 50 business schools as clients—something that the paper is planning to build on. There are also plans for a major drive into the Chinese market, while FTChinese.com already has 2mn readers.

In Japan, the FT announced in late March an extensive collaboration with Nikkei Inc. that will cover content syndication, sales, education and events, such as symposiums and seminars that could attract global leaders in politics, economics and business.

“We are trying to spread out and look at new areas and opportunities—although not too much”, she explained. “After all, after 125 years, we know what we do well and plan to continue doing that”. 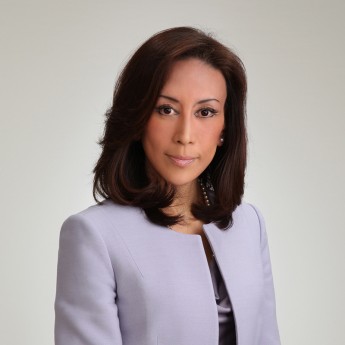