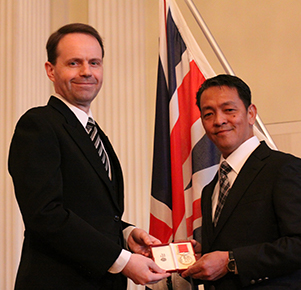 Not just a caring father and husband, but also a reliable, supportive and outstanding employee, Fernando Bangit is a true inspiration. His dedication proves that hard work pays off. For his exceptional service to the British Embassy Tokyo, the Queen conferred upon him an Honorary British Empire Medal.

He has done almost every support job possible at the embassy, and has consistently tried his best to be a helpful colleague in all types of situations, from assisting the set-up of events to dealing with emergencies.

Hard work
Born in the province of Pampanga in the Philippines, Fernando joined the embassy in 1991 as a part-time employee. In the following year, he started working there full-time. But the road to joining was not an easy one.

“It was very tough because I did not speak any Japanese, but luckily with perseverance I had convinced the head gardener Shiokawa-san and the technical work supervisors to hire me, even if only for a few hours a week to sweep leaves and pull weeds”, he said. Sir Graham Fry, then the head of chancery, kindly sponsored Fernando’s visa. Regarding the influence on his private life, Fernando revealed that working at the embassy has not only impacted his life in positive ways, but that it also became a significant part of his life.

“Working for the embassy certainly made me feel more secure in my life. Having such a supporting community allowed me to work and raise my family in a healthy environment.” His two sons, who were born and raised in Japan, went to an international school in Tokyo. Today, his eldest son is working in Fukuoka for a financial investment firm, while his younger son is finishing high school and is hoping to go to university in the UK. “I am very grateful and thankful that I work here and live inside the compound as well”, he added.

Doing his best
During his many years at the embassy, Fernando has gathered countless memorable moments, experiencing the embassy in good times, as well as bad.

The year “2011 is one of the most memorable years, because of the earthquake and tsunami”, he said. “It was tragic, but it also showed hope, seeing how quickly everybody at the embassy responded to the crisis. I hope that it will never happen again, but I will always be prepared to help and contribute the best I can”.

Fernando has seen how the embassy has transformed over the years, and he recalled certain changes.

“There used to be a shop called Gate House Shop in the embassy compound. It opened on Fridays for British staff to purchase British products that were not available in Japan. “It is long gone, as you can find quite a few British products easily nowadays and also via online shopping”, he added.

Great service
Fernando has also seen, served and met his fair share of famous visitors at the embassy, with Princess Diana in 1995 and then-prime minister Tony Blair and Prince Andrew in 1998 among the most prominent.

“I waited on Prince Andrew during the whole event, and recently Prince William in 2015”, he said.

When he’s not working at the embassy, Fernando helps his wife, Flor, with the catering business she runs, and is always searching for new ways to innovate and improve their services, while also providing waiting and event support.

For Fernando, the hardest part of his job is when his efforts and good intentions become futile. Yet, when these efforts make even just a little difference, he views this as the best part of his job. The same can be said for his involvement in his wife’s catering firm.

Upon receiving the award, Fernando felt embarrassed, as he believes there are more deserving colleagues than him. However, his friends and colleagues at the embassy fully supported him and showed their genuine happiness for him.

“I am very grateful for all the appreciation”, he said. 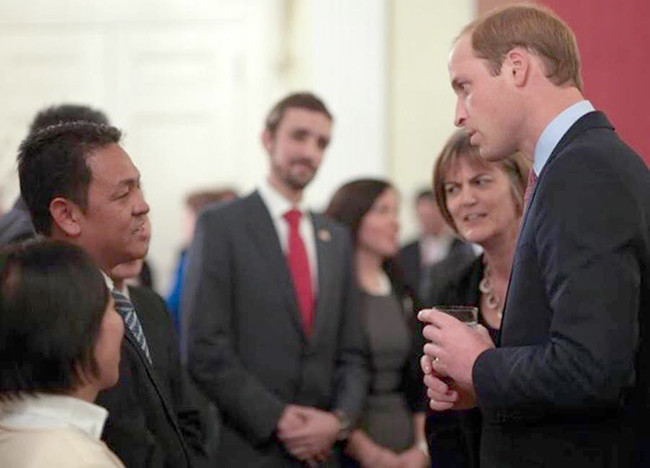